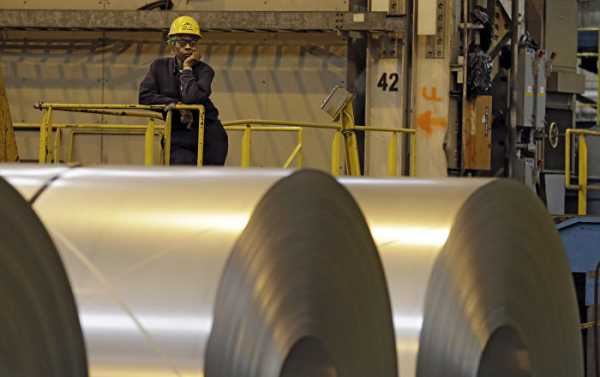 German Chancellor Angela Merkel is seeking to narrow her country’s trade surpluses and stimulate domestic consumption in a bid to ease trade tensions with the US and reduce Germany’s exposure to increasingly volatile foreign markets.

Kristian Rouz – German Chancellor Angela Merkel speaks in defense of her country’s massive trade surplus, saying it is positive for the Eurozone economy. She also noted the German current account surplus has narrowed recently due to a pickup in domestic demand, and her cabinet is trying to support this trend.

However, Chancellor Merkel also said fluctuations in global oil prices and currency volatility could affect Germany’s trade performance, and these two factors are outside of her cabinet’s control.

“And of course, the trade surpluses show that our products are in demand. And we naturally want that to remain so in the future,” she said.

This comes as the Eurozone economy, according to preliminary estimates, is set to post robust acceleration in the first quarter of this year, while inflation is still lagging behind the European Central Bank’s (ECB) 2-percent target.

Besides, Germany is involved in an unfolding trade dispute with the US, as President Donald Trump recently criticized Berlin’s massive trade surplus as contributing to the existing imbalances in the global exchange in goods and services, and not in the favor of the US.

Although Chancellor Merkel somewhat agreed this is true, she said a change in the existing trade patterns is unlikely in the near-term, as gradual adjustments would take years.

Last year, Germany ran a trade surplus 244.9 billion euros, a slight decrease from 248.9 billion euros in 2016. This as the overall US trade deficit is currently about $566 billion.

President Trump’s recent tariffs on steel and aluminum imports have sparked some concern in the Eurozone, which sends some of its metal exports to the US. However, whilst some EU policymakers have urged reciprocal measures, others – likely, including Chancellor Merkel, expressed commitment to encouraging domestic consumption to address the trade imbalances.

“(America’s) protectionist measures against German or European firms… would endanger the prosperity and employment of the export-reliant Germany,” Thiess Petersen of Bertelsmann Foundation said.

According to Chancellor Merkel’s plan, solid domestic consumption could reduce Germany’s exposure to international markets, and possibly ease the impact of the next global economic crisis.

Meanwhile, German Economy Minister Peter Altmaier is visiting Washington on March 18, seeking an exemption from President Trump’s metals tariffs for Berlin. The Trump administration had previously said such carve-outs would be available to US allies.

Following the meeting, European media reported the Trump administration could grant tariff exemptions to nations willing to back the US in its standoff with mainland China – including in overall trade and intellectual property disputes.

There is, however, little clarity how such carve-outs would work, and whether they would require special trade agreements. This as the US is reportedly weighing additional restrictions on its trade in order to curb what it sees as malicious trade practices of international “bad actors.”

“We are ready to act swiftly and appropriately if our exports are harmed by US protectionism,” office of the European Commission’s President Jean-Claude Juncker said in a statement.

But Chancellor Merkel’s most recent statements suggest Europe’s largest nations are willing to negotiate a mutually satisfying solution to their existing trade disagreements with the US.