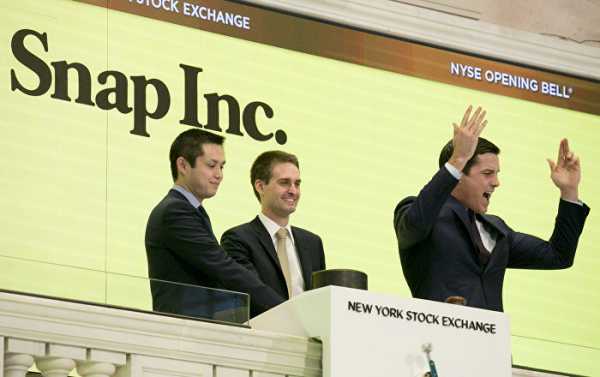 Is the point of running a large US company simply to cash in and get out?

The nature of what defines a successful business in the US was again evidenced by a record-breaking windfall received by the CEO of a popular social media platform, even as the company’s bottom line flushes itself down the toilet.

Snapchat CEO Evan Spiegel, although on the books earning a symbolic $1 dollar annual salary, will quietly acquire company stock currently worth some $636 million, even as the company hemorrhages cash to the tune of an estimated minimum $720 million in 2017.

As a result of an enormous compensation package guaranteed to Spiegel — whether Snapchat becomes profitable or augurs into a cyberhell occupied by Netscape, Myspace and Friendster — the company co-founder comes out ahead. Way ahead.

A Thursday filing by the Securities and Exchange Commission (SEC) detailed that after Snapchat went public last year, Spiegel received an enormous — that’s hundreds-of-millions-of-dollars-enormous — stock compensation package, the third-largest annual payout in history and the largest in the last nine years, according to Reuters.

The figures are far beyond that of even the CEO for the world’s most profitable company, Apple, Inc. Apple CEO Tim Cook, earned an estimated $12.8 million in combined stock compensations and salary for 2017, cited by Thewrap.com.

But while the tech-bro boss joins the ranks of the cloud people, his company revealed budget bruises at the hands of its executives and an ever-fickle market, losing well over $700 million in value in 2017.

In America that’s considered ‘failing up.”

Google Sued in UK for Up to $4.4 Billion Over Clandestine...