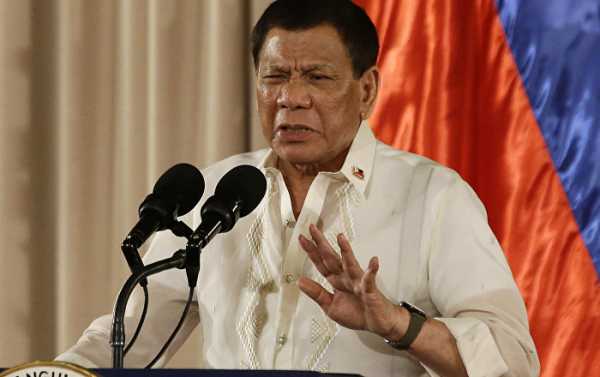 The Filipino government has initiated discussions with a Chinese state-owned company to reach a joint agreement to conduct oil exploration and pumping in the disputed South China Sea.

According to the Philippines’ President, Rodrigo Duterte, the proposal under discussion amounts to “co-ownership” of certain disputed areas, Channel News Asia reported Thursday.

Such mutually beneficial arrangements are better than the potential alternative scenario: the People’s Liberation Army carrying out a “massacre” of Filipino troops, Duterte said.

“Now their [Beijing’s] offer is joint exploration, which is like co-ownership. It’s like the two of us would be the owners. I think that’s better than fighting,” Duterte was quoted as saying while on a visit to Marawi on Wednesday.

Duterte’s spokesman, Harry Roque, gave some clarity Thursday about what Duterte meant by dealing with China. “We might enter into an agreement with a Chinese-owned corporation,” Roque said, stressing, “not the Chinese state itself.”

The name of the Chinese company has not been publicly revealed.

The details, such as which areas would fall under the agreement, when the deal might take effect and what amount of revenue might come out of the deal similarly remain unclear. Importantly, Roque noted the agreement is “likely to happen.”

In January, Manila and Beijing agreed to form a panel that would discuss an agreement to work in concert on extracting oil reserves while sidestepping the issue of sovereignty. The joint agreement can be complex since it can be viewed as endorsing one or the other country’s territorial claims.

For this reason, “we are not entering a sovereign agreement for exploration,” Roque said. “It will be an agreement, if we do it, between two corporate entities.”

If armed conflict were to break out in the South China Sea, the roughly $5 trillion worth of cargo passing through the strategic waterway would face significant risk of disruption.

Democrats want to look into Trump’s payouts to Stormy Daniels and...