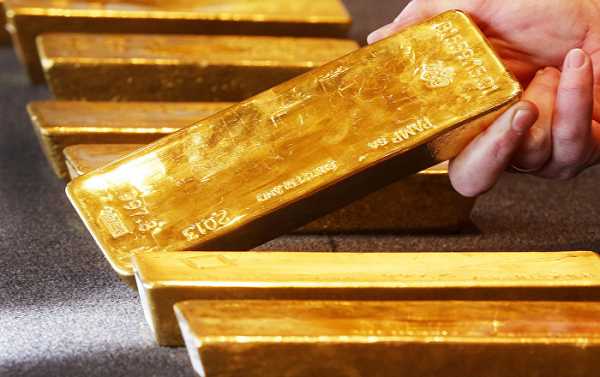 After the German central bank withdrew half of its gold reserve from abroad under growing public pressure last year, it decided to let regular citizens have a sneak peek, putting several bars of its 117-billion-euro stash of the precious metal on display.

Eight golden bars, 12 kilos each, from the German golden reserve, have become an attraction at a special exhibition entitled “Gold. Treasures at the Deutsche Bundesbank” in the Money Museum in Frankfurt on Main. The unprecedented display, which is to run till September, marks a historic event for Europe’s largest economy, as it returns half of its 3,374-ton stash from vaults abroad.

“We’re doing this to show citizens that the gold bars are here, to show transparency,” Bundesbank executive board member Carl-Ludwig Thiele noted, presenting the precious showpieces.

The majority of the 1,710 tons of gold is kept in an extremely protected vault of the Bundesbank in Frankfurt, which is a completely new situation for Germany. Until last year, nearly none of the German reserve, worth 117 billion euros, could be found in Germany due to several historic reasons. The gold was kept in the central bank treasuries of New York, London and Paris.

But last year the repatriation with top-secret shipments from the Federal Reserve, the Bank of France and the Bank of England was over, which left the US and the UK with 1,200 and 430 tons of German gold, respectively. The Bundesbank preferred to withdraw all of its yellow metal from Paris, as both countries have the same currency, the euro, which makes the stash there hardly useful if conversions are needed, while the US dollar is a reserve currency and London is considered the world’s leading gold trading center.

Berlin announced that it was planning to store half of Germany’s 3,378 tons of gold in its own vaults in January 2013, planning to bring it to a facility in Frankfurt by 2020. But the bank sped up its schedule.

Initially Germany explained its move by the desire to make the gold more accessible so that it can be sold quickly and without delay when needed. However, later representatives of the Bundesbank declared that they did not plan to exchange any part of the gold reserves for money. The decision to repatriate its stashes can be explained through a geopolitical and economic context.

A Bundesbank executive board member, Carl-Ludwig Thiele, said, cited by the AFP, “Especially during the years of the financial and sovereign debt crisis, the Bundesbank was confronted with the desire for detailed information about the gold. It even went so far that some questioned whether the gold holdings at home and abroad were real.”

The Bundesbank has been under pressure at home. So, an activist campaign “Bring our gold back home!” was launched by eurosceptic Peter Boehringer, who became an MP in 2017 with the Alternative for Germany party. It demanded the return of the gold reserves to German soil.

“Strictly speaking, we are talking not about the repatriation,” the founder of the private “Bring Our Gold Back to Our Homeland!” initiative Peter Boehringer said in an interview with Sputnik Germany. “After all, the gold reserves of the German state have never been in Germany. That’s why we call it a campaign to bring it back home.”

Gold has remained a very popular means of savings. The global economic crisis raised the value of gold fourfold, while the overwhelming majority of central bank reserves in developed countries are invested in gold.

Germany isn’t the only one who decided to reposition its gold reserves. The Central Bank of the Republic of Turkey (CBRT) had reportedly recently transferred its gold from the US Federal Reserve System to Ankara.

In March 2018, the 220 tons of Turkish gold transferred from the US were worth $25.3 billion, according to sources.
The largest private Turkish banks also withdrew their gold reserves from abroad, responding to President Recep Tayyip Erdogan’s call “to get rid of exchange rate’s pressure and to use gold against the dollar.”