Home Business Despite Slump, Bitcoin Proving to Be New Stock Market Indicator – US... 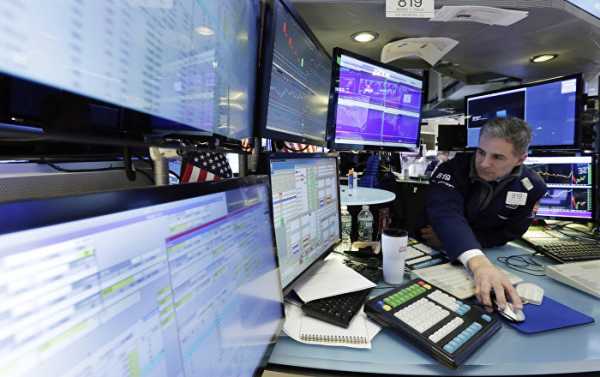 Although there was some positive news on Tuesday that the cryptomarket had been showing signs of recovery, the virtual money crunch is still there. Still, bitcoin seems to be willingly asserting a new role for itself.

The cryptocurrency scoreboard did not look that bright on Wednesday morning, with top market cap virtual currencies down between a staggering 4 to 9.5 percent. To name a few, Bitcoin was down roughly 4.5 percent hitting $7,083.09 before lunchtime on Wednesday, whereas Litecoin plunged 9.4 percent to $121.74. The second biggest virtual currency, Ethereum, devised by a Russian entrepreneur, is down 6.8 percent to $387.75.

Last month saw a major sell-off of cryptocurrencies, with the whole market decreasing by a whopping $7 billion in around half an hour, Business Insider reported, citing Mati Greenspan, one of their analysts:

“This move is actually quite correlated with the moves in US stocks.”

US stock market futures went down earlier on Wednesday, on the heels of China introducing retaliatory tariffs on American-manufactured goods.

Greenspan noted that there is essentially a link between stocks and cryptos since these are both risk assets, while cues of a looming trade war are discouraging investors, who aim to reduce their investment risk.

Jeffrey Gundlach of DoubleLine Capital told Reuters on Tuesday that bitcoin is proving to be a new stock market indicator, which is an ultimately new tendency.

Interestingly, late last year crypto-enthusiasts lauded the cryptoasset class as a hedging instrument, saying that the virtual coins have nothing to do with other markets. However, now there appears to be a link between them, which is likely a sign of the increasing development and maturity of the nascent financial sector.

Bitcoin, the largest digital currency by market cap, has seen tremendous ups and downs in the past year.  Reaching its peak in the run-up to New Year’s Day, it dramatically dipped in January and February, going down over 50 percent against the dollar.

In the last two weeks of a severe slump in the crypto market, there was a slight recovery on Monday evening and Tuesday morning, when a rise in the bitcoin price propelled other currencies up as well. Notably, on Monday, bitcoin traded at around $7,350, which is an 8 percent rally over Sunday’s lows.

After the US authorities announced in late March that they were introducing duties on a range of Chinese goods, the State Council of China responded by announcing plans to impose a 25 percent duty on 106 items imported from the US, including soybeans, cars and chemical products, according to local media. The exact time when the measure will come into effect depends on when the US introduces the duties.

‘Walking down 18 was something special’ – Shane Lowry pinching himself...