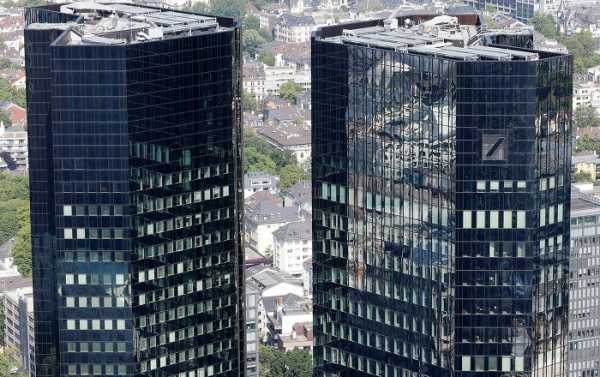 Economic experts of Deutsche Bank warn that higher inflation could trigger an across-the-board recession in the economy due to the lower investment and higher credit costs in a high-inflation environment.

Kristian Rouz – Economists at Deutsche Bank AG have warned that higher inflation could lead to a structural recession as higher price growth expectations and a central bank response in the form of a more aggressive monetary tightening might squeeze economic output in the near-to-mid-term.

Deutsche’s warning comes as the US economy is bracing for quicker inflation stemming from the buoyant economic expansion, gains in salaries and wages, full employment, as well as President Trump’s fiscal stimulus.

The bank’s experts also point out that the US is currently late in its 10-year economic cycle, market awareness of which is stirring concerns of a cyclical recession. Although the White House’s fiscal stimulus will effectively prevent such a development, inflation remains the main factor to watch in forecasting when the next economic downturn will hit the US and other advanced economies.

Deutsche also said a weaker dollar and higher oil prices are the two factors pushing US inflation up. This as the weakness of the national currency is also helping US exports and manufacturing, providing a short-term boost to the US GDP.

“If our forecast is close to the mark, the 6-month annualised growth rate for core CPI would rise further to 2.2 percent,” Deutsche’s economists wrote. “With the monthly trend expected to pick up in the coming months, the prevailing narrative from the report should be that core inflation is firming, and indeed, it is on track to near the Fed’s target this year.”

Nonetheless, inflation might be toxic in the longer run. The Federal Reserve – now lead by Chairman Jerome Powell – hinted at a more aggressive pace of interest rate hikes in order to contain the ‘upside risks’ to the economy, which include high asset valuations in the stock and real estate markets. The rate hikes also help to keep inflation at the central bank’s target of 2 percent.

But what happens if inflation starts to significantly overshoot the Fed’s 2-percent target? The Fed will respond with more aggressive monetary tightening by increasing interest rates and reducing its Treasury bonds portfolio. This will also push the neutral interest rates up along with government bond yields.

“We were probably going to get an inflation overshoot at some point, and it’s now possible it is coming sooner than expected,” Peter Hooper of Deutsche Bank said.

Subsequently, the costs of credit for the US private sector will increase, producing a slowdown in business activity. President Trump’s fiscal stimulus, however, might help support or even boost domestic investment, effectively offsetting the downside pressures of higher borrowing costs.

Yet, will the US fiscal and monetary authorities manage to strike a sustainable policy balance, allowing them to avert a recession?

“(Policymakers) are waking up to the fact that the Phillips curve is still alive,” Deutsche’s Hooper said, referring to the law of economics describing how a firmer labour market fuels inflation.

Deutsche’s analysts say the US corporate sector and Main Street economy could boost their output by taking advantage of the higher labour productivity. If the private sector manages to lower its input costs amidst the higher inflation (i.e. output costs), a recession might be averted or delayed.

However, high costs of US labour coupled with its low productivity – rooted in the rigid system of unions – might hinder the private sector’s efforts to minimise input costs.

Analysts also point out that while the Fed’s rate hikes have faltered passing on to the real economy, the hike-related increase in 2-year Treasury yield outpaced the central bank’s effort. Between September 2016 and February 2017, the Fed hiked rates 4 times, raising benchmark borrowing costs by 1 percent. Meanwhile, 2-year Treasury yield rose by 1.7 percent.

This means near-term borrowing costs are increasing rapidly, which could possibly hinder domestic investment, and slash points off US GDP growth.

Inflation might be good for economic expansion in an inflation-driven growth model, when domestic manufacturers are dominating the domestic consumer market.

However, economic growth in the US since the Great Recession was driven by the consumer demand for imported goods, financed via a massive accumulation of the governmental debt – from $10 to $20 trln over the past 8 years. Despite all the Trump administration efforts, the US economy is still the Obama-era debt-driven model, although there are signs of gradual change.

That being said, higher inflation might be toxic, unless its negative effects are effectively offset by well-coordinated macroprudential policies from the Fed and the Treasury Department. US economic authorities are facing a major challenge in their path of supply-side reforms, whilst the lingering political turmoil on Capitol Hill doesn’t make their complex task any easier.

Probe Launched After Jars of Human Tongues Discovered in US Home