Home Business EU Mulls Joining US in Trade War With China in Bid to... 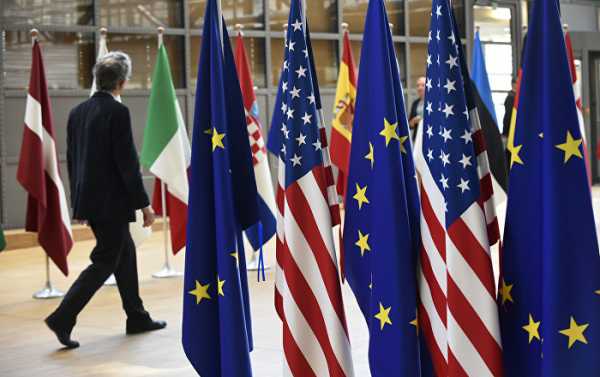 Last month, Donald Trump stepped up his protectionist policies on trade, having announced he would impose a 25 percent import tariff on steel and a 10 percent tariff on imported aluminum.

According to The Wall Street Journal, citing unnamed European officials, the European Union might have found a way to put an end to the trade war with the US and prevent the introduction of steel and aluminum tariffs due to be imposed on the 28-member bloc in  two weeks. The officials have reportedly drafted a “simplified version of the Transatlantic Trade and Investment Partnership,” which represents a “peace offer” to Washington, initiated by Germany, which is particularly afraid of an “escalating trade war” with the United States.

The EU has considered “joining forces with the US” in addressing what both sides regard as “China’s unfair trade practices,” the officials told the media outlet. The final agreement may include coordinated actions against Beijing within the framework of the World Trade Organization (WTO), as well as the European governments’ responsibility to exert more pressure on China.

The miniature deal would indulge US President Donald Trump’s main desire and fulfill his key demand – lower tariffs on American vehicles, parts and industrial machinery entering Europe, as well as some agricultural products and pharmaceuticals. Meanwhile, the EU would reportedly ask Washington to grant its companies access to US government procurement in exchange for lower barriers.

In March, Donald Trump opted for a trade offensive, having threatened to impose a 25 percent import tariff on steel and a 10 percent tariff on imported aluminum. Those tariffs are valid for all countries exporting their products to the US, however, the EU, Australia, Argentina, Brazil, Canada, Mexico and South Korea won exemptions until May 1.

Over the past few weeks trade relations between the United States and China have drastically deteriorated, with both Washington and Beijing not hesitating to turn to retaliatory measures against each other. The US President issued a memorandum introducing $60 billion in extra tariffs on China over allegations of intellectual property theft; China, in response, introduced its own tariffs on US-produced goods. Trump later added a $100 billion in tariff against China in response to what he called Beijing’s “unfair retaliation.”

Can we trust the people who got us hooked on the...