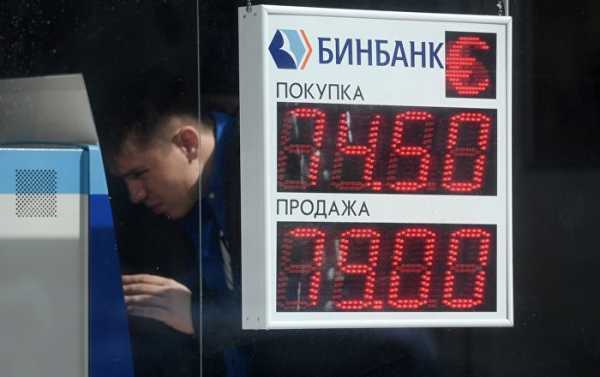 The newly-introduced US sanctions against a number of Russian individuals have hit the businessmen that fell under the restrictive measures and struck at the national currency as well.

Along with the sharp drop in prices of sanctioned companies, the Russian ruble continues to plunge for the third day in a row after stock exchanges opened worldwide on Monday, following the newly announced US sanctions against Russia.

For the last three days, the Russian national currency has lost more than 11 percent of its value against the US dollar and euro, with the ruble being traded this morning at the threshold 80 rubles to the euro and 64 to the US dollar.

The US announced new anti-Russian sanctions last Friday, adding 38 Russian individuals and entities to the sanction list. The sanctions target major Russian businessmen and companies, including Oleg Deripaska, along with Rusal and the En+ Group controlled by him, Viktor Vekselberg and Renova Group, the head of Gazprom Alexey Miller, and VTB Bank President Andrey Kostin.

Following, the announcement, the Russian Embassy in the US stated that the new package of sanctions was another hit to bilateral relations, adding that the sanctions would hurt thousands of Russian citizens who are part of the targeted businesses.

The Russian Foreign Ministry, responding to the news, noted that the sanctions and any future anti-Russia measures would not be left without a harsh response by Russia, though Kremlin spokesman Dmitry Peskov said the day before that Russia would avoid hasty decisions on the issue.