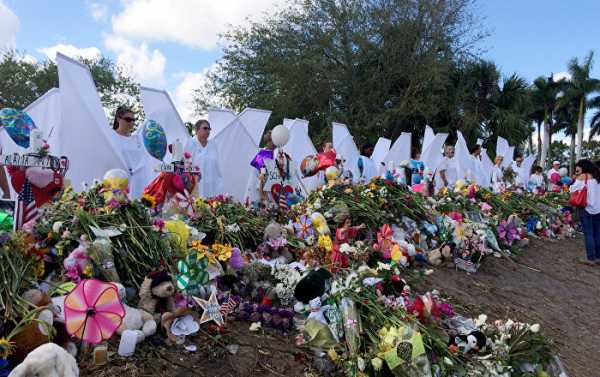 Increasing the number of mental health facilities in the US will not stop mass shootings, say experts, following calls by US President Donald Trump to open more hospitals for the mentally ill.

After last week’s mass gun murder at Marjory Stoneman Douglas High School in Parkland, Florida, in which 17 were killed and 14 injured by one teenager bearing a military-grade assault rifle, Trump and his supporters have avoided discussing much-needed gun legislation in a country where 33,000 people are shot and killed every year, suggesting instead that new hospitals be opened to care for the mentally ill.

Experts in public health and psychiatry, in response to Trump, have pointed out that first among the root causes of the epidemic of shooting deaths in the US is primarily the easy access to assault rifles — those weapons designed to efficiently kill multiple people.

The idea — often repeated by those who would continue to allow the American public to own rapid-fire lethal weapons — that adding institutions to address public mental health as a means to stop mass killings “is ridiculous, because you can’t put half the people in the country with a mental disturbance in mental hospitals,” according to Columbia University forensic psychiatrist Dr. Michael Stone, an expert with deep experience studying mass murderers, cited by Nytimes.com.

“Most of these shooters are angry, antisocial individuals you cannot spot in advance, and even if you could, you don’t have the right to institutionalize them,” Stone observed, noting that lone shooters may harbor extreme anger and be emotionally disturbed, but that very few have the sort of symptoms that would get them committed to an institution.

There are all-too many examples to prove his informed observation.

The most recent school assault-rifle shooter, 19-year-old Nikolas Cruz, was known to display evidence of mental disturbance and was notorious for threatening people both online and in regular life. Cruz, who received no professional diagnosis prior to his killing spree, was described by those who knew him as angry, potentially depressed and isolated — behavioral attributes mirrored by hundreds of thousands of US teens.

Additionally, the young man who, with the aid of his mother’s stockpile of automatic weapons, killed 26 elementary school children and their teachers in the town of Sandy Hook, Connecticut, in 2012, at one point received top-tier psychiatric attention but was not institutionalized.

The two infamous teenage Columbine High School mass murderers, Dylan Klebold and Eric Harris, were considered after their killings to be clinically depressed, particularly Klebold. His partner Harris was also thought to be psychopathic — indicating an inability to feel empathy toward others — researchers noted after the fact. But neither depression nor psychopathy would have gotten the two admitted to a hospital for the mentally ill.

Similar observations have been noted regarding the behavioral characteristics of Elliot Rodger, a young man who killed six and wounded 14 in California, and Dylann Roof, a racist murderer who shot down nine praying parishioners inside a church in Charleston, South Carolina.

Other shooters, including Virginia Tech University killer Seung-Hui Cho, who murdered 32 fellow students with an assault rifle, received psychiatric evaluations but were subsequently released after it was shown that they could care for themselves.

Stephen Paddock, 64, by any observation a ‘normal’ white male American with no history of mental health issues, used his large cache of assault rifles to kill 58 people attending an outdoor music concert in Las Vegas, Nevada.

Not one of the above-mentioned shooters had a mental health history that could have predicted a murderous rampage, indicating that adding psychiatric hospitals in the US will not stop the almost continuous mass killings.

What ties these horrific massacres together, and so many others like them, is easy retail access to military-style assault weapons — handheld armament designed to kill the maximum number of people in the minimum amount of time.

Stone noted that earlier school shootings, prior to the mid-20th century, “were mostly young kids that got into angry arguments with teachers or with another pupil, sometimes in rivalry for a girlfriend, or because they got expelled — and they killed one or two persons, never large numbers of people.”

But now there is a much more lethal canvas on which those who seek to kill can paint their own personal image of domestic terrorism — the easy-to-purchase and easy-to-shoot assault rifle.

Following last week’s high school killing, the current political climate in Washington may now be at a point where the US could join the rest of the world in common sense gun legislation.