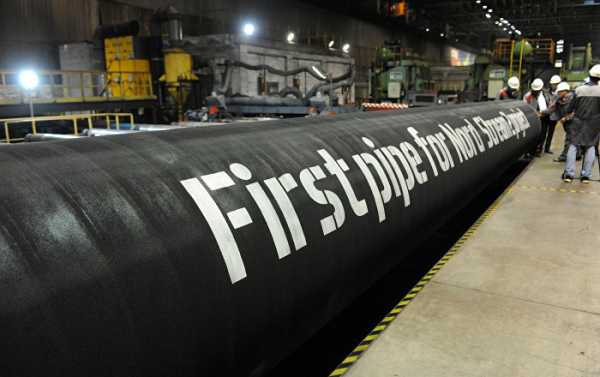 LUDWIGSHAFEN AM RHEIN (Sputnik) – Germany’s BASF chemicals company will not withdraw from the Nord Stream 2 gas pipeline project over its agreement with the LetterOne investment company to merge their oil and gas subsidiaries Wintershall and DEA, BASF CEO Kurt Bock said Tuesday.

The announcement comes after Wintershall’s statements made earlier in the day, saying that it had provided 324 million euros ($399.9 million) for Nord Stream 2.

In December, BASF and LetterOne, co-founded by Russian businessman Mikhail Fridman, signed an agreement to merge their businesses in a joint venture, which would operate under the name Wintershall DEA. The implementation of the deal is expected in the third quarter of 2018.

Bock told reporters he did not think that the merger would affect the Nord Stream 2, stressing that BASF was committed to the full implementation of the project.

The Nord Stream 2 is a joint venture of Russia’s Gazprom with France’s Engie, Austria’s OMV AG, UK-Dutch Royal Dutch Shell, and Germany’s Uniper and Wintershall, aiming to deliver 55 billion cubic meters of Russian natural gas a year to the European Union. The pipeline is expected to be launched in 2018.

The pipeline is projected to make landfall in Germany. Berlin issued a permit in January for the pipeline’s construction and operation in German waters and the landfall area in the coastal municipality of Lubmin.

How a small, Trumpy group of House Republicans wants to keep...

Kansas Policeman Gets Coffee Cup With Offensive Message at McDonald’s

Sputnik Estonia Website Operating in Emergency Mode Due to Threats –...