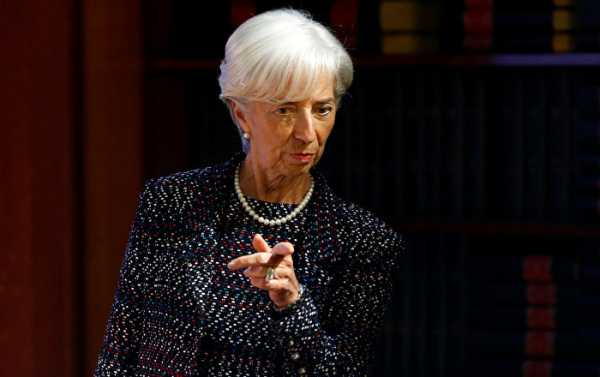 As the standoff between the US and China keeps unfolding, Christine Lagarde warned that “darker clouds are looming” over the currently bright picture and outlined the main goals for the global economy.

Managing Director of the International Monetary Fund (IMF) Christine Lagarde lashed out at protectionism, which casts a shadow over the future of global trade, stating that “restrictions hurt everyone, especially poor customers.”

“Not only do they lead to more expensive products and more limited choices, but they also prevent trade from playing its essential role in boosting productivity and spreading new technologies,” Lagarde said during her speech at the University of Hong Kong.

According to her, “the current global picture is bright,” but there are “darker clouds looming.”

Four Threats to the Global Economy

The “significantly increased” uncertainties include trade tensions, rising financial and fiscal risks, as well as more uncertain geopolitics. She warned that the world trade system of “rules and shared responsibility is now in danger of being torn apart.”

“This would be an inexcusable, collective policy failure,” emphasized Lagarde in her speech ahead of the annual spring meetings of country leaders and top bankers of the IMF’s 189 members, which is to take place in Washington next week.

US-China tensions are expected to dominate the agenda of the summit according to the Guardian.

In March, the United States imposed new tariffs on steel and aluminum imports that targeted China, among other countries. Beijing retaliated in April by introducing duties on certain US imports.

Although she didn’t call name names, Lagarde warned against exchanges of threats, which can only make the situation worse.

“There are threats, there are counter-threats, there is an attempt to open a dialogue — we should support that dialogue attempt as much as we can. The impact of those threats is minimal on both sides. What is not minimal is the way in which confidence can be undermined,” she emphasized.

Lagarde also gave her view on the best ways to deal with the imbalance, saying “Unfair trade practices have little impact on a country’s overall trade deficit with the rest of the world. That imbalance is driven by the fact that a country spends above its income.”

So she advised the US to narrow its fiscal deficit and suggested that Germany could contribute by spending more. As for large emerging markets such as China and India, she pointed out that “Strengthening financial stability by increasing buffers in the corporate and banking sectors is key.”
The IMF earlier expressed strong concerns over Donald Trump’s tariff restrictions.

“The import restrictions announced by the US President are likely to cause damage not only outside the US, but also to the US economy itself, including to its manufacturing and construction sectors, which are major users of aluminum and steel,” the statement of the organization read.

Meanwhile, earlier Christine Lagarde expressed doubt regarding whether US President-elect Donald Trump has a clear plan of the economic policies he is going to pursue.