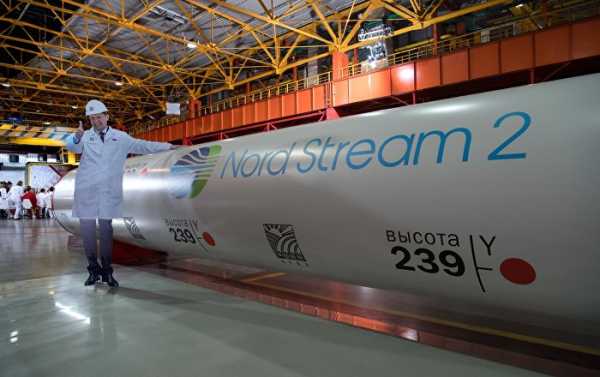 Fred Hutchinson, president and CEO of LNG Allies, an industry association working to expedite and maximize US exports of liquefied natural gas, believes that Nord Stream 2 will increase the competitiveness of the European energy market.

“I don’t think the current US administration is ready to use the authority the Congress gave them to impose sanctions on this particular project. But there is a near-unanimous political opinion that interference in the US elections is such a serious matter. If one more episode came to light, it would not surprise me to see the US Congress revisit this issue and not give the President the option,” Fred Hutchinson said in an interview with the EuroActive news portal.

He added that LNG Allies are not against Nord Stream 2 and will never be.

“My personal view is that it makes sense to do everything to increase the competitiveness of the market across the European continent: finish building the infrastructure, diversify sources, diversify the types of energy use, and use energy more efficiently and wisely. Nord Stream 2 has to be viewed against those criteria,” Hutchinson continued.

Earlier, Bloomberg quoted Sandra Oudkirk, US deputy assistant secretary of state for energy diplomacy, as saying that  the Nord Stream 2 natural gas pipeline linking Russia and Germany, could be sanctioned by Washington under a bill passed in August 2017, as it would  increase Europe’s reliance on Russia for gas supplies and could open ways for Russia to install undersea surveillance equipment in the Baltic Sea.

The project’s operator, Nord Stream 2 AG, has already obtained a license to build an underwater section of the pipe in German territorial waters and an input terminal in Germany. A similar license has been provided by Finland, where preparatory work at an undersea section of the pipeline is already underway.

The project is facing strong opposition from several countries, including Ukraine, which fears to lose the money it receives from the transit of Russian gas, and also from the US, which entertains ambitious plans to sell its own liquefied gas to Europe.

When meeting with German Chancellor Angela Merkel in April, President Donald Trump asked her to reconsider her backing for Nord Stream 2 in exchange for a new trade deal between the US and Europe, The Wall Street Journal reported on Thursday, citing German, US and EU officials.

It aims to deliver 55 billion cubic meters of Russian natural gas a year to the European Union across the Baltic Sea to Germany.

China Prepares Emergency Response Plan Amid Trade Showdown With US

“Frankie” and the Performance of Life in the Face of Death...

This is How Russia Utilizing Blockchain to Enhance Democracy