Home Business Netanyahu: No One but US Can Broker Israeli-Palestinian Peace Deal (VIDEO) 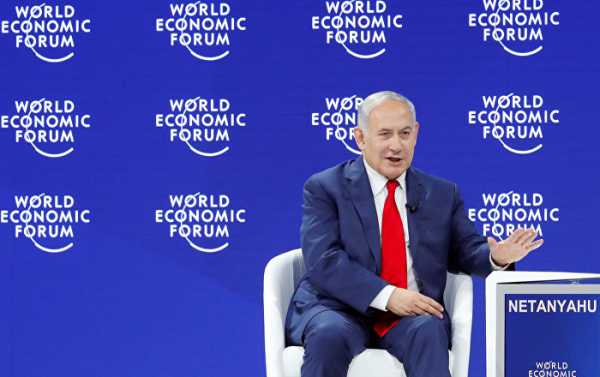 Israel’s PM Benjamin Netanyahu has addressed the participants of the 2018 World Economic Forum, touching upon the issues the Palestinian-Israeli conflict in the light of the recognition of Jerusalem as Israel’s capital and Iran nuclear deal.

Addressing the participants of the meeting on Thursday, Netanyahu said Jerusalem will be Israel’s capital “under any peace agreement.” The prime minister, however, noted that Israel would keep the status quo over the Temple Mount and holy sites under any peace arrangement.

He went on to note that the US is the only world power that could broker the peace deal between Israelis and Palestinians.

“As the honest broker, as a facilitator, there’s no other international body that would do it,” he pointed out.

Speaking about the Iranian issue, Netanyahu once again blasted the Joint Comprehensive Plan of Action (JCPOA), a deal stipulating the gradual lifting of anti-Tehran sanctions in exchange for its assurance of maintaining a peaceful nuclear program.

“The present deal is so deeply floated that it guarantees that Iran will have what it needs to make nuclear weapons. including enrichment of fissile material. This is what is problematic of the deal. It just gives them a timeline… Under the deal, they will be able to enrich uranium for a hundred or two hundred bombs… in maybe eight or 10 [years],” Netanyahu said on the sidelines of the World Economic Forum in Davos (WEF).

On January 12, Trump’s administration announced that it would waive sanctions on Iran as it was required by the Joint Comprehensive Plan of Action (JCPOA), also known as the Iran nuclear deal. However, the US leader said it would be the last time he signs the waiver unless the deal is modified. Trump also announced his intention to toughen anti-Iran sanctions over Tehran’s ballistic missiles tests.

The Israeli prime minister, a long-standing vocal opponent of the nuclear deal and the Iranian government, has repeatedly praised Trump’s efforts to challenge the JCPOA. Netanyahu believes that the nuclear deal with Iran provides opportunities for Tehran to acquire nuclear weapons.

In July 2015, the European Union, Iran and the P5+1 group of nations — the United States, Russia, China, France and the United Kingdom plus Germany — signed the JCPOA. The agreement stipulates a gradual lifting of sanctions imposed on Iran in exchange for Tehran maintaining the peaceful nature of its nuclear program. The International Atomic Energy Agency (IAEA) confirmed Tehran’s compliance with the deal in nine reports.