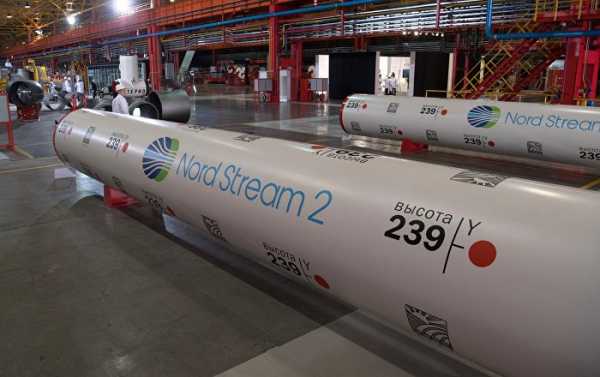 US President Donald Trump has reportedly asked German Chancellor Angela Merkel to withdraw its support for the Nord Stream 2 project and allegedly promised to negotiate a new US-EU trade deal.

CEO of the Austrian energy giant OMV Rainer Seele doesn’t see a problem with dependence on the Russian gas, as, according to him, such dependence is mutual, DPA reported. At the same time, he slammed US efforts to undermine the Nord Stream 2 project.

“The interference of the US government clearly shows me that the realization of economic interests is achieved through sanctions,” he said.

The OMV CEO expects that all the necessary approvals from the Danish, Swedish and Russian governments will be received by Gazprom by the end of the summer.

Seele also warned against seeing Nord Stream 2 as a total replacement for pipelines going through Ukraine, as according to him, these would still be used for transit.

OMV is a participant in the Nord Stream 2 project along with Russian Gazprom, French Engie, UK-Dutch Royal Dutch Shell, German Uniper and Wintershall. It is planned that the new double pipeline will deliver 55 billion cubic meters of Russian natural gas a year to EU countries.

Earlier, The Wall Street Journal reported that US President Donald Trump had asked German Chancellor Angela Merkel during their meeting in April to withdraw Germany’s support for the Nord Stream 2 in exchange for a new trade deal with Europe.

Russian President Vladimir Putin said after his negotiations with Merkel on May 18 that Nord Stream 2 is not intended to end the gas transit through Ukraine, saying that it will continue as long as it is economically viable.

#MeToo in an Age of Heterophobia

Review: Luca Guadagnino’s “Suspiria” Is the Cinematic Equivalent of a Designer...

“Designer bugs”: how the next pandemic might come from a lab