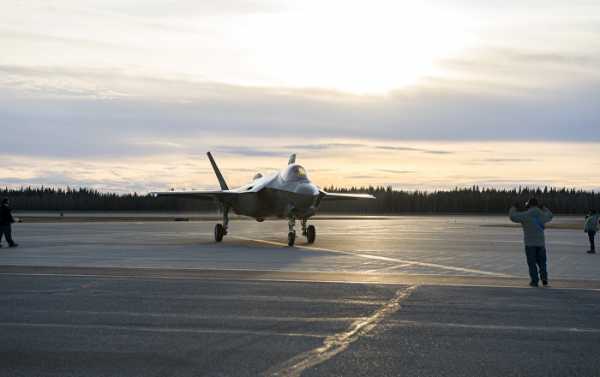 The United States Defense Department has reportedly told F-35 manufacturer Lockheed Martin its planes cannot be accepted for the time being because of a debate over who will provide a financial remedy for a “production error found last year on more than 200 of the stealthy jets,” Reuters reported Wednesday.

“The F-35 Joint Program Office has temporarily suspended accepting aircraft until we reach an agreement on a contractual issue and we expect this to be resolved soon,” a Lockheed Martin spokesperson told Reuters.

Just last fall, corroded parts that lock together the exterior shell of the plane with the airframe resulted in the Pentagon halting deliveries of the aircraft, which generate approximately $100 million in revenue per unit for Lockheed Martin. The company eventually delivered the expected number of planes by the end of 2017.

The controversy stems from “what will likely be a complex logistical fix that could require technicians to travel widely to mend aircraft based around the world,” Reuters reported, citing three people familiar with the situation.

The Pentagon has not yet provided a comment, despite attempts by multiple news outlets to obtain one.

Lockheed Martin said the company’s plants are still up and running and that they are “confident” they will still deliver 91 planes to the Defense Department in 2018, as required by the contracts for the aircraft.

At least one US Navy official has noted that Lockheed Martin has been deliberately sluggish during negotiations with the government, going so far as to obstruct the process of providing precise figures on the plane’s true cost.

“I will tell you, I am not satisfied with the collaboration and cooperation by Lockheed Martin… They could be much, much more cooperative and collaborative,” Vice Admiral Mat Winter, director of the F-35 Program Office, said in March.

“The price is coming down, but it’s not coming down fast enough,” the admiral said.

“We could seal this deal faster. We could. They chose not to and that’s a negotiating tactic… We don’t know to the level of granularity that I want to know,” which is, “what it actually costs to produce this aircraft,” he explained.

Costs for the F-35 Joint Strike Fighter program have been estimated at levels greater than $1.6 trillion over its 60-year lifecycle.

Why you’re getting so many emails about privacy policies