Home Business Poland, Ukraine Urge Biden to Do His Best ‘to Put an End’... 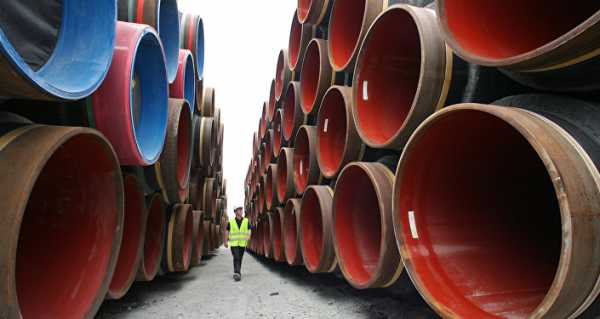 While the US claims that Nord Stream 2 will increase Europe’s dependence on Russian gas, Moscow describes the pipeline as a purely economic project, warning Washington not to politicise it.

In a Monday article for the US news outlet Politico, the foreign ministers of Poland and Ukraine urged US President Joe Biden to do his best “to put an end” to the Nord Stream 2 gas pipeline project.

Accusing Russia of strengthening “its grip on Europe’s gas supply”, Zbigniew Rau and Dmytro Kuleba noted that “Poland and Ukraine have long warned against the dangers associated with the construction of Nord Stream 2”.

“Our calls for vigilance and boldness were heard in the US Congress, which pressed on with measures designed to stop this dangerous, divisive project. We call on US President Joe Biden to use all means at his disposal to prevent the project from completion”, the pair added.

They asserted that the US continues to play “a critically important” role in the project that the ministers claimed is “not about the energy security of Germany”.

The ministers suggested that if completed, the project will add to Russia’s drive “to try to convince the Ukrainian public that the West doesn’t care about its own principles, and ultimately, about the security and prosperity of Ukraine”.

In a separate development on Monday, Nord Stream 2’s operator submitted a request to Germany’s Federal Maritime and Hydrographic Agency (BSH) for immediate entry into force of a previously issued permit to build the pipeline in German waters.

The Nord Stream 2 project envisages the construction of two gas pipelines with a total capacity of 55 billion cubic metres of gas per year from the Russian coast through the Baltic Sea to Germany.

The project is actively opposed by the US, who is promoting its liquefied natural gas (LNG) to the EU, as well as Ukraine and a number of EU countries, including Poland.

Moscow and Berlin view the US sanctions against the project as an example of unfair competition meant to boost US LNG exports to Europe. Russia has repeatedly warned against politicising what it describes as a purely economic project.

The 2018 James Beard Awards Finally Gave Women and Chefs of...