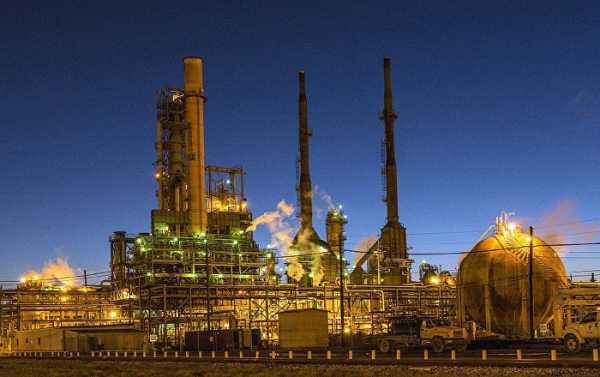 Oil prices hold above the 65 dollar mark as tensions escalated in the Middle East and the US increased its inventories and production. Radio Sputnik discussed this with James Williams, president of the London, Arkansas-based energy researcher WTRG Economics.

Sputnik: Can you comment on the recent oil fuel price fluctuations?

James Williams: The primary factor driving the volatility right now is the geopolitics. Obviously, the concern about Syria is part of it, not Syrian production, but more the participants there: Will there be a US policy against Iran that slows their exports? Essentially in Syria you have a lot of Iranian influence and it’s part of the Sunni-Shia conflicts that we’ve seen in the past and the Arab-Persian concepts that have existed for centuries.

Sputnik: So do you think we can actually expect to perhaps see some renewed sanctions against Iran?

James Williams: I think the probability increases every day. Next month if the president doesn’t renew the whole of the sanctions they will automatically go into a place and I expect that to happen.

Sputnik: How does the market react? What do you think is going to happen what’s going on with futures?

James Williams: I think that the market has most of the geopolitical risk already embedded in it. Because next month we have the risk of the Iranian sanctions, which would take some of the Iranian crude off the market. And we also have the elections in Venezuela and if Maduro is reelected I think the probability of some internal conflict or a coup goes up tremendously.

Sputnik: What are your estimates for short- and mid-term US benchmark oil prices?

James Williams: US benchmark should continue to increase roughly $4 to $5 less than Brent. They’ll move together, but rising inventories at the delivery point of Cushing is going to probably increase the spread between those two prices. But in general I think flat to higher prices capped at $80 for Brent, something close to $75 for WTI.

Sputnik: The US has been actually increasing stockpiles; they’re also upping production. How is that going to affect the market and how long will it take before the increases in production have a real effect on the price?

James Williams: US production, unlike almost all other oil-producing countries, is really not determined by the state but rather by the individual investor and they just respond to prices. And the reason for it is that mineral rights in the US are actually mostly owned by individuals rather than a country itself. It’s just a typical capitalist market here. If the price is high, more people invest and more production and we’re going to continue to increase our production as long as prices stay anywhere near what they are right now. The rate of production in the US probably will increase 1.2 to as much as 1.5 million barrels per day, every year. Nothing overnight because we don’t have any spare capacity — we have to draw more wells to get it.

James Williams: It certainly does unless OPEC and Russia, let’s just say Saudi Arabia and Russia decide not to hold to the same path that they’re holding in terms of limiting production to support prices. As it turns out right now it looks like they’re talking about being in this for the long term together. And that’s kind of interesting because I don’t expect Russia to join OPEC. Russia has been courted by OPEC since its inception in the mid-60s and Russia is not going to be an OPEC member, but I think there’s going to be an alliance and it may last longer than the end of this year or even into next year. I think we could be looking at a 5-10 year horizon of cooperation.

Sputnik: OPEC with Russia controlling their prices, their production to guide prices. How’s that going to affect prices going forward with the other scenarios that we have in place unfolding and on the background of the conflict in Syria?

James Williams: As long as they’re willing to sacrifice market share to maintain prices they can certainly support prices near the current level at least for five years — and get greater revenue because they’ll get more out of the price increase than they would out of the higher production. Eventually we’re talking about control of 40 percent of the oil market and a far greater percent of the internationally traded oil market. They can just control prices for as long as they’re willing to some market share to the US and to a less extent Canada.

Sputnik: Russia is currently in what some have called a cold war and there’s actually perhaps a growing risk of all kinds of sanctions against Russia. Are analysts already figuring in the possible effects of sanctions on oil prices?

James Williams: I don’t think that Russia, sanctions on Russia, matter all that much just for oil prices. Sanctions on China have a greater risk because it will influence more of the economy and sanctions against China if it led to an Asian recession that would put a lot of downward pressure on oil prices. The impact on Russia I think is much less.

Texas isn’t a swing state — but it matters

Chaos as hailstorm and landslide brings premature end to stage 19...

The biggest questions about the 2020 Democratic primary, answered