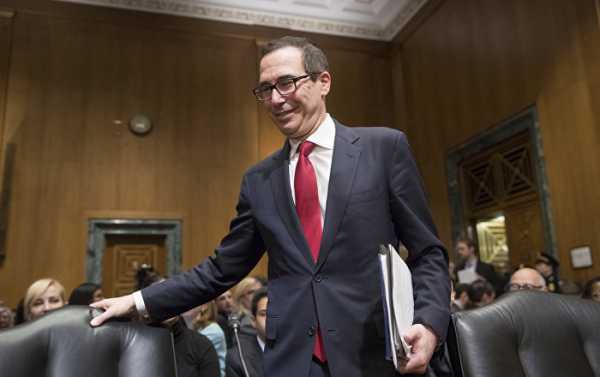 “Anton Siluanov met with US finance chief Steven Mnuchin on the sidelines of the IMF-World Bank spring meeting in Washington on April 20. During the meeting, they raised the topic of sanctions,” it said in a statement.

The US Treasury said earlier that the meeting was initiated by Russia and touched upon North Korea, Syria and Ukraine.

Earlier, the US Treasury Department added another 38 Russian entrepreneurs, senior officials and companies to its sanctions list in response to Russia’s alleged “malign activity” worldwide.

Later, US Ambassador to the United Nations Nikki Haley said US Treasury Secretary Steven Mnuchin would announce new sanctions the next day, but media reports later said Trump decided not to give his final authorization for the measures.

Recently, Anton Siluanov said that many finance ministers at the G20 meeting, including Europeans, said protectionism is inadmissible.

“The meeting was dedicated to the global economy. We condemned the restrictive measures taken against Russia and other countries,” Siluanov said.

“Many speakers, finance ministers talked about the need to stop protectionism… European ministers also spoke [with condemnation of protectionism],” he said.

Tooth-mounted trackers could be the next fitness wearables

9 experts warn that Latino dislike of Trump may not translate...