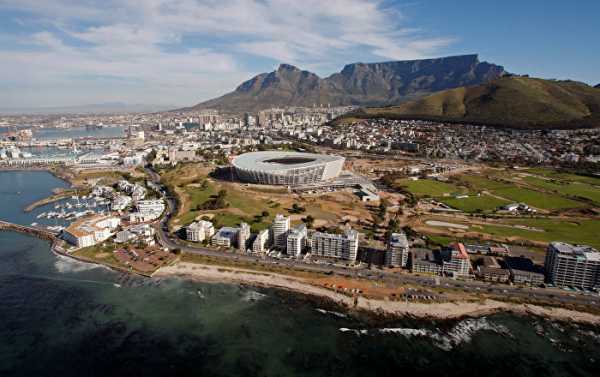 Positive changes at the highest levels of South Africa’s political governance, as well as some enthusiasm over the new president’s proposals, has prompted international rating agency Moody’s to keep the nation’s borrowing grade above “junk.”

In a statement, Moody’s said South Africa’s investment grade borrowing rating will remain intact until at least November, also revising the struggling nation’s outlook to stable from negative. The agency expects a recovery of South Africa’s institutions of state governance under new President Cyril Ramaphosa as a positive sign for economic growth.

South Africa’s new President Ramaphosa has pledged more policy predictability, somewhat reassuring investors of his country’s economic perspectives. This as the once-prosperous nation has been mired in a series of corruption scandals, poor industrial performance, and even a major water crisis – reflecting a broader decline in its productive forces characteristic of South Africa’s recent history.

The “Rainbow Nation’s” current investment grade per Moody’s is Baa3, just one notch above “junk.”

“To improve South Africa’s investment and economic prospects, the government continues to work diligently on practical steps to provide the necessary policy certainty,” the Treasury said.

However, there is some scepticism over Ramaphosa’s recent actions, as the cabinet reshuffle in still taking place within the nation’s largely one-party political system.

“This is a clear sign to Moody’s that strong steps are being taken to turn financial institutions around,” Joon Chong of Webber Wentzel’s Tax Practice said.

While Ramaphosa has demonstrated his commitment to reform, there are still massive concerns surrounding his expected policy moves.

Ramaphosa gained some notoriety since he was installed as South Africa’s new president, succeeding Zuma in the office – and even prior to that. Shortly before his appointment, he pledged to tackle the excessive influence of the powerful Gupta family in national politics – sending shockwaves across the nation’s business community.

“The recent change in political leadership appears to have halted the gradual erosion of the strength of South Africa’s institutions,” analysts Zuzana Brixiova and Marie Diron said in Moody’s statement.

However, Ramaphosa’s most odious initiative was a proposal to seize the properties of South African landowners based on race.

Ramaphosa said just 40,000 Afrikaner farmers – a claim hardly supported by any official statistics – own some 80 percent of South Africa’s land. For their part, activists from Afrikaner resistance groups say their demographic owns between 22-28 percent of agricultural lands, whilst up to 78 percent is actually owned by the government – led by the Marxist-leaning African National Congress (ANC) party.

“Land ownership is still deeply skewed along racial lines, but these figures do not illuminate the current land dispensation,” Professor Cherryl Walker said as quoted by Africa Check.

This as the rand is expected to plunge yet further against the world’s main currencies due to the declining diversification of South Africa’s economy, the increasing reliance on commodity exports, and a prospect of a broader infrastructural and agricultural decline.

The latter two are illustrated by the drinking water crisis in Cape Town and Ramaphosa’s proposals on farm reform.

S&P is expected to update its South Africa ratings on May 25.

What can the Republic of Ireland expect from Bulgaria?

The Premier League title race – what happens next?

Meat is unhealthy, meat is okay: Why science keeps overturning what...