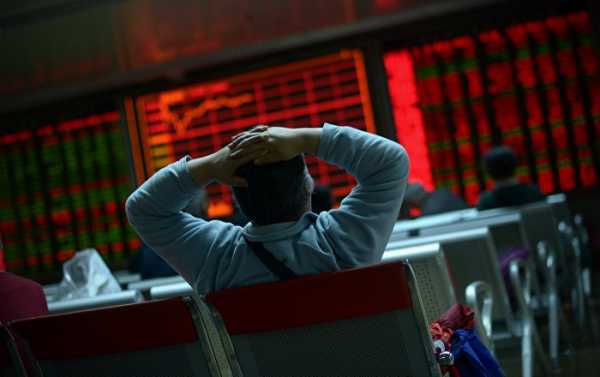 Global stock markets fell back on Thursday amid the threat of a trade war between the US and China, the world’s two biggest economies.

Stocks ended lower on Thursday around the world, with the main indices in London and Paris shedding 0.5 percent, Frankfurt closing down 0.9 percent, and the Dow Jones Industrial Average seeing a 1.4 percent loss in midday trading.

According to market analyst Jasper Lawler at London Capital Group, the looming threat of trade wars and the release of the US Federal Reserve’s decision not to change US monetary policy are among reasons for investors losing confidence and for rising bond yields.

“As equities fell out of favor, bond yields rose,” the expert said.

“The significance of the Fed statement was in the phrase where the Fed emphasized that they are not going to deviate from their gradual rate-hike path. This particular statement pushed the dollar index lower and we saw a higher move in the gold price,” said ThinkMarkets analyst Naeem Aslam, as cited by the Morning Star.

“Some major European indices hit their highest levels since February yesterday and investors are now locking in some profits,” he said in a note to clients, adding that “Traders took their cues from Asia overnight and decided to exit the equity markets, partially driven by higher yields on government bonds.”

The European Commission cautioned on Thursday in its latest economic forecast that global trade tensions with the US present an “unambiguously negative risk.”

Concerns about trade wars have resurfaced as negotiators from the US and China meet on Thursday and Friday in Beijing in the wake of US President Donald Trump’s recently introduced tariffs targeting China, which were met with retaliatory moves from the Asian country and have sent stock markets across the globe still lower.

Both sides have lowered expectations for the gathering, with Chinese Foreign Ministry spokesperson Hua Chunying telling reporters it is “not realistic to resolve all issues through only one round of negotiations”.

“When you think about the things that have been weighing on the market… I think the one that is really weighing the most heavily is trade and that’s why the market tends to swing the most violently on every new piece of news,” Michael Jones, chairman of RiverFront Investment Group, told Bloomberg TV earlier this week.

Manchester City got lucky at back with makeshift defence – Pep...

Kate Manne on why female candidates get ruled “unelectable” so quickly

Wrinkle in Time: When Christianity is Prostituted to Politics