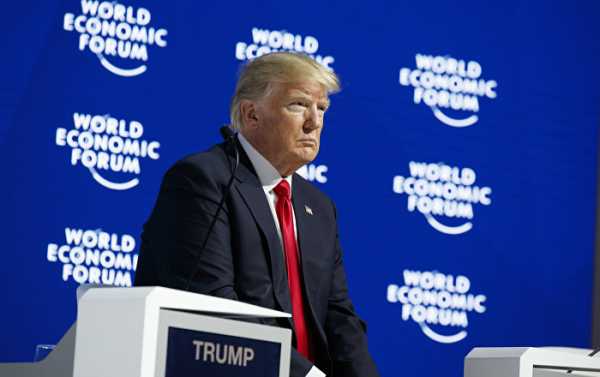 Donald Trump has criticized the EU over its trade practice, which the President sees as discriminatory against the US, and as driving the expansion of the US foreign trade deficit.

Kristian Rouz – President Donald Trump reiterated his rhetoric of reciprocity and fairness in international trade, saying he’s had “a lot of problems with European Union… from a trade standpoint.”

The President also reiterated he would stand up to the EU over its trade practices that are discriminatory toward the US. This as international currency manipulations – including the weakness of the euro – have exacerbated US trade deficit over the past two decades.

President Trump said he would pursue full enforcement of  international trade rules, and didn’t rule out the further use of customs tariffs and regulatory action against dumping practices and foreign currency manipulations. This comes after he slapped Chinese and South Korean washing machines and solar panels with a 30-percent import tax.

The President also said the existing framework of international trade hinders US exports in manufactured goods.

“We cannot get our product in. It’s very, very tough. And yet, they send their product to us – no taxes, very little taxes. It’s very unfair,” President Trump stressed.

International trade experts note the US has primarily been exporting  technology, intellectual property, and hi-tech goods over the past 15-20 years, while US exports in mass-produced goods have shrunk.

President Trump said he seeks to rearrange global trade agreements with many US trade partners.

“They’re not the only one, by the way. I could name many countries and places that do,” the President said. “But the European Union has been very, very unfair to the United States. And I think it will turn out to be very much to their detriment.”

Meanwhile, Europe is seeking to strike new free trade agreements across the globe. Last year, the EU reached a trade agreement with Canada, while a broader free trade framework that would include the EU and South America is currently in the works.

“Our aim is to conclude a very ambitious trade agreement between us and Mercosur in the coming weeks,” EU Trade Commissioner Cecilia Malmstrom said. “We aim to finalize this very soon because the clock is ticking.”

The global free trade environment has spurred currency devaluations across the globe as weakening consumer demand inspired a tougher international struggle for competitiveness. In this context, US Treasury Secretary Steven Mnuchin said he would seek a weaker dollar in the short-term in order to boost US competitiveness as well.

Overall, however, the Trump administration shares the view that the strength of the US economy will support investor demand for the dollar and dollar-denominated assets, pushing the greenback’s FX rate higher against its peers in the longer-term.

This casts doubt on the long-term sustainability of the Trump administration’s protectionist agenda.

Washington’s warning to the EU comes on the heels of the World Economic Forum in Davos, Switzerland, where global leaders discussed the path forward to overcome the challenges of sluggish growth, low productivity, and looming recessions.

The President also said his goal is to increase the volume of bilateral trade with the UK “many times” over.

“One thing that will be taking place over a number of years will be trade,” he said discussing his relationship with UK Prime Minister Theresa May.

The volume of US trade with the EU – its largest trading partner – amounts at roughly $650 billion per year. Whilst quite unhappy with the existing trade framework, the Trump administration is expected to tackle the matter cautiously, seeking to replace one-way trade with mutually-beneficial deals.

This as during a meeting with the President on the sidelines of the Davos forum, European business leaders pledged to increase investment and expand their businesses and hiring in the US in the light of President Trump’s massive economic reforms.

Five Reasons Why Trump Cracked Down on WHO, China Over COVID-19...

US Scientists Use ‘Groundbreaking’ Tech to Track Down Elusive Asteroid Trail...

Watch Temporary Hospital for COVID-19 Patients Being Constructed in Moscow