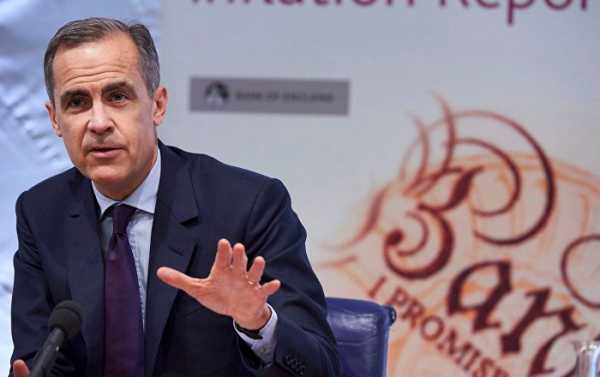 Bank of England (BOE) Governor Mark Carney upgraded his GDP growth outlook for the UK, saying the nation is bracing for an economic boost this year due to solid exports and continued strength in the financial sector.

Kristian Rouz — The British economy continues to defy pessimistic Brexit-related projections, as it posted a sustainable pace of GDP expansion in the three months up to the end of January. This comes amidst a boost in national exports, and the entailing strength in domestic manufacturing in the North of England.

The Bank of England (BOE) said the UK economy is in for a pre-Brexit boost, due to occur this year — while the nation’s separation from the EU is set for early 2019. The BOE revised its GDP forecast upward from 1.6 percent to 1.8 percent for this year, as global demand for manufactured goods is expected to push the UK’s economy up.

“British exporters are in a sweet spot, with sterling down around 16 percent overall… in anticipation of a Brexit that has not yet happened,” BOE governor Mark Carney said.

However, the dollar has devalued since then as well, while the pound’s continued weakness against other currencies has promoted a massive resurgence in its most pro-Brexit regions: the Midlands, the North and North-West, as well as in Wales.

Carney stressed that the strength of the British economy is boosting the UK’s bargaining power in the ongoing Brexit negotiations with the EU. London wants a post-Brexit trade deal to ensure the bilateral economic ties will remain uninterrupted, while the UK will also seek better trade deals elsewhere.

Brussels wants a divorce payment from the UK of as much as 60 bln euros, and has so far offered a rather limited-effect bilateral trade deal.

“This is a crucial year for the Brexit negotiations and we will all be better informed by this time next year about the future trading relationship with the EU and that will have an effect on businesses and households and the outlook for the economy, inflation and therefore the policy of the MPC,” Carney said.

Observers point out the BoE made a sudden U-turn in its rhetoric and forecasting. The regulator has been skeptical of Brexit since before the June 2016 referendum, and had even cut its rate in the vote’s aftermath to support the economy. The BoE raised its rates last year for the first time in a decade amidst the unexpected economic sustainability.

BoE economists also joined experts from other organizations — including the International Monetary Fund (IMF), the OECD, and the UK Treasury — these organizations have all previously admitted the UK’s economy has withstood the worst Brexit-related fears.

This was made possible by the boom in exports and manufacturing, while the resilience in financial services is explained by the high level of trust in the British banking system, economists point out.

“I certainly wouldn’t have thought the UK economy would be as robust as it currently seems,” Lord O’Neil, a former Tory Treasury Minister and a prominent Remainder in the past, had to admit. “That is because some parts of the country, led by the North West (of England), are actually doing way better than people seem to realize or appreciate.”

BoE Governor Carney said his optimistic growth projections are also based off the optimistic economic forecasts in other parts of the world. He stressed that the ongoing expansion in the US and Asia — with the Chinese economy having posted improvements after years of slowdown — is helping the UK to increase its own exports.

Even the critical remarks from EU officials, who said as recently as Friday that the post-Brexit bilateral trade deal ‘is not a given’, couldn’t discourage the BoE Governor.

Carney said the regulator might have to raise rates twice this year to contain inflation and prevent the broader economy from overheating. This will also help the BoE to move forward with monetary policy normalization, and enable the cabinet of Prime Minister Theresa May to undertake certain structural reforms as well.