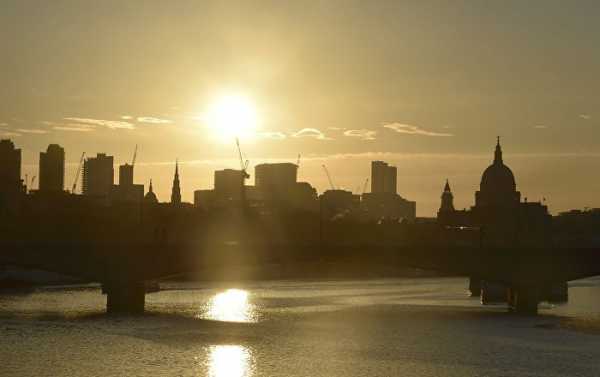 The ongoing decline in migration from the EU into the UK is poised to boost British labor productivity, wages, and overall economic performance, whilst also allowing the government to cut its welfare spending.

Kristian Rouz — The UK’s independent fiscal watchdog says the lower expected rates of migration from EU member states into Great Britain are set to boost economic growth and save the government tens of millions of pounds on social welfare programs.

This comes amidst the heated debate over the effects of Brexit on the British labor market, wages, and inflation, as well as fiscal policies.

Robert Chote, chairman of the Office for Budget Responsibility (OBR), said a decline in net immigration rates would enhance labor productivity, as British private sector enterprises will have to implement cuts to inefficient spending when facing labor shortages.

Chote made his remarks during a meeting with a Treasury select committee.

Higher labor productivity, Chote added, would boost the UK’s economic growth, whilst a contraction in the pool of available workforce would force employers to increase wages. This comes as UK wage inflation hit 2.8 percent last month, following a decline in EU immigration to its five-year low in 2017.

The OBR chairman also said a decline in the number of immigrants eligible for social benefits could improve public finances.

Answering the committee’s question of whether a “more restrictive migration regime being applied to EU migrants could ever be positive for public finances,” Chote said “that could have longer-lasting positive effects.”

Additionally, Chote pointed out the post-Brexit UK will be able to implement labor reforms aimed at boosting productivity, previously prohibited under the common EU framework of labor law.

This comes as some members of Parliament (MP’s) are calling for deregulation, lowering the bar of social guarantees and benefits for private-sector employees. Such measures, they argue, could improve the market competitiveness of the entire economy.

“In other words, we could deregulate, and become more competitive and faster trend growth rather than disappearing into the economic slow lane with the rest of the European Union?” said Dover MP Charlie Elphicke of the Conservative Party.

According to the OBR projections, the UK’s economic growth will accelerate to 1.5 percent this year, compared to its previous estimate of 1.4 percent. This is not least due to a decrease in net immigration, which has produced an uptick in wages, enhancing consumer sentiment, and driving up household consumption.

Higher labor costs of would also “encourage firms to innovate in ways that could increase their underlying productivity,” Chote argued.

His comments come in stark contrast to the OBR’s previous projections. The watchdog said in the past that a decline in EU immigration would subtract some £6 billion from budget revenues. This as lower numbers of working immigrants would mean a lower number of taxpayers.

However, more recent estimates have revealed lower number of immigrants would also mean a lower number of social benefit recipients — which happen to outnumber those who have contributed to the British budget.

“It is now clear that the OBR estimate of the fiscal effect of restricting migration may well have been seriously exaggerated,” Lord Green of Deddington said. “They seem not to have considered which migrants would be involved.”

According to Migration Watch UK, the contributions to the UK’s budget from low-skilled and/or low-paid immigrants are lower than those of the general British public, as many low-skilled arrivals happen to be dependent of this or another form of governmental accommodation.

“Statistics published by HMRC (Her Majesty’s Revenue and Customs) show that such migrants pay only about half the income tax and national insurance of the average UK taxpayer,” Migration Watch UK said. “Even if these new migrants on average made the same contribution as the native population it is most unlikely to be true for migrants on arrival.”

At the same time, several British agencies have encouraged Her Majesty’s Cabinet to encourage highly-skilled immigration. Meanwhile, Prime Minister Theresa May has considered allowing EU migrants to stay in the UK in order not to jeopardize the status of UK citizens in the EU.

Trump’s nonsense comments about Chicago and stop and frisk