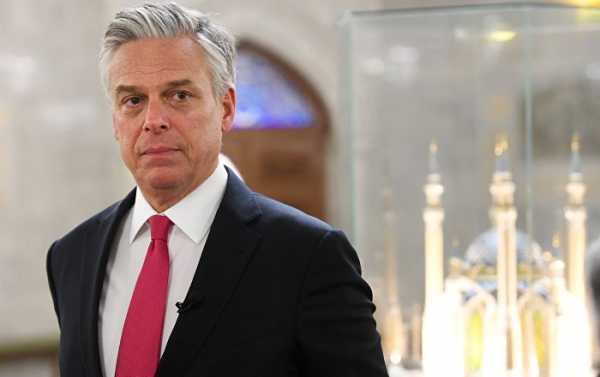 KAZAN (Sputnik) – The US companies, operating in Russia, are planning to continue their work in the country and even to expand their businesses despite the anti-Moscow sanctions, US Ambassador to Russia Jon Huntsman said Tuesday.

At the meeting with students and teachers in Russia’s Kazan, Huntsman explained that the representatives of the US firms shared their plans for continuing to work at the Russian market during a dinner hosted by the ambassador.

“The sanctions provide from events that transpired a year and a half ago, based on the legislation that was signed in my country in early August of last year, and we still feeling the effects of some of that. Meanwhile, you have many American businesses that are doing well in the marketplace, they are succeeding… I had dinner last night with many leaders from very prominent American businesses who have plans to grow here in Russia and whose businesses are quite successful,” Huntsman said.

The diplomat added that there were many areas in which cooperation between the two countries continued, noting that problems in the bilateral relations between Moscow and Washington would always exist, but it was necessary to resolve them gradually.

“The sanctions are there for underlying political reasons and challenges that we have in our relationships… and as soon as those underlying issues are addressed, then I think we will see more progress. That is why I am somewhat optimistic about 2018, because I think 2018 could be a year where we end the year on a higher note… than we were beginning the year… and I think that it is possible, I really do,” the ambassador said answering the question about when the anti-Russia sanctions would be lifted.

The US Congress passed CAATSA in response to allegations that Russia sought to influence the 2016 US presidential election. Moscow has repeatedly denied the allegations calling them groundless and against the conduct and principles of Russian foreign policy.

Moscow has repeatedly denied interference in the US election as groundless.

White House Ready to Restore Partial Funding of WHO – Report