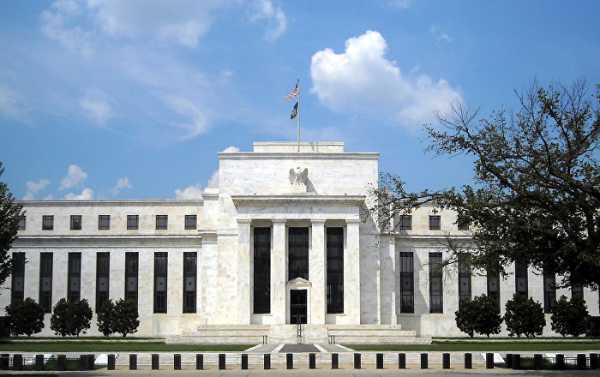 The House passed HR 4790 amid a rare bipartisan consensus, aimed at simplifying and streamlining banking sector oversight and the enforcement of the controversial Volcker Rule, which prevents banks from using customer money for trading and other risky operations.

Kristian Rouz — The US House of Representatives has moved to simplify the regulations dealing with financial sector speculations, naming the central bank as the primary body responsible for the streamlined oversight and enforcement of the so-called ‘Volcker Rule’.

The lawmakers passed the new legislation by a 300-104 vote Friday, seeking to simplify banking sector regulations, which are currently managed by five separate agencies.

“If we’re going to have a Volcker Rule, one of the most complicated, complex rules ever designed by the mind of man, why don’t we have one agency to enforce it?” House Financial Services Committee Chairman Jeb Hensarling (R-TX) said.

The move is seen as part of the Trump administration’s efforts to ease Obama-era regulations, promoting more robust bank lending and financial sector operations under the oversight of one agency, which is seen as more efficient and flexible.

“Regardless of how you stand on a particular rule or regulation, it at least ought to be clear, and there ought to be one interpretation and one enforcer of the rule,” Rep. Hensarling said.

The Volcker Rule — named after former Fed Chair Paul Volcker — is part of the controversial Dodd-Frank Act passed back in 2010, which sought to increase government control over open market operations.

Bill HR 4790 authorises the Federal Reserve as the sole administrator of the Volcker Rule; it was proposed by Rep. French Hill (R-AR), and received the support of 78 Democratic representatives, who joined the GOP majority to pass the measure.

The bill’s passage amid wide bipartisan support came about as a surprise despite the Democrats vocally opposing the Trump Administration’s urge to remove or modify the emergency regulations enforced in the aftermath of the Great Recession. This might suggest a broader reform of financial sector oversight might have solid chances at passing soon as well.

Meanwhile, Rep. Hensarling is known for his proposal to evoke and replace the entire Dodd-Frank with his own CHOICE Act, aimed at increasing financial sector resilience by making commercial banks responsible for their own sustainability and capitalisation. The CHOICE Act would also rule out the unpopular government bailouts of the so-called ‘too-big-to-fail’ (TBTF) banks.

Obama-era bailouts were seen as reflecting the alleged cronyism and collusion between the White House and top Wall Street banks, and many Republican lawmakers have long sought to prohibit the use of taxpayer money as a ‘safety net’ for TBTF banks.

Quite ironically, Wall Street has called for a softening of the Volcker Rule for years, as many bankers feel the costs of compliance with the regulation are too high. This, despite the fact that Dodd-Frank would ultimately bail them out in the event of an emergency.

However, almost a decade after the crisis, banks are now seeking risky and more profitable investments, while Wall Street does not believe a massive financial meltdown is a possibility in the current economic climate.

The Volcker Rule prevents banks from using customer money for risky financial sector operations, and is similar in spirit to the rules imposed by the Franklin D. Roosevelt administration back in the mid-1930s. However, the rule is deemed by bankers as redundant, as they are eyeing greater profits in the soaring stock market amid President Trump’s overhaul of the entire US economy.

Additionally, critics of the Volcker Rule say its has encouraged more conservative bank money management strategies, resulting in a contraction of liquidity available to investment in financial assets and to broader financial markets.

HR 4790 is now going to the Senate, where it might get additional deregulation measures attached to it, depending on the bipartisan consensus the narrow GOP Senate majority will be able to secure with its Democratic colleagues.

Meanwhile, Fed Vice-Chairman Randy Quarles — who is in charge of Wall Street oversight — said the central bank is bracing for a substantial overhaul of financial sector regulation, aimed at promoting quicker business and economic activity.

Additionally, Treasury Secretary Steven Mnuchin said his department seeks to completely exempt small banks from the regulations in order to boost their lending and trading, while tightening the control and oversight over the systemically important TBTF banks.

China ‘Not the Only Place to be Blamed’ if Wuhan Facility...

FDA puts restrictions on birth control implant but no recall