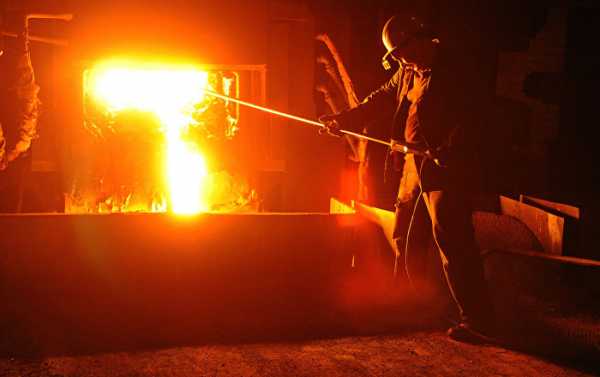 As President Trump weighs options to impose quotas or tariffs against steel and aluminium imports, experts point to the international consequences of any of his possible decisions on the matter.

Kristian Rouz — The Commerce Department is laying out a plan to slap restrictions on industrial metals — including steel and aluminium — imported from other countries. If enacted, such measures could put downward pressure on global industrial metals prices, whilst lifting costs in the domestic US market.

The measures proposed by the Commerce Department are aimed at protecting domestic US production, and are seen as lifting US factory input and output costs, and as driving the inflation above its 2-percent target set by the Federal Reserve.

The Trump administration has weighed imposing tougher trade restrictions on industrial metals imports in order to curb what the White House sees as malicious dumping practices against domestic manufacturers. The measures recommended by the Commerce Department could include either import quotas or tariffs, or a combination of both.

According to several separate reports released Friday, there are various options currently under consideration, with an ultimate goal of staving off the practices that “threaten to impair our national security”, as commerce secretary Wilbur Ross puts it.

Concerning steel imports, the Commerce Department suggested either imposing an international tariff of at least 24 percent on all imports of steel, or a 50-percent tariff against the list of 12 countries, which includes Mainland China, Vietnam, and South Africa.

A separate proposal would introduce quotas on all steel imports from overseas at a level of 63-percent of all their exports to the US in 2017.

“The president has the discretion to modify any of these or to come with something totally different,” Secretary Ross said.

As for aluminium, the Commerce Department called for either a global 7.7-percent tariff, or a 23.6-percent tariff against a handful of foreign countries — including Mainland China, Russia, and Vietnam.

These tariffs would also come with quotas as high as 100 percent of all other countries’ exports to the US in the year of 2017. A separate option would impose a quota of 86.7 percent of 2017 exports of all countries that sell aluminium to the US.

These proposals would inevitably lower industrial metals prices for other advanced economies — including the Eurozone, the UK, and Canada. At the same time, an expected drop in prices could exacerbate fiscal turmoil in Brazil, and affect countries such as Australia and South Africa — which are heavily reliant on the exports of either bauxites, iron ore or both.

The prices on these commodities would go down as well, possibly repeating their 2013 plunge.

The Commerce Department’s recommendations come after an investigation lasting several months into the alleged malicious foreign trade practices, authorised by President Trump in accordance with the 1962 law that hasn’t been used since 2001.

The President seeks to reverse the globalist approach to foreign trade of the past two administrations in an effort to protect the industries of the so-called ‘Rust Belt’, and reinvigorate the struggling economies of his core electoral base in the states of Pennsylvania, Michigan, Wisconsin, and Ohio.

The White House is now set to examine the possible negative effects of each of the proposals in order to determine the most beneficial for both the US and its trading partners.

Some say the quotas and tariffs might eventually target only several countries, and not all on the lists would be affected, as US steel and aluminium production standards vary slightly from those in each of the aforementioned countries.

Trade restrictions might reportedly affect only those countries involved in intentionally dumping their products against the interests of American manufacturers and US national security. Tariffs and quotas also must not hurt the strategically-important US industries, such as aerospace, and the White House might consider cutting its imports from certain countries, whilst promoting imports from others.

This is particularly relevant in the light of last year’s scandal related to the sub-par quality standards of the Japanese manufacturer Kobe steel, which supplied US aircraft-makers.

“We have got to get organized and do something”: a West...