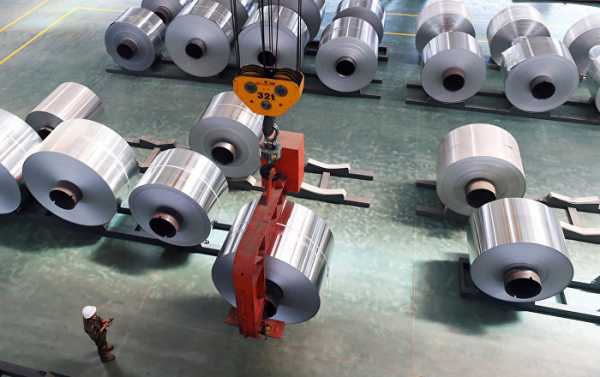 BEIJING (Sputnik) – China’s Commerce Ministry is calling on the United States to take into account Beijing’s concerns which were triggered by Washington’s introduction of import tariffs on steel and aluminum and settle the disagreement as soon as possible, the ministry said on Friday.

“China is urging the United States to settle the concerns of Beijing as soon as possible, resolve the dispute via dialogue and negotiations, and avoid damage to US-Chinese cooperation on the whole,” the statement read.

The ministry expressed hope that both sides would find a compromise and focus on the cooperation in the economy and trade.

According to the Chinese Commerce Ministry, the United States’ decision to introduce restrictive trade measures against China is a “wicked precedent” which contradicts the interests of both sides and presents a clear example of unilateral protectionism.

“The US actions correspond to neither Chinese nor to US interests, nor the interests of the world, and are a wicked precedent. Anyway, the Chinese side will not simply watch how its legitimate interests are being harmed and we are fully prepared to defend our interests,” the statement read.

The Commerce Ministry and Foreign Ministry stressed that China did not want a trade war with the United States, and hoped that Washington would review its decision.

“China has repeatedly said that it did not want to take part in trade wars, but it is also not afraid of them. We have enough confidence and options to respond to any challenge. We hope that the United States will take a balanced decision, which will not put bilateral trade relations in a dangerous position,” Chinese Foreign Ministry Spokeswoman Hua Chunying said at a briefing.

Earlier, US President Donald Trump supported an order that opens the door to new tariffs against Chinese imports which was backed by some domestic companies but has sent the US stock market plunging, increasing concerns about a trade war, and receiving a swift response from Beijing.

The day before, Trump signed a presidential memorandum that moves forward on some actions in response to China’s unfair trade practices, including the threat of tariffs, a dispute against Chinese technology licensing with the World Trade Organization, and possible investment restrictions.

Following Trump’s decision, the Chinese embassy said that China was disappointed by the US decision to introduce tariffs on its imports, and urged Washington to reconsider the move. “We urge the US to cease and desist, make cautious decisions, and avoid placing China-US trade relations in danger,” the embassy said.

Later, China’s Commerce Ministry unveiled a list of 128 imported US goods, including American pork, fruits and wine, subject to higher duties, in a bid to offset the new US tariffs.

Prostitutes in New Zealand Might Be Last Group to Start Work...

From ‘I Don’t Really Care’ Jacket to Pink Pussy-Bow: Are Melania’s...