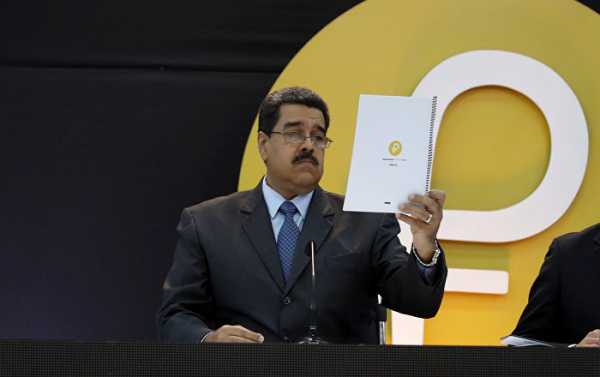 “I don’t want to get ahead of things, but we have prepared a surprise, a gold-backed ‘petro,’ which will have the same parameters as the oil-backed ‘petro.’ This topic will be raised next week,” he said.

On Tuesday, Venezuela launched the presale of cryptocurrency tokens supported each by a barrel of Venezuelan oil. Maduro has estimated early gains at $735 million.

The cash-strapped nation has been struggling with political and economic fallout of a global slump in oil prices and US sanctions after Washington blocked its investors from buying Venezuelan debt.

In December, Maduro announced the idea to create a cryptocurrency, backed by the country’s oil reserves to “to advance the country’s monetary sovereignty.” The country has allocated five billion barrels of oil for the cryptocurrency, with reported plans to to set the initial price at $60 per one unit of the currency.

Venezuela’s President said earlier that urged members of the regional Bolivarian Alliance for the Peoples of Our America-Peoples Trade Treaty to join him in overcoming the “financial blockade” imposed by the US.

“The president’s going to continue to fight back”: White House defends...

Prince Harry and Meghan Markle Were Made Aware They’re Not ‘Really...