Home Business Why Countries Pull Out Their Bullion From the US 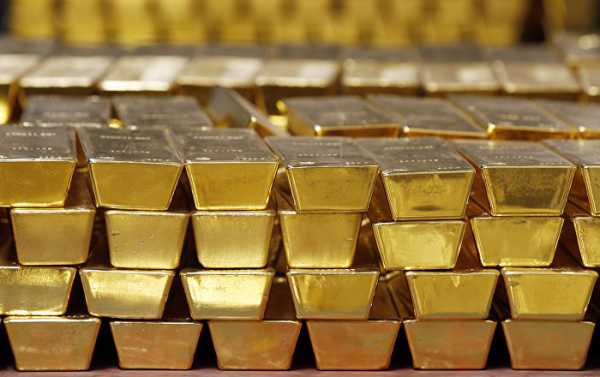 With the Turkish Central Bank withdrawing its gold reserves from the US Federal Reserve System and shipping them to Ankara, Sputnik looks into how this move may affect the development of the world economy.

All Conditions for Crisis in Place

The global economy is struggling to cope with a barrage of hard conditions such as uncontrolled money printing, trade wars, sanctions, increasing interest rates and a decline in retail trade.

Additionally, geopolitical tensions show no sign of ceasing; Syria which was hit by the US, British and French missile attacks on April 14 provides a vivid example.

In order to circumvent the possibility of economic deterioration or new financial crises, several key major banks and governments are bracing themselves for economic calamity in advance by saving “real money” ahead of the crisis – Turkey provides a fresh example.

According to Keith Neumeyer, chairman of the First Mining Gold company, the main problem is that the governments print too much money that is not secured by gold — a tendency which he said is unlikely to change in the near future.

He said that gold does not care whether we enter an inflationary or de-inflationary period because investments in gold are justified under any scenario.

The continuous printing of money may endanger the stability of the global economy and add to higher gold prices, amid both monetary factors and supply-related problems.

The global investment bank and management firm Goldman Sachs has predicted that the next few years will see a decline in global gold production.

It was echoed by Goldcorp, one of the largest gold mining companies, which suggested that by 2022, gold production will fall to the level of the beginning of the 21st century.

The US Geological Survey, in turn, believes that with production rates at current levels, gold reserves in the interior of the Earth will be exhausted by 2034.

In this vein, speculation is rife that the combination of all these factors will cause the price of gold to skyrocket — up to 2,000 or even 3,000 dollars per ounce in the near future.

Right now, about 30 percent of all reserves of developed countries are stored in gold.

With 1,860 tons of gold worth 80 billion dollars, Russia has outstripped China and ranks fifth in terms of gold reserves.

Building up gold stock remains a key priority of the Russian Central Bank, which buys up almost all the gold mined in the country.  Purchasing monetary gold aims to support Russia’s gold mining industry, which produces about 300 tons of precious metal per year.

How Gold May Help

As far as the financial system’s development is concerned, there is yet no feasible alternative to gold. Traditionally, its accumulation can help a country protect itself from currency risks and possible sanctions as well as provide the opportunity to earn.

The Russian Central Bank said in this regard that an increase in the country’s international reserves added to the revaluation of operations on Russian Finance Ministry accounts and the monetization of gold.

Any currency, including the dollar and the euro, is heavily burdened with debts which may finally be written off.  In the event of the collapse of the dollar system, gold is expected to retain its value.

Neumeyer expressed confidence in this connection that a global reset will happen when the governments of the world move to get rid of their debts and tie everything to the price of gold.

That’s why countries like Russia and China are accumulating gold; they know what may occur in the next few years, according to him.

According to the World Gold Council, the Central Bank of the Republic of Turkey (CBRT) purchased 187 tons of precious metal, becoming the second largest sovereign buyer of gold in the world after Russia.

Like in other countries, part of Turkey’s gold reserves — gold bars weighing 28.7 tons – were stored in the US Federal Reserve System.

Earlier this week, it was reported that the CBRT withdrew its gold reserves from the US to place it in storage facilities in Turkey, as well as the Bank for International Settlements in Switzerland and the Central Bank of England.

Also withdrawing its gold reserves from the US were the Netherlands and Germany’s Deutsche Bundesbank which launched a program of partial repatriation of German gold that was stored in the Federal Reserve since the end of World War II in 2012.

At the end of the day, 300 tons of gold have been returned to a Bundesbank storehouse in Frankfurt am Main. As for the Netherlands, it has withdrawn about 100 tons of gold from the US Federal Reserve System.

With Russian and China agreeing to settle trade in ruble and yuan, there are signs are that the world seeks to reduce its dependence on the dollar.

In his second year, Donald Trump is building a more extreme,...