Home Business Will US Hit Nord Stream 2 Companies With Sanctions Before Christmas? 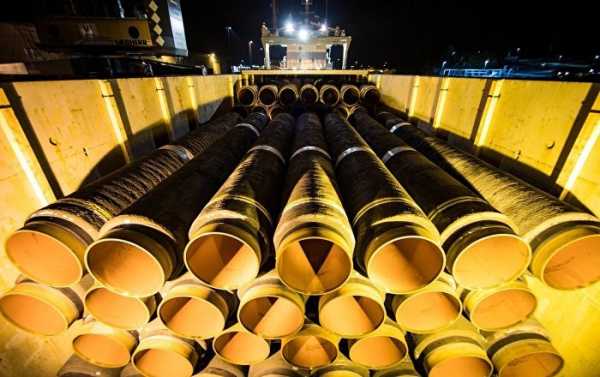 Chairman of the Senate Foreign Relations Committee Jim Risch stated earlier that the US Congress plans to block the further construction of the Russia-sponsored Nord Stream 2 natural gas pipeline by passing a defence bill and hitting the project’s European partners. According to the German outlet Bild, this could happen within a few weeks.

The US will target companies involved in the Russian-European pipeline project Nord Stream 2 with sanctions that have been included in the 2020 US military budget bill, the National Defence Authorisation Act, due to be adopted before Christmas, the German newspaper Bild reports, citing Senate circles.

The sanctions are said to mainly affect international companies, which would be blocked from doing business in the US. This would include the Swiss company “Allseas”, which sells underwater tubes and deep-sea cables worldwide, as well as German companies working with Gazprom, or companies like Uniper, which is financially involved in the project.

As the German newspaper points out, it is unusual that such sanctions are added to a military budget bill, but there is reportedly a strong reason, as the construction of the pipeline through the Baltic Sea that is to connect Russia and Germany is expected to be completed in about three months. Bild explains that there would not be enough time left for a large, far-reaching sanctions bill to affect the companies involved in the construction – which is what the Democrats have been planning.

According to the report, the sanctions would give the EU three years to set up its own protection mechanism to become less dependent on the state-run Russian company Gazprom and Russia – Washington’s key argument against the project, along with claims that the pipeline threatens US energy security.

Stepping Up Pressure on Nord Stream2

According to the outlet, the information about the punitive measures against the venture was confirmed by the chair of the Senate Foreign Relations Committee, Jim Risch, during a security forum in Halifax, Canada. Bild’s story comes hot on the heels of Risch’s announcement that the committee has added sanctions on Nord Stream 2 partners to the draft 2020 National Defence Authorisation Act. He also noted that “this window is closing”.

The senator added that the addition to the bill reflects an agreement between the US administration, the US House and Senate, and banking committees.

While Russia, as well as Germany and Austria, state that this is purely an economic project, US allies, including Poland and the Baltic States, have repeatedly raised concerns about the pipeline, which would bypass Ukraine, and urged European countries to break the deal with Moscow, citing security issues.

Emergency alerts to be sent less widely to make them useful

‘He Should Respond’: Trump Weighs in on Sexual Assault Allegations Against...

The Puerile Emptiness of “Peter Rabbit” |