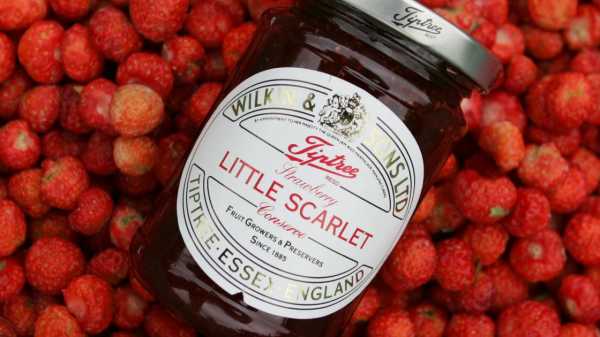 Alexandra Schwartz: All the recent homages to Philip Roth got me thinking about appetite, and not just the erotic kind. Take jam. Textual evidence suggests that Roth was a fiend for it, in particular Tiptree Little Scarlet Strawberry Preserve, made by the English concern Wilkin & Sons Ltd. In “Sabbath’s Theater,” Mickey Sabbath happens upon a jar of it at his rich friends’ fancy apartment on Seventy-fourth Street and Central Park West. It costs $8.95, quite a boodle for some mashed-up fruit. Sabbath eats it slathered on seeded pumpernickel, while contemplating sex and suicide. In his pocket is a pair of panties that he has nicked from the bureau of his friends’ nineteen-year-old daughter. He licks Little Scarlet from his fingers as he sifts through her desk drawers in search of nudie pics: talk about product placement.

Fiction isn’t real life, and Mickey Sabbath isn’t Philip Roth, but consider Exhibit B: “Asymmetry,” Lisa Halliday’s partial roman à clef based on the romance that she had with a seventysomething Roth when she was in her twenties. On page twenty-eight, Ezra Blazer, the Roth character, calls up his young lover with the following instructions: “Mary-Alice, I’m still looking forward to seeing you this evening, but would you mind first going to Zabar’s and picking up a jar of Tiptree preserves, that’s Tiptree preserves—T-I-P-T-R-E-E, preserves, as in jelly—and not just any flavor but Little Scarlet, which is the most expensive one they’ve got. It costs about a hundred dollars and that’s because they make it out of little girls like you.”

In fact, Tiptree is made not of little girls but of whole little strawberries the size of a baby doll’s mouth. A twelve-ounce jar at Zabar’s doesn’t cost a hundred dollars, merely a sufficiently insane $18.98. (This is not just the usual New York lunacy; at Walmart, it goes for $20.09.) Meanwhile, all the other Tiptree jams—apricot, ginger, orange and tangerine, damson, gooseberry, quince, morello cherry, a lovely lemon curd marmalade in a shade that Roth calls “spectral yellow”—are available in the comparably reasonable eight-to-eleven-dollar range. Clearly, Little Scarlet is the caviar of jellies, the Rolls-Royce of conserves. Those tiny strawberries are of the Fragaria virginiana variety native to the eastern United States, where they were discovered in the early twentieth century by the preserve impresario C. J. Wilkin, who spirited them back to his manufacturing base, in Tiptree, Essex. Wilkin & Sons claims to be their only commercial grower in the world. The Queen is rumored to love Little Scarlet; all the Wilkin jars bear the royal insignia. So does the discerning James Bond, who eats it for breakfast (his favorite meal) in “From Russia With Love.” (How is it possible that Bond’s favorite meal is domestic, regular breakfast? There’s a reason his tag line is “Shaken, not stirred.”) So Little Scarlet is a status symbol, literary and otherwise. But is it worth the hype? I asked Hannah Goldfield, The New Yorker’s food critic extraordinaire, to help me decide.

Hannah Goldfield: Let me start by saying that, as a card-carrying food obsessive, I am always hyper-attuned to descriptions of eating and cooking in books, and Roth, a master at describing appetites of all kinds, is a food writer of the highest order. Consider, for example, his description of Merry Levov, the young terrorist on the run, ordering diner B.L.T.s and vanilla milkshakes to resist her homesickness in “American Pastoral”: “Saying the familiar words, watching the bacon curl on the grill, watching for her toast to pop up, carefully removing the toothpicks when she was served, eating the layered sandwich between sips of the shake, concentrating on crunching the tasteless fibers from the lettuce, extracting the smoke-scented fat from the brittle bacon and the flowery juices from the soft tomato, swilling everything in with the mash of the mayonnaised toast . . . gave her the courage to go on alone.” That has to be one of the most evocative sandwiches in all of literature.

When I read “Asymmetry,” just before Roth’s death, I was struck by Halliday’s description of Little Scarlet, by the specificity of Ezra Blazer’s desire for it, by his making a point of telling Mary-Alice that it’s the most expensive kind at Zabar’s. It’s so clear what the jam represents for him, and the passage in “Sabbath’s Theater” makes it clearer still. It’s about money, and aspiration, and sex—more broadly, longing, one of Roth’s great themes. In “Asymmetry,” this longing is fulfilled. Blazer seems to have achieved the life he wants, the life of Mickey Sabbath’s rich friends on Central Park West, and his pride at this is laid bare by his request for Little Scarlet.

This transparency is almost embarrassing, and yet I found myself, like Mary-Alice, seduced by Blazer’s tastes, by the romance of a certain kind of Upper West Side life. What was this extremely fancy jam, so essential that it was the only thing on the eminent author’s grocery list? I’d known about Tiptree, but only as a maker of marmalade, particularly an orange variety called “Tawny,” which is triple-cooked so that it’s darker and more caramelized, yet less sweet, than the average kind. I had been thinking about Little Scarlet, when suddenly, a link to a Bon Appetit article about it popped up on my Twitter feed. I decided I had to have some, and found it for the (still plenty outrageous) price of $12.99 at my beloved Kalustyan’s market in Manhattan. Before I could make it there, though, an editor brought a jar into the office.

And now, for the great reveal: I don’t find the jam especially remarkable! I do appreciate the fact that it contains completely intact, tiny strawberries. They’re thrillingly miniature, cute as a button, satisfyingly delicate to crush whole between your teeth. But otherwise, it strikes me as too sweet, and quite ordinary. I ate it from a spoon. I ate it on a slice of delicious sourdough bread, made at a fancy Brooklyn bakery. I ate it on a rhubarb scone that I made myself, which was, I admit, rather tough and dry. The Little Scarlet improved it, but Smucker’s would have, too.

A.S.: I didn’t love the jam either! Maybe the anticipation was too much. I was hoping for a transcendent experience, a pectin revelation that would make me feel like smashing the five-dollar jar of mixed-berry Bonne Maman that lives in my fridge. That’s a lot to ask from a strawberry. Little Scarlet was too sweet for me. Do you think it could be an English sort of taste? Maybe I’m more of a French jam kind of girl.

H.G.: The French make incredible jam. A friend who went to Paris recently brought me a jar of orange preserves made by an Alsatian woman named Christine Ferber, who has a cult following. She’s been called the “queen of confitures.” The jam is much runnier than your standard marmalade, like thick, glossy orange juice that spreads beautifully on toast, and it costs about the same as Little Scarlet if you buy it online, and half as much if you buy it in France. On the other hand, I can’t stop thinking about a detail from the Bon Appetit article: Darren McGrady, a former chef to the British royal family, said on Twitter that the Queen enjoyed scones with Little Scarlet and clotted cream at Buckingham Palace garden parties, but only after running out of “home-made Balmoral jam.” How can we get some of that?

England in charge of their destiny, says Gareth Southgate