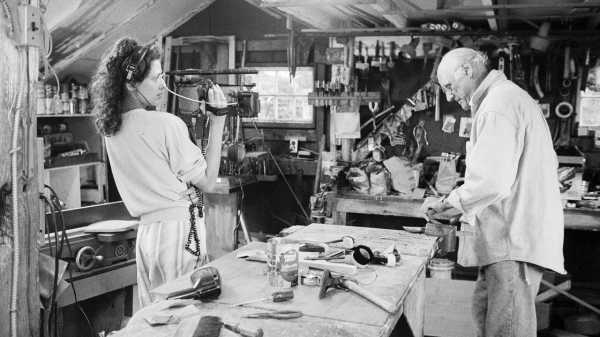 “Arthur Miller: Writer,” a new HBO documentary about the playwright’s
life and work, was produced and directed by Miller’s daughter Rebecca,
who collected footage for it for over twenty years. Often, she was able
to shoot from intimate or rarified vantages: her father carving a
freshly roasted chicken, reading the newspaper, picking up a pair of
bluejeans from the floor and putting them back on. “I felt I was the
only filmmaker that he would let close enough to really see what he was
like,” she explains, in an early voice-over. In conversation, Miller
exhibits deep intelligence and an almost preternatural grace—he
appreciates both the inanity and the magnificence of living. While
reflecting on his experiences, he will often say something casual but
unbearably profound, like “People are far more difficult to change than
I had allowed myself to believe.” (Oof.)

Rebecca, who is fifty-five, has also worked as a filmmaker, novelist,
and painter, and is married to the actor Daniel Day-Lewis. She is a
child of Miller’s third marriage, to the Austrian photographer Inge
Morath. Her father’s romantic relationships occupy a good chunk of her
movie. In 1940, Miller married Mary Slattery; in 1951, he met Marilyn
Monroe. “It wasn’t enough for me, suddenly,” Miller admits of his first
marriage. He and Monroe began exchanging letters, which were filled with
yearning. For the next five years, Miller struggled to metabolize his
guilt and anger: “I no longer knew what I wanted, certainly not the end
of my marriage, but the thought of putting Marilyn out of my life was
unbearable,” he writes in “Timebends,” his autobiography, from 1987. He
went to work each day past a life-size cutout of Monroe—the famous shot
from “The Seven Year Itch,” in which she’s laughing, her white skirt
billowing up around her.

Ultimately, Miller couldn’t live without her. His correspondence with
Monroe grew breathless, desperate: “It is just that I believe that I
should really die if I ever lost you,” he wrote. “It is as if we were
born the same morning, when no other life existed on this earth.” They
were married in 1956, but divorced by 1961. She overdosed on sleeping
pills in 1962. When Miller speaks of her, he sounds both enamored and
defeated.

Miller was radicalized in the nineteen-fifties, and, like many of his
colleagues, he was investigated by the House Un-American Activities
Committee. He was eventually found guilty of contempt of Congress, for
refusing to provide the names of people he had seen at meetings of the
Communist Party. “A kind of popular fascism was developing in the United
States,” Miller explains. The debacle fed the work (you get the sense,
with Miller, that everything eventually fed the work), and, in 1953, he
wrote “The Crucible,” a play ostensibly about the Salem witch trials.
It’s also a trenchant allegory of McCarthyism and a raw display of the
kind of swelling, blinding panic that can seize hold when people feel
truly helpless.

Miller married Inge Morath, in 1962, and they were together for the next
forty years. Miller was, perhaps, less pie-eyed about love by then. “I
miss you. I am discouraged with myself, my rootlessness. And ashamed
too,” he wrote to her. “I can’t talk to anyone but you about so many
things. I feel haunted sometimes by the question of whether anything,
any feeling, is eternal.” Miller was trying to make sense of it all on
the page. The film includes poignant and insightful interviews with the
playwright Tony Kushner—perhaps Miller’s only real peer—and the
writer and director Mike Nichols. Both speak admiringly of Miller’s
ability to sublimate his own pain into prose.

The film also bravely addresses Daniel Miller, Miller’s son with Morath,
who was born with Down’s syndrome in 1966, and institutionalized
shortly thereafter. “I found myself not doubting the doctor’s
conclusions, but feeling a welling up of love for him,” Miller wrote in
his journal, in 1968. “I dared not touch him, lest I end by taking him
home, and I wept.” Though Miller did not mention Daniel in his
autobiography, he did agree to speak to Rebecca about him—yet the
conversation never happened. “I had the opportunity to finish this film
in the nineteen-nineties, but I didn’t know how to finish the film
without talking about my brother, and I didn’t know how to do that,”
Rebecca explains in a voice-over. “I told my father this, and he offered
to do an interview about it. I put it off. I put it off for a long time.
I had children, and I started making other films, and he died.”

The film conspicuously doesn’t attend to Miller’s last girlfriend, the
painter Agnes Barley, who was thirty-four years old at time of his
death. Barley met Miller a few months after Morath died, in 2002, and moved into
his Roxbury, Connecticut, home the same year. In a gossip column, the Daily
News suggested that Rebecca and Day-Lewis were disapproving of the relationship and its
more than fifty-year age difference, and that they asked Barley to leave
Miller’s estate following his death, in 2005. The precise dynamic of
Miller and Barley’s relationship remains unclear—some sources report
they were engaged.

I met Miller once, briefly. He was eighty-seven, and had been invited to
speak to a graduate seminar I was taking at Columbia University, on
memory as a kind of literary engine. (It was taught by the wonderful poet
Honor Moore, Miller’s friend and neighbor in Roxbury.) We were seated
around a formidable wooden table—the same one where we gathered to
dissect our own stories and attempted to sniff out what we were doing
wrong, and what (if anything) we were doing right. I recall feeling
awestruck when Miller walked into the room. He had been adjacent or
pivotal to so many extraordinary moments, and “Death of a Salesman” is
as formative and essential an American text as I can think of. Though
Miller looked his age by then, he spoke about the strange and difficult
work of writing with a sharpness and acuity that I found staggering. He
seemed to have figured something out.

In 2015, the centennial of Miller’s birth, the Belgian director Ivo van
Hove staged a minimalist production of “A View from the Bridge” at the
Lyceum Theatre, on Broadway. A friend and I got tickets for opening
night. The play is set in Red Hook, Brooklyn. “This is the slum that
faces the bay on the seaward side of Brooklyn Bridge,” Miller writes.
“This is the gullet of New York swallowing the tonnage of the world.” If
you have ever spent any time there, considering Buttermilk Channel from
the cusp of Valentino Pier, you understand that Red Hook—with its vast
and desolate waterfront, overlooking the Statue of Liberty—is a place
that accommodates a certain amount of longing.

“A View from the Bridge” is a tragedy in the Greek sense. Eddie Carbone,
a married longshoreman, falls in love with his orphaned niece,
Catherine. His situation—like all furious, intractable, predatory
loves—is doomed from the outset and grows increasingly untenable, as
Eddie, who is clearly terrified, makes more strange and awful decisions.
“His value is created largely by his fidelity to the code of his
culture,” Miller wrote in 1960, in an introduction to the play.
“Invisibly, and without having to speak of it, he was getting ready to
invoke upon himself the wrath of his tribe.”

Miller is interested in implacable appetites—you can sense his own, in
his letters to Monroe—and in the ways in which we are punished for them. The
punishment part is important: “In a word, I was tired of mere sympathy
in the theater,” Miller wrote in his introduction to “A View from the
Bridge.” It would require extraordinary hubris to call Eddie “bad,” in
the judgment-day sense, but he nonetheless mismanages his lust and envy
in unforgivable ways. Whenever I caught myself feeling sympathetic
toward him, I felt enormous shame—Catherine is just seventeen, and
thinks of Eddie as a paternal figure, a trust he systematically sullies
and exploits. Nonetheless, his predicament reminds me of a line in
“Death of a Salesman”: “He’s not the finest character that ever lived,”
Linda Loman says of her husband, Willy. “But he’s a human being, and a
terrible thing is happening to him. So attention must be paid.”

Van Hove’s production culminated in a literal bloodbath: a wild and
abstract finish. Afterward, my companion and I zoomed toward
Rudy’s, an ungodly tavern on Ninth
Avenue, where patrons still receive a free hot dog with each drink. I do
not recall what we discussed, only that we chewed our hot dogs sombrely.
Miller is an expert at highlighting human frailty, both within and
outside of the family—all of the ways in which we betray and ruin each
other. His plays often feature older, failing men, who baffle and
horrify their children. This has to be one of the most excruciating
things a person can endure: your own child looking at you with
disappointment. It’s devastating to behold onstage. “The best work that
anybody ever writes is a work that is on the verge of embarrassing him,”
Miller says in the film. “Always. It’s inevitable.”

“Arthur Miller: Writer” also recounts Miller’s struggles during the
nineteen-seventies and eighties, when his work came to be considered
outmoded—Broadway was now too stuffy and irrelevant to matter to young
people. “The theatre had lost its prestige. Young folks were looking in
an entirely different direction for their ideas and feelings,” Miller
explains. He was suddenly having a difficult time ascertaining “the
point of it all.” In 1968, a Times piece about his play “The Price”
questioned whether Miller was still attuned to the concerns of the day:
“ ‘The Crucible’ is already 15 years old. To a generation that has,
therefore, no need to nod respectfully at the name of Arthur Miller, a
play about human responsibility sounds, if not downright
incomprehensible, at least old-fashioned,” the critic Joan Barthel
wrote.

Miller kept at it anyway. He wrote twenty plays between 1968 and 2004.
“I didn’t feel there was anybody out there who was interested. I felt I
was shouting into a barrel,” he says. Still—what else could he do?
Writing was his work and his purpose. In fact, the film’s title comes
from Miller’s response when asked how he might like his obituary to
read. “Writer,” he replied. “That’s all. That should say it.”

France are worthy World Cup winners after seeing off Croatia