Home Culture A Deadly Shark Attack at a Beach on Cape Cod That I... 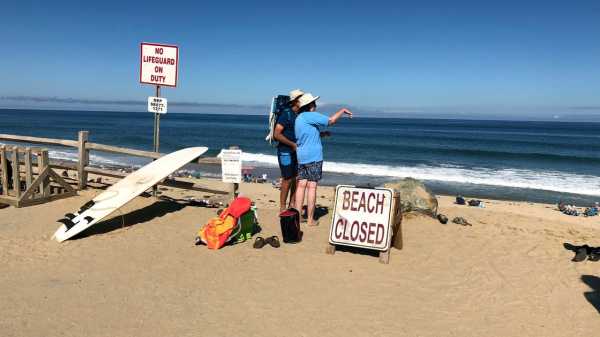 I grew up spending summers in a house that my parents built for five thousand dollars, in 1952, on a hill above Newcomb Hollow, in Wellfleet, Massachusetts, where a young man died on Saturday from a shark bite. My father used to say that there were no sharks off the Cape, because the water was too cold. He was wrong, of course. The sharks were likely always there, but in deep water, following whales. The whales would occasionally die, for whatever reason, and fishermen would sometimes see sharks feeding on their carcasses. Now, however, the sharks are close to shore, because they prey on seals, which used to be scarce and are not any longer, a result of the Marine Mammal Protection Act, passed in 1972. The act is typical of our attempts to manage nature. In my childhood, I never saw seals, and it seemed desirable to protect them from being drowned in fishermen’s nets. Now there are so many that one of my nieces described them as an infestation. This summer, I started to think of them as sea rats.

Arthur Medici, the man who died, was twenty-six. He came to America two years ago from Brazil to go to college. In photographs, he is handsome, with dark eyes and a direct gaze. On Saturday, he broke a rule that is risky to break, by swimming at some distance from the crowd. Sharks patrol the shore for seals. They are white sharks, which were once called man-eaters, and sometimes the men in gray suits, since they are gray with white undersides. They are shaped like torpedoes with fins, a minimalist fish, and there is nothing fancy about their appearance, as if only two colors were necessary for a serious creature. On videos taken from airplanes, you see them moving lazily, unconcerned, since nothing threatens them. The planes tend to be working for Greg Skomal, of the Massachusetts Division of Marine Fisheries, who, with the help of the Atlantic White Shark Conservancy, has been tagging white sharks for the last few years in order to determine how many visit the Cape—white sharks are not so much migratory as footloose; one of the surprises of tagging them has been learning that instead of following patterns or routes they seem to go wherever the hell they feel like. When Skomal stabs them with a tracking tag on the end of a harpoon, some of them don’t even react, although this summer, one of them leapt up beneath him as if to attack him as he stood on the bow pulpit with his harpoon.

Each summer since I wrote about Skomal, I’ve checked in with him. I know there are sharks around, because every week or so I see a plane travel along the shore and then begin to circle over an area. Before long, Skomal, whose boat I can recognize because it is the only one I ever see with a pulpit, arrives and I can see his figure on the pulpit. Or I see the boat passing on its way to Chatham, its home port, after a day off North Truro, where there is a colony of seals so large that it fouls the water around it.

Saturday’s attack was not the only one this summer. In August, a man was bit by a shark at Longnook Beach, in Truro. My family and I were on the beach when it happened. We watched the man being carried on a stretcher made of towels to the cops and rescue workers on the beach who put him on a proper stretcher. He was sixty-one years old, a neurologist from Westchester. As he passed, a woman ran up and said, “Is he all right. Is he alive?” Her knees seemed to give way. To reassure her, someone said he was, but there was no way to know. Weeping, she added herself to the procession climbing the steep dune to the parking lot, where an ambulance took him to South Wellfleet, and a helicopter took him to Boston. He survived, but I read that he is still in Boston, in a rehab facility. Videos of the young man in Wellfleet show the rescue workers in the parking lot pumping his chest to revive him, which suggests that he was already close to death. The ambulance took him to the hospital in Hyannis, maybe thirty-five minutes away in summer traffic, but he was dead by the time it arrived.

When I am on the Cape, I am in the ocean nearly every day, since I like to body surf. After the attack in Truro, I was now and then uneasy. Skomal once told me that sharks have an instinctive fear of being beached, so they avoid the area within the breakers, which made me feel safe, relatively. Wearing a wetsuit, though, I look like a seal, and sometimes stretched out within a wave, I feel that sense of dread one feels, or at least I feel, when I have to go into a dark basement, even though I know there is nothing there to harm me.

The young man’s death is unspeakably sad, especially as it combines pleasure and catastrophe, like those deaths one reads about of newlyweds on their honeymoons. The world turns on an instant, and nothing is the same after. There are already Cape Cod politicians who are blaming his death on what they claim has been a lax attitude about the dangers of sharks. But what should have been done? In Australia, which has attacks frequently, there are beaches protected by nets, but I don’t see the federal government paying for that—the backshore in Wellfleet and Truro is part of the Cape Cod National Seashore. Even with binoculars, a lifeguard can’t see a shark from a lifeguard stand. Being ambush hunters, sharks don’t often travel at the surface, where they would be revealing themselves. The only real protection would be to have a sentry plane looking for them, but a plane can’t be in all places at once.

A person can only accept that the ocean is dangerous, and no agency protects human life. This is not an easy thought to carry around, especially on vacation. After the attack in Truro, in August, the beach was closed, but we went there anyway and swam, although it was forbidden. If something had happened to me, I would have had only myself to blame, but I didn’t think anything would. I don’t know how I will feel next year.