Home Culture A Film About the Painter Rackstraw Downes | 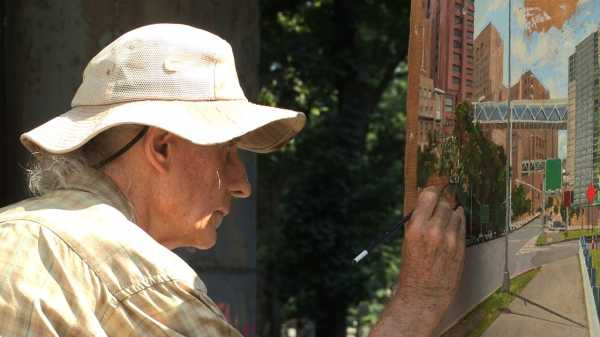 This Saturday, at the Betty Cunningham Gallery, on Rivington Street, there will be a rare showing of Rima Yamazaki’s film “Rackstraw Downes: A Painter.” If it sounds like a documentary about Rackstraw Downes, it isn’t, although it is composed entirely of scenes of the landscape painter painting. The film might easily be mistaken for a documentary, especially at the outset: we see the painter set up his easel en plein air and begin to paint, in this case from the vantage of Route 9 in Washington Heights, underneath an overpass that is also an on-ramp to the George Washington Bridge. We watch him consider each stroke, each dab of oils, but, as opposed to the standard formula used to churn out documentaries these days—take talking heads, combine with archival footage, adorn with music, and sprinkle with mawkish reënactments—the only voice we hear is that of the painter, who is also a writer, occasionally reading a few pages from his essays on art or painting. Rather than a documentary, “Rackstraw Downes: A Painter” is a film, the subject of which is seeing.

This point was made the last time the film was shown in New York, in the spring of 2017, when Downes—who works in New York, Texas, and Maine, and is, like a rare bird or an endangered plant, painting in the hidden-away places that you realize, after seeing them, are in broad daylight in the New York City environs—showed up for a discussion with the filmmaker at Anthology Film Archives. Downes is scheduled to appear again, at the Cunningham Gallery, this weekend, to sign books and speak with Yamazaki. The film is showing in conjunction with an exhibition of his work, his first since 2014, at the gallery, and is expected to draw his small but devoted fan base (of which The New Yorker’s art critic, Peter Schjeldahl, counts himself a member). That the film is not so much about Downes was a point made by Downes himself, who, in the Q. & A. after the showing at Anthology, last spring, patiently offered a few A.’s, then asked Yamazaki if he could pose some Q.’s.

“May I ask you a question?” the seventy-nine-year-old painter said, a little tentatively. He spoke quietly, with a trace of his home landscape—Kent, where he was born, in 1939, before settling in the U.S. after attending the Yale School of Art. Since 1967, he has, as Yamazaki writes, “committed himself to painting from observation, on site, from start to finish.” In his wonderful but distressingly out-of-print diary of the construction of two paintings, entitled “Under the Gowanus and Razor-Wire Journal,” he writes about the importance of, in his words, “not knowing about panoramic constructions etc. but finding out as you go along, as [Cézanne] said, ‘By force of looking and working . . . ’ ” Downes’s paintings are panoramic—even when they are small, though they are often large, and they manage to solve problems of perspective and depth in ways that feel like poetic geometry proofs. The light is worked out with exactingly lush attention to atmospherics: you can pretty much judge the dew point looking at his skies.

“Why did you make a film about a painter?” Downes asked Yamazaki.

“I was just curious about the act of creation,” she replied.

As it turned out, she had called the painter a few years ago, just as he was about to go to Texas. He drives there every year. It’s a long trip, and he stops to eat at Cracker Barrels, which, in his experience, maintain an excellent collection of nineteenth-century landscape photography—an important influence on his own work. “There seemed to be a moment about 1860 when anybody could grab a camera and make a beautiful picture,” he said. He told Yamazaki to call back in April. She did. “I was really wary,” Downes said. “I had no idea who she was or what she did.” He asked her to send him some of her work, and she sent a film that looked at the dancing of the New York–based Japanese choreographer Yoshiko Chuma. Downes liked it. “It was so gently filmed,” he said. “With such nice attention to what was going on.”

Then Downes agreed to be filmed, but he set hard parameters. “I set out conditions,” he said. “You can film me, but I don’t want to have anything to do with it. I’m not going to pose for you. I’m just going to go to the site where I’ve been painting. . . . I’m going to be there every day.” This is one of the film’s great revelations for admirers of Downes’s work: the effort it takes to make effortlessly beautiful-seeming views. In the film, he’s dressed for the sun, standing in exhaust, tossed by the wind wash of passing trucks, while focussed on the tiniest strokes, the minute visual management of the highway, the cliffs, the modern glass building.

Of course, Yamazaki agreed to the parameters. She then filmed and managed to be unobtrusive, despite how close she brought her camera to the painter. “She got in very close to the palette,” Downes said, still seeming a little startled. “She got in extremely close—every hair in my nostril!” This continued for about ten days, during which he painted daily, from morning till afternoon, painting alternative views depending on the weather. Downes seemed to marvel at Yamazaki’s process, including her abruptness—“And then she said, ‘I’m done filming now!’ ”

To hear Downes discuss his work is to feel as if you are in a graduate class on the logistics of twenty-first-century landscape painting. In response to a question from the filmmaker on how he chose his site, the artist offered a view into his Cézanne-like attention to geology. “It’s right where the island drops off very drastically,” Downes said. “There are a bunch of buildings that are hanging on to these rocks. I found that very interesting, the juxtaposition. And then that glass building is one I passed on the highway a thousand times, and thought that would make a terrific painting, and was trying to find out where I could see it from.”

“You don’t decide, but you get a sense of it,” he said later. “By that time, you sort of arrive at something.”

The first question from the audience had to do with what might be called the regional quality of his work. “If you didn’t live in New York, do you think your paintings would look different?” an audience member asked. “I mean, would they be the same if you weren’t a New Yorker?”

“I think not, no,” Downes said. “I know, when I first went to Texas, I spent the whole of my first winter there painting a tourist painting.”

If you are painting over the course of months, another person asked, how do you paint the cars in the streets? “You start a vehicle and then it moves out,” he lamented.

The audience member then had a follow-up. “If you’re there five months, with alternate-side-of-the-street parking, they must be moving all the time,” he said.

“You use the front of one vehicle and the rear of another,” Downes said, nonchalantly. “All my cars are hybrids.”

At some point, the painter turned the conversation back to the film, which is a lovely and patient look at the landscape itself, at the phenomenological interaction between the world and a painter’s eye. In one scene, Yamazaki seems to see the very green that Downes is painting. “Those shimmering walls of green,” Downes said. “I thought immediately of the Indian filmmaker Satyajit Ray!” Yamazaki seemed pleased at the comparison. Downes then reviewed the film. “You were following your instincts and appetites, not mine,” he said. “And it’s very beautiful.”

Dow Rallies Over 1,300 Points Despite US Jobless Claims Recording All-Time...

Iran Nuclear Deal: A Timeline of Key Events From US Withdrawal...