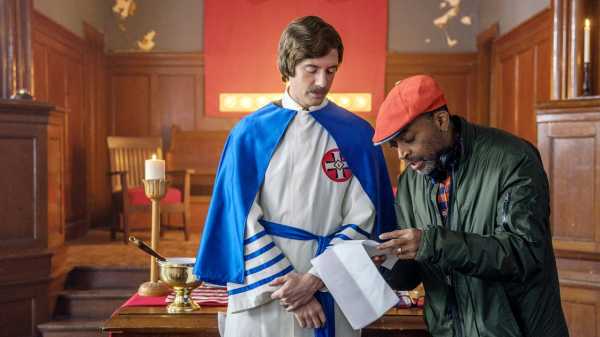 “The Award Equinox is upon us,” the Los Angeles Examiner reported in April, 1961. “It’s a season characterized by a brink-of-war tension in the world of entertainment, which frequently manifests itself in some rather bitter bad-mouthing and even occasional saber rattling by celebrities who, under less trying circumstances, are as amiable and forbearing as a bunch of Congolese soldiers at a hashish social.”

Indeed, the 1961 Oscars race was not without drama. That was the year that John Wayne had to chastise his “The Alamo” co-star Chill Wills for his overreaching campaign for Best Supporting Actor, including an ad that Wills placed in Variety claiming that his castmates were praying for him to win “harder—than the real Texans prayed for their lives in the Alamo.” “Psycho” was snubbed for Best Picture (which was won by “The Apartment”), along with its star, Anthony Perkins. And Elizabeth Taylor—midway through her scandalous marriage to Eddie Fisher—emerged from a near-fatal case of pneumonia, which required an emergency tracheotomy, to deliver a breathy Best Actress acceptance speech, for “Butterfield 8.”

Some Oscars years are destined for mishegoss, and the one that concludes this Sunday, at the Dolby Theatre, is one of them. To start, there’s been the drama surrounding the nominees. “Green Book,” up for five Academy Awards, including Best Picture, is based on the friendship between the black pianist Don Shirley and his onetime driver Frank (Tony Lip) Vallelonga—but Shirley’s relatives blasted the film for inaccuracy, saying that the two were never really that close. Add an apology for an anti-Muslim tweet from Nick Vallelonga (Tony’s son and one of the screenwriters) and an apology from the director, Peter Farrelly, for exposing himself on the set of “There’s Something About Mary”—not to mention critical pushback against the film’s tidy lessons of racial tolerance—and you’ve got a snowballing “narrative” against a potential front-runner. All that pales next to the saga of “Bohemian Rhapsody,” also up for Best Picture, which has a Director Who Shall Not Be Named (except in exposé form) and the disadvantage of being a clunky mess. People do love Queen, though.

Then there’s the ongoing soap opera of the Academy itself, under pressure from ABC to get its flagging ratings back up. In August, the Academy announced a new award, Best Popular Film, an idea that proved so unpopular that, by the next month, it had been postponed—possibly forever. Then came the announcement of the comedian Kevin Hart as Oscars host, which blew up in spectacular fashion, thanks to Hart’s history of homophobic material and “tweets of old,” as Hart put it, followed by non-apology apologies. After he quit, Ellen DeGeneres launched an ill-advised campaign to get him the job back, the result of which was a rare P.R. misstep for DeGeneres and the first host-less Oscars since 1989. Then, in recent weeks, came the Academy’s plans to shorten the ceremony by various means—cutting nominated songs, awarding some categories during commercial breaks—all of which ended in outcry and prompt reversals, like a desperate version of the hokey pokey.

The Academy, which only a few years ago was making bold strides to diversify its membership, now seems exhaustingly tone-deaf and indecisive, unsure how to grow its viewership without alienating its members or its core audience, who definitely want to see the Best Cinematography category in full. Putting aside how any of the proposed changes would have meaningfully attracted viewers (was anyone really avoiding the Oscars because they couldn’t stand to watch Best Editing?), the string of panicked about-faces has had a numbing effect. At times, it’s felt like watching the Oscars undergo an existential crisis, which the Times summed up in the headline “Are the Oscars Ashamed to Be the Oscars?” Typically, awards season is when Hollywood gets slammed for excessive self-congratulation. Self-loathing—that’s a new one.

Allow me, then, to remind you of some bright spots amid the slog. This is the year that Spike Lee was finally nominated for Directing, for “BlacKkKlansman,” twenty-nine long years after missing out for “Do the Right Thing.” (The fact that “Driving Miss Daisy” won Best Picture that year makes the current matchup with “Green Book” feel like an eerie retread.) There are several potential combinations of acting winners in which all four characters would be queer, among them Rami Malek’s Freddie Mercury, Mahershala Ali’s Don Shirley, the warped lust triangle of “The Favourite,” and the boozy duo of “Can You Ever Forgive Me?” Glenn Close, who has been nominated seven times and never won, may well end her losing streak with “The Wife.” And this Oscars season has brought one unmitigated pleasure: Richard E. Grant’s larky publicity tour.

Of course, the story of this year’s fraught Academy Awards could completely change come Sunday. Two years ago, no one knew we’d be talking about a wrong envelope until the last dizzying moments of the ceremony. The show, produced by Donna Gigliotti, could pole-vault over lowered expectations. A galvanizing acceptance speech or spontaneous moment may lift everyone’s spirits. And, no matter which film wins the wide-open Best Picture race, the result will write this year’s narrative anew. If “Roma” wins, Netflix will become the first streaming service to reach the Oscars promised land—and with a foreign-language film about an indigenous Mexican nanny, no less. If “Black Panther” wins, it’ll be a hallmark moment for comic-book movies (and a repudiation of the idea that “popular films” need their own category). If “Bohemian Rhapsody” wins, welcome to the Twilight Zone. I’ll be in the nosebleed seats at Dolby Theatre, sending dispatches.

Oversight committee asks Zinke for details on cost of $139,000 doors

Joe Biden was asked to answer for Obama’s immigration record. He...