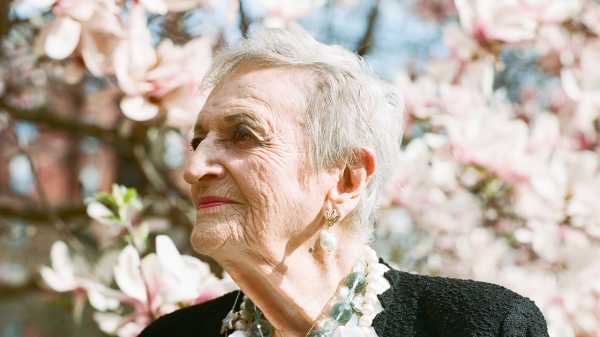 On April 26, 1924, a pregnant woman named Mollie Green was in the perfume department of Wanamaker’s Department Store, in Philadelphia, when her water broke. She did not live in Philly; she was working as a milliner in Atlantic City, New Jersey, and on one final weekend shopping spree before the baby came. She rushed to a nearby hospital, where she gave birth to a baby girl, Annette. On her return trip to New Jersey, by bus, a few days later, she had an extra passenger in tow and smelled like Lucien Lelong perfume, which would be her signature scent for the rest of her life.

Annette Green is now in her nineties and lives in a chic, sun-filled apartment, on Gramercy Park, where I met her one recent afternoon. She likes to tell her birth story not only because it is high-drama but because it contains some of the major themes of her life: a fashionable woman alone in a big city, the heady whiff of fine fragrances. She recounts it in her new memoir, “Spritzing to Success with the Woman Who Brought an Industry to Its Senses,” wondering whether it was then, in her final prenatal moments, that “my genes got scrambled and the most unappreciated of the senses—smell—came out on top.”

You may not know Annette Green’s name, but if you have ever worn perfume, shopped for perfume, or enjoyed the scent of someone else’s perfume, you have likely been touched by her long and remarkable career. For more than forty years, she worked at the Fragrance Foundation, a nonprofit organization dedicated to promoting the perfume industry in the United States. As the executive director and, later, the president, she did more than perhaps any other figure to shape the trajectory of the modern fragrance industry. She also launched the first American fragrance-museum collection, which includes hundreds of bottles dating back to the eighteenth century, and established the FiFi Awards, in 1973, which have become something like the Oscars of perfume. Still spry, sharp, and wickedly funny, Green today is something of a grande dame of the industry. When I walked into her two-bedroom apartment, whose powdery scent extends into the hallway, the first thing she did was ask to smell my wrist—a clubhouse gesture among fragrancephiles. That day, I was wearing a woodsy blackberry scent by Byredo. Green took my arm and inhaled deeply, then gave me an approving nod. 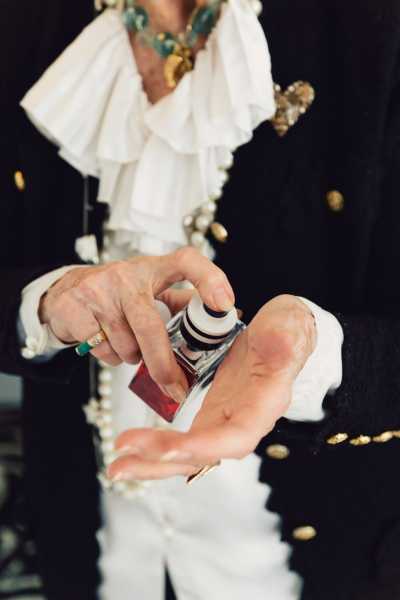 A miniature purple crystal flacon, one of several vintage mini-bottles of fragrance that Green keeps in her bathroom.

Green’s living room looks like it could be the lobby of a Miami beachfront hotel, all cream-colored sofas, glass tables, and gold gilding in an Art Deco pattern on the walls. She was wearing bright green eyeshadow, an Eileen Fisher silk shirt, and a jewel-encrusted, heart-shaped brooch that she’d recently purchased at the Metropolitan Opera shop. As she showed me through the small space, where she has lived alone for four decades (she never married), she talked about her early years, after she escaped the boredom of Newark, New Jersey, where she was raised, for the cosmopolitan life of Manhattan, in the nineteen-fifties. At first, she wanted to be a writer and took night classes at N.Y.U.’s school of journalism. She applied for a job at Harper’s Bazaar but was told that there were no openings. Instead, she was hired at the less glamorous American Druggist, a cosmetics-trade publication, and from there moved to the sales department of the cosmetics company DuBarry. In 1961, with a female partner, she started her own P.R. agency. They rented out office space in a historic building on lower Park Avenue. “They only had ladies’ rooms every fourth floor,” she said. “So we were in the elevator a lot.” They had only two clients to start with, according to her memoir: the cosmetics brand Helene Curtis and the French Department at New York University, which asked her to throw the first annual “French Carnival” in the Washington Mews. Green in the living room of her two-bedroom apartment.

One day the following year, while at lunch at the Doral Hotel (now the W Hotel), she received a call. The heads of four major perfume companies wanted to meet her, right away, at the Waldorf-Astoria. She zoomed over in a cab and listened to their pitch: the Fragrance Foundation, which was founded, in 1949, by six cosmetics houses, was defunct. They asked Green to take on the task of reviving it. Back then, most consumers would buy only one fragrance at a time. Many would pick a signature scent, usually a French one, and then stick with it for life. Green saw that the key to expanding the American perfume industry, and to reanimating the Foundation, was to promote the concept of a “fragrance wardrobe,” a collection of perfumes to be worn in rotation according to one’s mood or occasion. She organized panels offering advice to perfumers on how to advertise their products, by, for instance, taking advantage of new technologies, like scent strips in magazines. She also pushed to make fragrances more accessible—not just luxury goods for pampered doyennes but daily staples for girl Fridays. Without Green, there might be no fragranced body butters, no fancy hand soap in high-end hotels, no fruity floral deodorants. She wanted, she writes in her book, to make scents “that women could buy for themselves.”

At the same time, she pushed for more visibility for perfume in the worlds of high fashion and art. In the late nineteen-sixties, she created the “Fragrance/Fashion Promenade,” a fashion show at the Waldorf-Astoria, where perfume houses were invited to interpret their famous fragrances in sartorial form. According to Green’s memoir, Elizabeth Arden tapped a “then relatively unknown designer” named Oscar de la Renta to interpret the fragrance Blue Grass. De la Renta dressed the model Veruschka in a nude bodysuit and wrapped her in clear cellophane; she waved a wand that “magically released the fragrance as she glided around.” 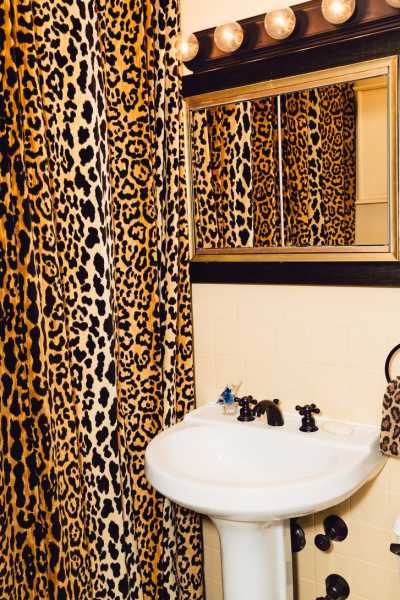 Green’s guest bathroom. Her bedroom is done in a zebra theme.

Green invited me to step into her “gigantic bathroom,” then opened the door to a tiny powder room that contained an explosion of leopard print: leopard shower curtain, a wooden toilet seat with a leopard-print inlay. “Somebody gave me that toilet seat and I created this whole bathroom around it,” she said. She painted the walls gold and hung up a framed illustration of several of Guerlain’s famous perfumes, such as the pricey amber scent Shalimar, a perennial favorite of classic Hollywood stars, such as Rita Hayworth and Brigitte Bardot. We moved into her bedroom, which is done in a Zebra theme. Several dozen bottles of perfume were crowded onto an oversized mirrored tray and an adjoining dressing table: Chanel’s Beige, Jean Patou’s Joy, Balenciaga’s Florabotanica, a vintage dram of Paloma Picasso. This was just a highly curated selection, she noted. For Green, keeping only a hundred bottles around is an act of minimalism. 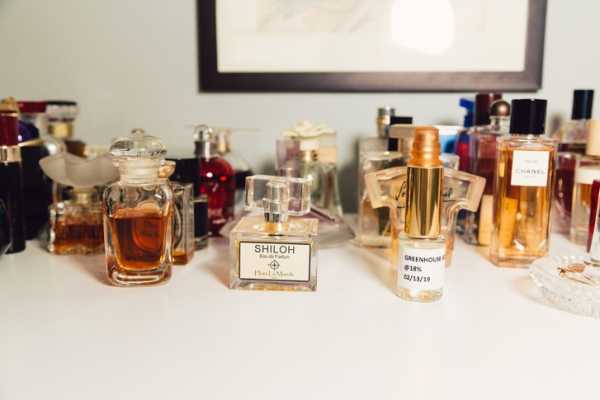 Green’s perfume vanity features a sample of Annette’s Greenhouse, a new blend that a perfume designer made just for her.

When she retired from the Fragrance Foundation, in 2003, Green bequeathed the organization’s perfume archive to the Fashion Institute of Design & Merchandising, or F.I.D.M., in Los Angeles. The prestigious school still holds a permanent exhibition in the Annette Green Fragrance Gallery, on its second floor. At the Fashion Institute of Technology in Manhattan, the fragrance chemistry lab, the only perfume-development facility at a U.S. college, still bears Green’s name. She showed me a glass curio filled with dozens of awards, including the Caterina de Medici Award, from Italy, and the Medal of the City of Paris. On the wall in her hallway were letters of commendation from the former New York City Mayors Ed Koch and David Dinkins, who hailed Green as “a pioneer.” She also showed me a framed copy of a Talk of the Town piece, from 1994, about “aromachology,” the study of smell’s influence on human behavior, in which Green predicted that someday, public spaces would feature “sensory-fulfillment centers,” where people could go for an olfactory boost.

Back in her living room, on an ivory love seat, Green encouraged me to leaf through a coffee-table book she had written, on the history of “aromatic jewelry,” or necklaces and rings that can hold small drams of fragrance. (They were popular among the ancient Egyptians.) I asked her if she ever gets lonesome, living by herself. She said that she lives by the advice of the late actress Kitty Carlisle Hart, who once told her, “I don’t have a husband or a lover, so why should I stay home?” Green goes out often with her many friends, including the eighty-seven-year-old supermodel Carmen dell’Orefice. She’d recently been to a pop-up “tango opera” inside a “little brownstone on Forty-sixth Street.” She still receives requests for advice from designers. She attends F.I.T. graduation every year and drinks a glass of Sancerre every night. 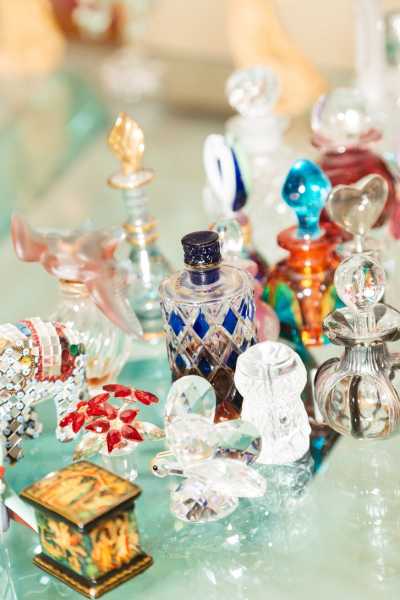 Green keeps a collection of vintage perfume bottles and snuff boxes on her coffee table. 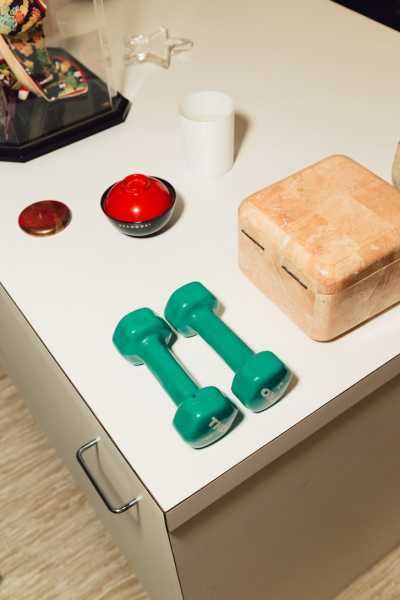 Green keeps in shape by lifting a set of sea-foam-green barbells.

This Friday, Green celebrates her ninety-fifth birthday with a party at Michael’s restaurant. It will be an intimate affair, she told me—just seventy people. She is still deciding what clothes to wear—perhaps “a gold-and-chocolate-brown brocade jacket, with a Nehru collar, and black silk pants.” (She wore the same outfit when she turned eighty.) Scent-wise, she is set: she’ll be wearing Annette’s Greenhouse, a brand-new fragrance, developed especially for her by Frank Voelkl, the perfumer behind cult-favorite scents like Le Labo’s Santal 33 and Glossier’s You. It is a spicy, watery, vegetal scent, like cucumber spa water cut with fresh jalapeños. Green has not yet decided if she wants to market the scent or keep it for herself, as a trade secret.

A few days after our visit, I ran into her again, at the Perfumed Plume Awards for Fragrance Journalism, where “Spritzing to Success” was being honored as the Fragrance Book of the Year. As I was leaving, she slipped a small vial into my hand. It was a sample of Annette’s Greenhouse. “Shhh,” she told me, with a mischievous wink. “You’re the first to have this.” 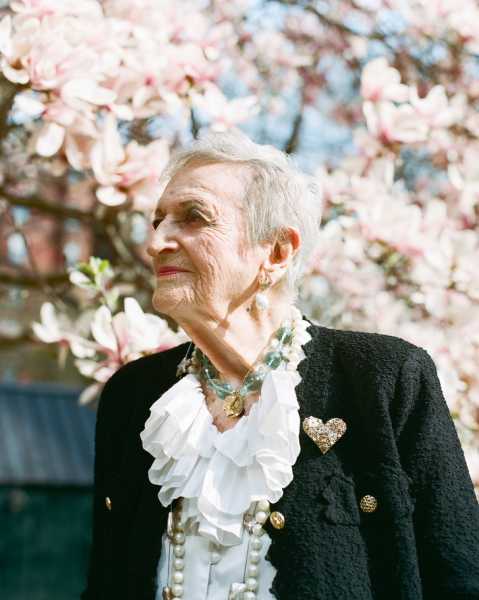 Green walks almost every day in Gramercy Park. She has lived on the park, by herself, for more than forty years.

Gareth Southgate’s England squad: What we learnt from first selection since...

The Senate just confirmed a director for CFPB who has no...