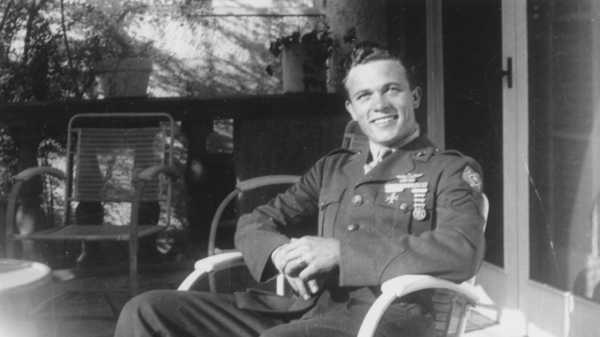 Scotty Bowers is one of the dirtiest nonagenarians you’re likely to come across. He’s also a Hollywood legend of sorts. Bowers has been called the “pimp to the stars,” “Hollywood’s gentleman hustler,” and “Mr. Sex,” which are all ways of saying that, in the buttoned-up middle decades of the twentieth century, he arranged sexual liaisons—or provided them firsthand—to people in show business. Many were homosexual trysts involving iconic movie stars, according to Bowers, who first opened up the little black book of his memory in 2012, with the tell-all “Full Service: My Adventures in Hollywood and the Secret Sex Lives of the Stars.”

In Matt Tyrnauer’s new documentary, “Scotty and the Secret History of Hollywood,” Bowers again tells X-rated tales of Old Hollywood, as if fondly recalling childhood fishing trips. After serving in the Marines in the Second World War, Bowers set up shop at a gas station on Hollywood Boulevard, which conveniently had a trailer in back with two king-size beds. As his business grew, he expanded to the motel across the street. He claims to have fixed up men with Spencer Tracy and women with Katharine Hepburn, supplied tricks for George Cukor’s soirées, and had a three-way with Lana Turner and Ava Gardner at Frank Sinatra’s house. He says that he had sex with Cary Grant and Randolph Scott individually, as a threesome, and with a “buddy.” The Duke and Duchess of Windsor? Also clients: on a royal visit to Beverly Hills, Bowers says, he furnished “a girl for her, a guy for him,” adding, “They thought what I did was the nicest thing that ever happened to them.”

There’s historical value to all this scuttlebutt. In the days of the Hays Code, studios marketed their stars as wholesome extensions of middle America, and sexual freedom went underground. The vice squad regularly raided gay bars, and being outed in the pages of Confidential spelled career death. “People get very angry at the idea of these beloved Hollywood icons being revealed to have secrets,” Stephen Fry tells Tyrnauer, “but actually all it is that Scotty’s doing is revealing that these people were real.” In recent years, gay stars such as Tab Hunter and George Takei have recounted the fear and secrecy that gripped them during their years in the closet. Bowers identified an underground economy and collected twenty-dollar bills—less a pimp than a charity worker, or, as one former trick calls him, an “introduction service.”

On Saturday, Bowers was the guest of honor at a ninety-fifth-birthday party, held at a Fifth Avenue penthouse apartment belonging to one of the film’s producers. He was in New York for the first time in twenty years, for the movie’s opening weekend. Out on the terrace, Bowers sat in a wheelchair wearing a denim shirt and jeans, telling guests such as John Cameron Mitchell fifty-year-old gossip. “He was a mad queen!” Bowers said of a long-dead television personality. “He was out all the fucking time. He would cruise so much, he’d pick up two guys at a time.” Then he told a story about Cole Porter (“a big user” of his services) involving seventeen men and the phrase “boom boom boom.”

Did he have a secret to longevity? “My mother lived to be a hundred and one,” Bowers said. “My grandmother lived to be a hundred and a half. So that could come from there.” Asked to sum up his life’s work, he teared up a bit. “I think after being in World War II, seeing so many guys killed, you say to yourself, Live a nice happy life. You know what I mean? Don’t worry about this and that. So many people go through life and don’t do a thing, thinking there’s another life, and they’re going to have a wonderful time. Bullshit! There’s no better life—you might as well do it here and now.”

More guests arrived: Joel Grey, Bob Mackie, Parker Posey. Bowers regaled them with tales of James Dean (“Stardom went to his head very quickly”) and Spencer Tracy (“He’d get so fucking loaded, he’d have to crawl to bed”), along with a few uncheckable stories about the still living. Naturally, when Bowers began spilling the beans, in his late eighties, some people raised moral objections. (“Is it right? Do you out people after they’re dead?” Barbara Walters fretted, on “The View.”) Others were inclined to think that he was making it all up; in the documentary, several former tricks, now in their sunset years, attest to his truthfulness. At the party, a guy named Phil Sansone said, “Scotty doesn’t have it in his heart to lie. He’s not a bullshit artist.” Sansone met Bowers in 1983, he said, and worked as a bartender for parties that Bowers threw in Beverly Hills. “I never had anything sexual with him, because I met him in the early eighties and AIDS had come out,” Sansone said. “So he started to slow down with the sexuality and concentrated specifically on bartending. And tree-cutting.”

When I asked Bowers which of his stories people never believe, he said, “They don’t believe somebody can be foot-fucked,” and proceeded to warn of the physical hazards. I told him that wasn’t quite what I meant, and he went on, “A lot of people will see an actress or an actor and go, like, ‘Oh, Spencer Tracy could not suck a cock.’ Everybody sucks a cock, so he can suck it, too!” In other words, Hollywood has always sold a myth, one that still maintains a strong hold on the popular imagination. Then again, there’s an opposite myth that’s just a strong: that of Hollywood as a moral cesspool. It’s the version that Kenneth Anger put forward in his iconoclastic book “Hollywood Babylon,” and can be just as alluring. (The current season of “You Must Remember This,” Karina Longworth’s showbiz-history podcast, is devoted to fact-checking Anger’s most salacious claims.) In our current moment of reckoning, the den-of-sin image of Hollywood has come roaring back, with the alt-right eager to weaponize it against left-leaning celebrities. Whispers of pedophilia rings abound. Given the exposure of sexual predators like Harvey Weinstein and Kevin Spacey, who wouldn’t believe the worst?

Listening to Bowers, you start to think that everyone in mid-century Hollywood was a pansexual hedonist—and perhaps a good slice of them were. As Bowers might say, so the hell what? As a product of the sexual revolution, Bowers is notably—sometimes unsettlingly—out of step with the way that we discuss and debate sex nowadays, concerned less with coercion than with liberation. (He reveals to Tyrnauer that he was molested by a neighbor as a child, but waves away any concern: “There’s nothing wrong with that, baby!”) If pleasure is a God-given right, he views his life as a kind of humanitarian project. “So many people have said that the nicest and best time of their whole life was at that gas station,” he says in the film. “And that’s why I felt good that I made so many people happy.”

At the party, a tray of birthday cupcakes appeared, and the host toasted Bowers: “You’ve touched so many people’s lives. Literally.”

“If you can’t open your mind in this life, when are you going to do it?” Bowers said. Everyone sang “Happy Birthday to You,” and someone handed him a cupcake with a candle. “I can still blow,” he said, smiling.