Home Culture A Hollywood Movie About Christianity Worth Seeing 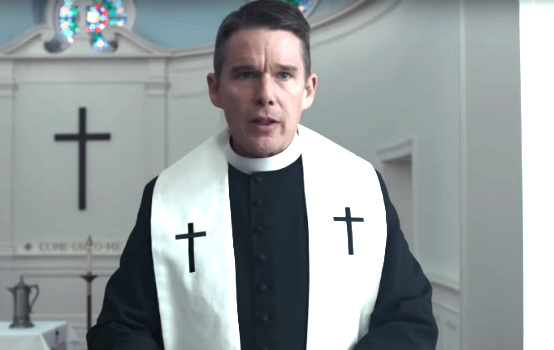 American evangelicalism has always had a strong sense of the apocalyptic, urging the faithful toward reflection on the eschatological judgment to come. Mainline Protestantism, by contrast, has tended towards a more immanentist sensibility, stressing the social gospel and the need for transformative change on earth. But “First Reformed,” written and directed by “Taxi Driver” screenwriter Paul Schrader, transcends this binary, thrusting the clergyman at its heart into a deep struggle with existential despair.

As the film opens, Reverend Ernst Toller (Ethan Hawke) is pastoring First Reformed Church in the little town of Snowbridge, New York. While his church is a historical landmark on the cusp of celebrating its 250th anniversary, his congregation is nearly extinct: only a few devoted parishioners straggle in on Sundays to hear the Word and receive the Eucharist. Not far off, though, Abundant Life Fellowship—the local megachurch—is booming.

Bit by bit, Toller is inexorably drawn into the lives of Mary (Amanda Seyfried) and Michael (Philip Ettinger), a young couple who have just started attending First Reformed. (For Mary, at least, Abundant Life “feels more like a company than a church.”) Michael, we learn, is a radical environmentalist obsessed with impending eco-collapse: upon learning Mary is pregnant with their child, he urges her to get an abortion, arguing that it would be immoral to bring a child into a world destined for damnation. His home is littered with charts and books detailing the horrors of climate change, his criminal record is littered with activism-related arrests…and most disturbingly of all, hidden in a chest in his garage is a vest packed with explosives.

But in Michael, Toller sees something more than a parishioner in need of counsel. He sees a tortured prophet daring to speak the truth. And soon, Michael’s sense of doom begins to infect Toller himself.

Through a series of anguished, bourbon-fueled journal entries, Toller’s personal ordeal of belief unfolds. It would be inaccurate to call it a crisis of faith in the conventional sense—Toller is never tempted by atheism or agnosticism, but rather by a creeping sense of futility and horror. “Will God forgive us?” he muses repeatedly. Can the Creator of heaven and earth forgive our destruction of His cosmos?

That’s a fascinating question in its own right, but “First Reformed” is much more than a well-wrought environmental fable: it’s a sober-minded meditation on what it means for the Christian Church to be the Church. As we discover alongside Toller, Abundant Life is heavily funded by donations from the local energy tycoon—and any message the tycoon doesn’t like is squelched. Conscience must take a backseat to cash flow. Such a dynamic, naturally, is anathema to any possibility of prophetic witness.

Toller—rooted as he is in the historic Reformed tradition—isn’t having it. His struggle is reminiscent of James K.A. Smith’s study of “cultural liturgies”—the bodily habits and practices through which our spiritual and ethical sensibilities are formed. Smith argues that the physical components of the traditional liturgy inculcate essential tenets of the faith: that we kneel only to God, not Caesar; that our first allegiance, over and above any national identity, is to the Kingdom of God; that we stand equal alongside our brothers and sisters as children of God; that through the sacraments we experience the utter unmerited givenness of all things; and so forth. These practices, Smith contends, help form a bulwark against “church capture” and the dissipation of Christian identity. Worship is a declaration of one’s citizenship in the Kingdom of God, and—in contexts where the kingdom of man oversteps its bounds—an act of defiance and opposition to the “powers and principalities” of the earth. Building on a similar foundation, Toller—and “First Reformed”—declares that the Church ought never be a handmaiden to those interests who would dilute her message. And regardless of what one thinks of Schrader’s environmentalist focus, that point is valid.

Even better, the movie’s engagement with these high-level themes doesn’t come at the expense of human drama. Hawke’s Toller is a tortured figure, wracked by physical ailments, alcoholism, and longstanding demons from his past. When others reach out to him in kindness, Toller pushes them away: for a man who weekly announces the good news of divine forgiveness, he’s incapable of giving or receiving any love himself.

His alienation, the film hints, is a self-inflicted wound—and indeed, as the story unfolds, we watch Toller’s ostensibly theological concern for creation teeter on the edge of a self-absorbed messianism. Toller echoes David Bentley Hart’s bracing hypothesis that “most of us would find Christians truly cast in the New Testament mold fairly obnoxious: civically reprobate, ideologically unsound, economically destructive, politically irresponsible, socially discreditable, and really just a bit indecent”—but unlike Hart, Toller clearly believes himself capable of becoming such a perfect Christlike figure. Tragic consequences inevitably follow. Accordingly, those inclined to see in “First Reformed” a straightforward vindication of their environmental concerns had best not get too comfortable: Schrader is more than happy to turn his cinematic scalpel on them too, stripping away any pretensions of superiority. All have sinned, Schrader reminds us, and grace is beautiful because it is wholly unearned.

In sum, “First Reformed” is a complex, multilayered narrative that defies attempts at straightforward categorization. It’s also one of the few artistically excellent films I’ve seen that engages Christian theology with genuine seriousness (a particularly memorable sequence, for example, features an extended argument between Toller and the pastor of Abundant Life over environmental stewardship and the implications of Thomas Merton’s work). There should be far more movies like this one.

At the same time, this is certainly not a film for all tastes. It’s almost unremittingly bleak, punctuated only by moments of black humor and startlingly violent imagery. Perhaps paradoxically, the rare flickers of hope reflected in Schrader’s work always accompany moments of real suffering and darkness. Yet those willing to follow Reverend Toller on his painful journey will find the experience both haunting and profoundly rewarding.

John Ehrett is a native of Dallas, Texas, and currently lives in Los Angeles, California. He holds a J.D. degree from Yale Law School and a certificate in Theology and Ministry from Princeton Seminary.

Germany Warns Against EU-US Trade War, as ‘Transatlantic Relations Are at...