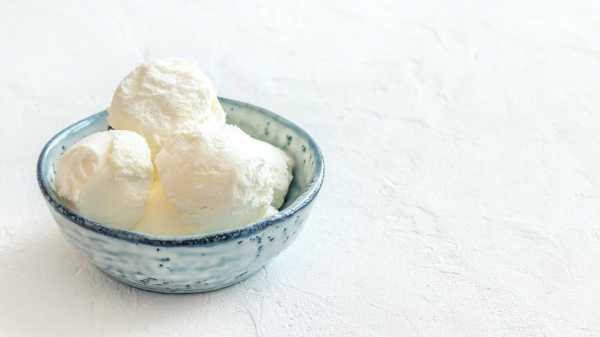 There is no easier way to prove that you’re a capable person than by making, from scratch and without special equipment, foods that seem inherently store-bought and expensive. Instead of forking over eight dollars for a box of artisanal crackers, you can hand-craft your own in about as much time as it would take you to go to the store, by mixing flour, water, olive oil, and salt into a dough, rolling it thin, cutting it into squares, and then baking them briefly, until they turn golden brown. A side of raw salmon, sprinkled liberally with sugar, salt, and dill and left in the fridge for a few days, will transform into gravlax so delicious that you could probably convince your guests you got it at Russ & Daughters—if you weren’t after the credit.

At a dinner party I attended recently, when one of the hosts—an artist friend, who can be a little loopy—announced, as we cleared our plates of lamb tagine, that she was going to whip up some ice cream for dessert, I was skeptical. Making ice cream typically involves not only a machine but more than a day of preparation: you have to pre-chill the machine’s canister overnight in the freezer, prepare your base—often a custard that you’ve cooked on the stovetop and let cool in the fridge—and then allow the machine to churn and freeze it for twenty or so minutes before putting it in the freezer for several hours to let it fully solidify.

But my friend didn’t have an ice cream machine. She disappeared into the kitchen and emerged with two Ziploc bags, one sandwich-sized and one gallon-sized. She had filled the bigger one with ice and salt, and the smaller one with a mixture of half-and-half, vanilla extract, and sugar. She placed the smaller bag in the bigger bag, sealing it shut. Then she handed the bag-within-a-bag to her husband, who—with the calm assurance of someone who knows he’s about to blow some minds—proceeded to shake it vigorously, as though it were a large maraca. When he grew tired, he passed it to another guest; it went around the table, each person finding her own rhythm. After ten minutes or so, we paused, and inspected the contents of the smaller bag. To my amazement, the liquid started to solidify into a smooth paste. After a few more minutes of shaking, we peered into the bag again. The substance inside was considerably softer than what would have come out of a carton, but, by God, it was ice cream, enough for six people to have a few small spoonfuls each.

No matter how you make ice cream, the key is to keep the mixture moving. If you simply combine and freeze ice-cream ingredients, the water in the mixture will form into ice crystals, leaving you with something more like a brick of popsicle. Churning, as the freezing begins, prevents the crystals from forming, keeping the water and fat molecules evenly dispersed and the texture creamy. An electric machine, of course, takes care of the movement for you, and, depending on the model, freezes your base with either a cold-retaining gel, contained in the walls of the canister, or with a chamber that allows you to surround the canister with with ice and salt, which melt to create a frigid bath. (Ice and salt also go in the electric machine’s precursor, a hand-crank-operated wooden-bucket contraption still readily available online if you want to play homesteader—although a real homesteader would probably build her own.)

Plenty of people have devised ways of getting around using a machine; plenty of people made ice cream before the machine was invented. The cookbook author and pastry chef David Lebovitz suggests putting your base straight into the freezer and then taking it out, every 30 minutes or so, for a good stir. Faith Durand, the editor of The Kitchn, fills a mixing bowl with ice and salt, nestles a smaller bowl inside it, then churns her base in the small bowl with a hand mixer, before freezing the the whole thing. (Thomas Jefferson, an ice cream fiend, used a similar approach.) The food-science whiz J. Kenji Lopez-Alt has a recipe that involves making a custard, combining it with fresh-whipped cream, freezing the mixture in ice cube trays, and then food-processing the frozen cubes with more cream; it’s perfect for anyone who cares about getting her “overrun all the way down to 24%.” The popular “no-churn” technique, perhaps easiest of all, calls for a quart of heavy cream, whipped into soft peaks, and a can of condensed milk, poured into a loaf pan and left to freeze—though, as Lopez-Alt points out, this is really more of a mousse, as smooth as ice cream but with an airier, chewier texture that will be familiar to anyone who has ever enjoyed a frozen container of Cool Whip. In my mind, none of these beats the spontaneity, humble materials, and built-in upper-body workout of the plastic-bag method. It has all the appeal of a magic trick, although of course it’s not—just simple science, taking place before your very eyes. (My friend, it turned out, learned it in elementary school.)

A few weeks ago, at Una Pizza Napoletana, a restaurant on the Lower East Side, I ate a spectacular vanilla ice cream made by Fabian von Hauske Valtierra, one of the chefs there. It was dense, smooth, and relatively soft; the flavor was fresh and milky, with a hint of vanilla and a potent undercurrent of salt. The other day, on Instagram, when von Hauske Valtierra posted a photo of a spoonful of it and suggested, in the caption, that he doesn’t cook his base before churning it, I wondered if his recipe might be a good candidate for making in a bag.

When I got him on the phone, von Hauske Valtierra told me that, at Una Pizza, he uses a Cattabriga K20 Counter-Top Batch Freezer, an industrial-size electric machine with a powerful compressor that churns and freezes the base much faster than a home model. He doesn’t use eggs, he explained, because he wants it to taste purely of milk and cream, and he doesn’t heat his dairy for the same reason: to maintain the “fresh flavor that you get straight from the jug.” He never lets his ice cream freeze for more than half a day, serving each batch only on the day it’s made; after that, you lose some of the flavor. He’d never tried the bag method, he said, but he thought he’d maybe seen his mom do it, and he’d definitely seen double-chambered plastic balls, designed for kids and camping trips, that allow you, ingeniously, to churn ice cream by playing catch or soccer.

The recipe for Von Hauske Valtierra’s base includes equal parts milk and cream; sugar as well as corn syrup, for “a bit of elasticity”; a little dried milk powder, as a thickener; and salt and vanilla to taste. The other night, I tried making it using the bag method. Actually, it was a modified version of the bag method; after my gallon-sized Ziploc sprung a leak, spraying saltwater across the floor, I switched to using a big glass jar, tucking the cream-filled bag inside it. (A coffee can works well, too; some recipes suggest rolling it under your feet while you watch TV.) After fifteen minutes of shaking, I opened the jar, pulled out the bag, and grabbed a spoon. The substance inside was a strikingly convincing, if softer, approximation of what I’d eaten at Una Pizza, milky-fresh and creamy and boldly salty. Do try this at home, as a party trick on a hot summer night.

½ tsp vanilla extract (or to taste)

⅛ tsp salt (or to taste)

1. Mix or whisk together the milk, cream, sugar, corn syrup, and milk powder . Add vanilla and salt, adjusting to taste.

2. Fill the gallon-sized Ziploc with three cups of ice and the kosher or rock salt.

3. Pour the milk-and-cream mixture into the sandwich-sized Ziploc, seal it tightly, getting as much air out of the bag as possible, and put it inside the gallon-sized Ziploc, jostling it a little so that it’s surrounded by the ice and salt. Seal the large bag.

4. Shake vigorously for 15 to 20 minutes (wearing gloves is recommended), or until the mixture has reached desired texture. Remove the smaller bag, serve and enjoy.