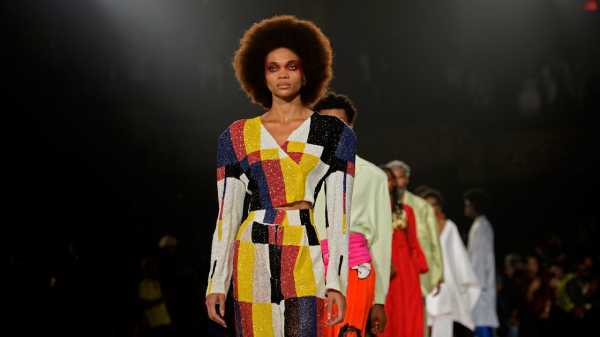 What shall we wear in the spring, if we are fortunate enough to make it that far? The womenswear designers who showed collections at New York Fashion Week, which clomped into town at the end of last week, are proposing a lot of bold shoulders, padded into swishy power suits and pouffed into floral exoskeletons. The menswear featured bright takes on Americana, a dark revisionist Western of boots and work shirts. Younger designers seemed keen on re-clothing notions of women and men, with fluorescent expressions of gender fluidity and slinky knitwear for digital androgynes. 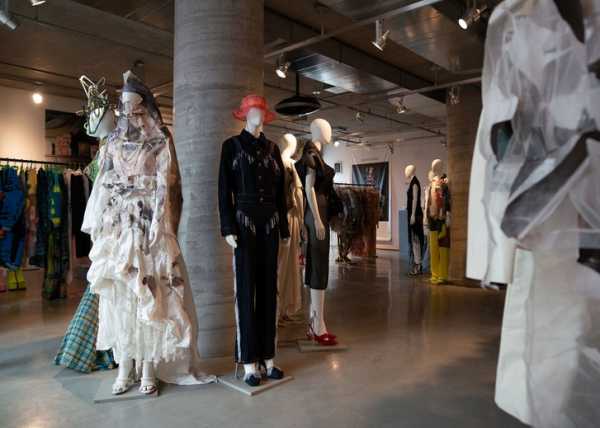 I am optimistic about the futures of some of the very youngest designers precisely because they are palpably pessimistic about the future at large. A show connected to a thesis exhibition of Parsons M.F.A. graduates, which is up until September 11th, displayed clothes designed for Doomsday, with survivalist vibes and Mad Max leisurewear and looks updating Edith Beale’s anxious clashes of self-soothing layers. A couple of the Parsons designers used uneasy greens to evoke environmental angst. A few assembled dresses as if hacking together collages from scraps of cultural detritus or literal trash. One sent around a clear plastic suit, its pockets stuffed with leaves and stems—a seed-bank jumpsuit. In an uncommon gesture, the show closed with two versions of “The Star-Spangled Banner”: Jimi Hendrix’s Woodstock guitar squall gave way to a choir of children, who seemed to be calling out from a decade more optimistic than our own. 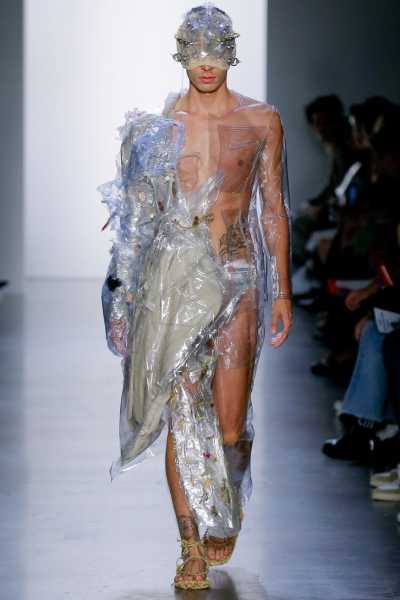 A runway look from the Parsons graduate Sho Konishi. 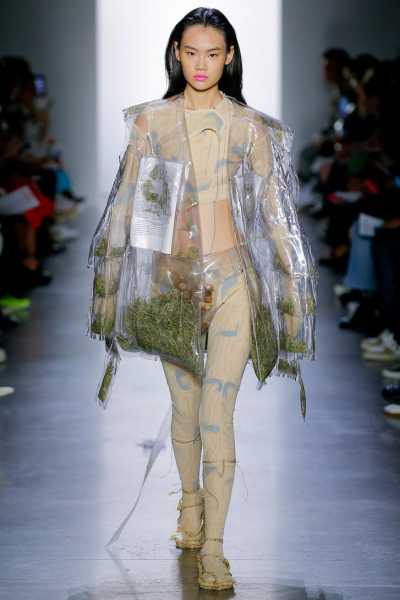 A runway look from the Parsons graduate Sho Konishi.

One wrinkle to New York Fashion Week is that some of the most artful American designers instead prefer to show in Europe (Rick Owens, Virgil Abloh) or by private appointment (Kate and Laura Mulleavy, of Rodarte). Consider the case of Thom Browne, the creator of sharp suits. He shows his spring collection in Paris, but in New York he created a performance-art promotion, titled “The Officepeople,” for the début of his fall womenswear line at Bergdorf Goodman. Around the appointed hour of 5 p.m., the Thom Browne operation converged on the Pulitzer Fountain, at Manhattan’s Grand Army Plaza, opposite the Plaza Hotel, due north of Bergdorf Goodman’s women’s store. The staffers and celebrity guests all wore Browne’s clothes, which elevate traditional men’s tailoring with conceptually fascinating details, with the aid of insanely expensive craft and detail. Around 6 p.m., the models, whom we ought to call performers, arrived. Two abreast, performers of at least two genders filed down the sidewalk in identical gray suit jackets and identical gray pleated skirts. They were like Vanessa Beecroft fembots playing the desk jockeys of “The Apartment.” They were sleek, like ambulatory Eames stools. These luxurious drones carried their identical Thom Browne briefcases over to the fountain and opened them to eat identical melancholy sandwiches. The office workers were interrupted in their eating by an approaching street musician, a trombone player, who also wore Thom Browne, of course. The trombone player opened with a sadness in his tune, but then he tossed the instrument’s mute into the fountain and slid into something whimsical, offering a moment of wonder before the models dispersed and filed into the department store.

Browne explained to me that the fountain is important to him as a cinematic touchstone. He cited “The Way We Were,” in which Robert Redford encounters Barbra Streisand beside it while coated in a fetching trench. He nodded cordially when I observed that Cary Grant wore the most significant gray suit in all of cinema in Grand Army Plaza, in “North by Northwest.” There is a Hitchockian quality to Browne’s vision, a surreality to his sharp cuts; the identical skirt suits turned all the performers into Roger O. Thornhill, or someone like him, in the manner of a “Vertigo” makeover done on an industrial scale. It looked like the best of all possible uniforms for a conformist dystopia. 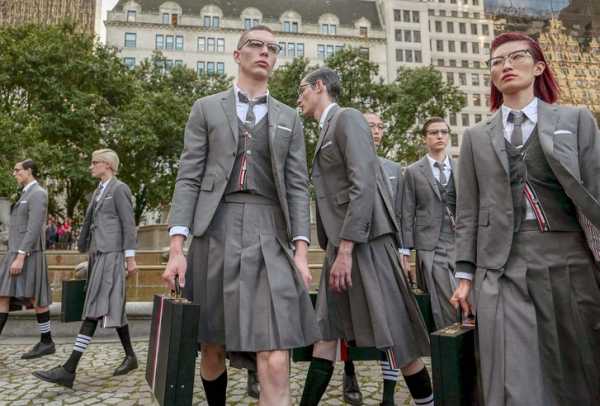 Whereas the point of the Thom Browne project was to contextualize high-end clothing in urban life, the project of Pyer Moss’s show was to put it in the context of black lives—which meant, at some times, an atmosphere of church and, at others, an open bar sponsored by Hennessy. The show was at the Kings Theatre, in Brooklyn, around the way from the childhood home of the designer Kerby Jean-Raymond, and there were notes of Sunday-best splendor to the collective costume; it was also a good night for a white jumpsuit. This was the third part of a trilogy of collections, titled “American, Also,” which is conceived to reconcile American myth and black history. This installment’s title is “Sister,” in homage to Sister Rosetta Tharpe, whose example taught Bob Dylan and every other guitarist how to go electric. The show began with a band of brown men in white suits assembled in the orchestra pit. The guitarist plinked a bit, just the first four notes of “The Star-Spangled Banner,” and the thing began. I have half a mind to keep the security wristband from Kings Theatre on my arm like a Cartier Love bracelet—it’s in questionable taste, I know, but this brand has taste to burn, as exemplified by the radiant colors and elegant drapes of the gowns. 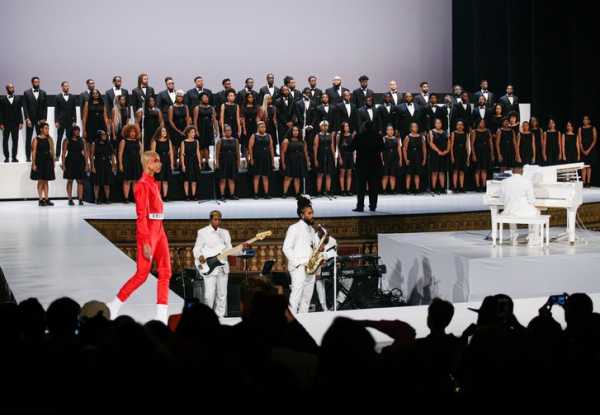 The project of Pyer Moss’s show was to put high-end clothing in the context of black lives. 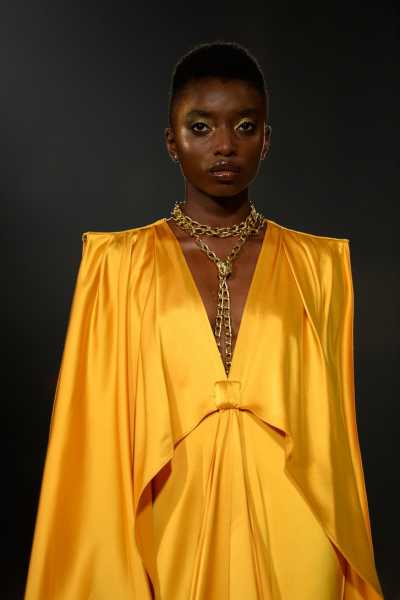 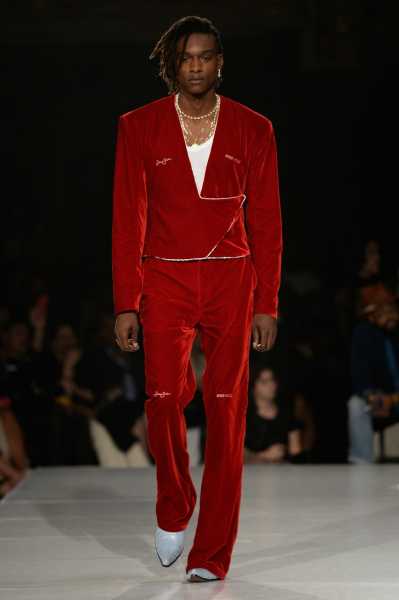 There was a homily on politics that got an amen, and a seventy-one-person choir, properly called the Pyer Moss Tabernacle Drip Choir Drenched in the Blood, according to the show notes. The Pyer Moss Tabernacle Drip Choir Drenched in the Blood flowed from gospel to Anita Baker as the men and women went around the runway, at an easy pace—a quiet-storm pace that was very much in contrast with the agitated power-walking of so many shows, with their see-now-buy-now breathlessness. The crowd hooted and cooed when an especially striking yellow dress appeared, like a mustard sunrise. The choir got hotter, flowing from “Proud Mary” to Lil’ Kim as the evening clothes flowed into Reebok workout gear and back again, grandly. “Sister” was an invitation to look at élite fashion as populist art, centered in a community. The production transformed the marketing of some smart garments into a message full of useful beauty. The clothes went around once more. Jean-Raymond took his bow. Again the guitarist eerily plinked a hint of the Banner, as if questioning it. Everyone stood, and went.

There are 7,000 pairs of shoes outside the Capitol. Here’s why.