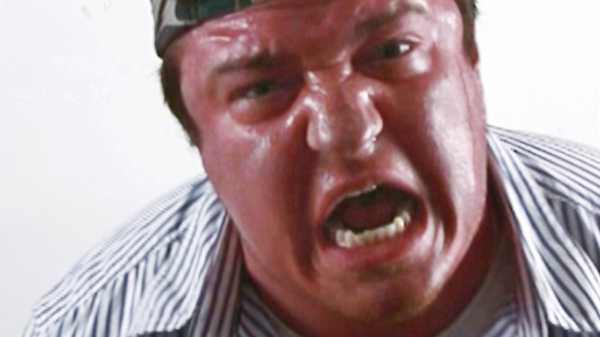 This video, titled “Fraternity,” which I made in 2007, while studying at Yale University, depicts a performance of masculinity and élite-white-male rage, and was filmed inside the fraternity house of the Yale chapter of Delta Kappa Epsilon (DKE).

At the time, I knocked on the door of the DKE house and was welcomed in by a fraternity member. I asked whether they would be willing to participate in a shouting competition, to help me make a video artwork. The winner, I explained, would be given a keg of beer. I chose beer because it seemed like the obvious prize for any frat-house game, and because it could be shared with all participants. They kindly agreed to collaborate. I showed up a few days later with my video camera, tripod, and the beer keg. Each participant tried to scream as long and as loud as possible for the video camera. They were excellent performers, and I thanked them for helping me make the video. One participant was particularly outstanding. He was so good at shouting that I worried he might burst a brain vessel. He won the prize, and the beer was shared around. It was a fun evening.

The reason I am returning to this modest art-school video, more than a decade later, is because I find this performance resonant with certain aspects of Brett Kavanaugh’s Supreme Court nomination. Kavanaugh also studied at Yale, and he belonged to Delta Kappa Epsilon, as did former Presidents George H. W. Bush, George W. Bush, Gerald R. Ford, and a long list of other powerful white men. Yale’s DKE chapter has long been regarded as a seedbed for political leaders.

During Kavanaugh’s Senate Judiciary Committee hearing last Thursday, I was struck by the defensive attitude he took to questioning. He enumerated a long list of accolades and accomplishments, including his education at Yale, as evidence of why he deserved to be a Supreme Court Justice. But the way in which he responded to some of the senators’ questions made it clear that he had followed that path of élite privilege without ever seeming to think that his actions may have hurt others. Indeed, the mere suggestion that his alleged actions might have hurt Christine Blasey Ford, or any of his other accusers, filled him with rage. He was angry that the career advancement that he felt entitled to might be taken from him. It seemed clear that Kavanaugh is more vested in his own career than in protecting America’s civic and social fabric.

I feel that the performance of masculinity (not the individuals themselves, who must be understood as actors) depicted in this simple video resonates with Kavanaugh’s entitled, defensive rage, as well as that of the angry Republican senators on the Judiciary Committee who also lashed out at questioners. I hope the video gives viewers pause to consider how, sometimes, the toxic forms of masculinity that are fostered in élite school systems are not simply allowed to exist at the highest levels of government but seem almost required.

By extension, I feel that the video resonates with the defensive anger of an entire population of voters, many of whom are white men, who elected Donald Trump to office. Those men may not be from the élite, like Kavanaugh, but, like him, they fear losing their privilege in a changing society. Trump, who is a showman, is an expert at exploiting the spectacle of their fear and manipulating their anger for cynical political opportunity. Kavanaugh has chosen to channel the same rage.

North Korea canceled a meeting with Mike Pence. Here’s what they...