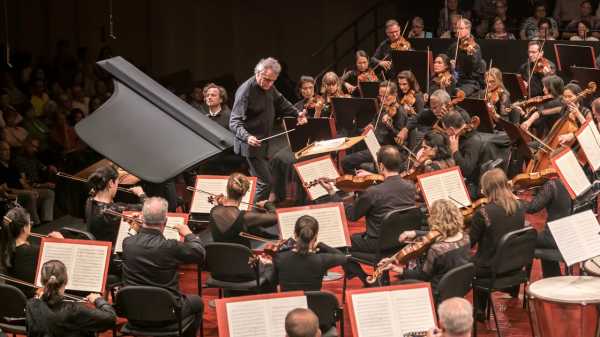 New Yorkers who can hustle to Lincoln Center on Wednesday night for the second of two performances, of works by Mozart and Brahms, by the pianist Martin Helmchen and the Mostly Mozart Festival Orchestra, conducted by Louis Langrée, are in for a delightful set of musical revelations. When I saw the conductor and orchestra perform a decade ago, I had the sense that he seemed to strip the varnish from familiar music; this time around, his interpretations are deepened and extended, owing both to his own further insights and to his collaborative partnership with the insightful pianist.

From the start of Tuesday night’s performance—with Mozart’s brief overture to the opera “Don Giovanni”—Langrée and the orchestra gave the music a supercharge, with a rasp and a roar that suggested musicians playing on the edge of the seat with their own excitement. The second piece, a mighty one, Mozart’s Piano Concerto No. 20 in D minor—one of the most passionately expressive instrumental compositions of the eighteenth century, and one that, in brief remarks to preface the concert, Langrée cited as a forerunner of nineteenth-century musical Romanticism—proved the illuminating force of the conductor’s ideas. Relying on historically informed performance practice with a modern-instrument orchestra, stripping the vibrato from strings and shortening bow strokes, Langrée created a transparent sound that revels in details. He doesn’t sacrifice the melodic line but, rather, reveals the elaborate intricacy with which its apparent simplicity is formed.

When the pianist, Helmchen, made his entrance, it was with a sense of shock—his very touch is distinctive, bold, and imaginative. His sound is assertive, even percussive, as if he strikes the keys all the way down to the bottom of the keyboard, but never crude or clangorous; even as the music’s passions surged, his forthright tone stayed rounded but dry and clear. Under Langrée’s conducting, the violins, using bow strokes that, rather than tapering, sharply broke off, laving dramatic silences on the surface that open space for inner voices—and for the enormous complexity of the piano part, which was revealed in Helmchen’s mercurial yet firm-fingered touch.

Remember the scene in “Amadeus” where Mozart was told that one of his compositions had “too many notes”? This concerto performance displays, gleefully, just what that means—and why Mozart’s music, which may have been disturbing to the ears of his contemporaries, can still shock listeners today. Helmchen played virtuosic cadenzas, from the second half of the nineteenth century, by Clara Schumann, in honor of her bicentennial, which reinforced the concerto’s forward-looking intensity. Its stormy and dramatic power—as in the second movement, whose central section contains a furious outburst—seemed to put the audience inside the engine of Mozart’s creative fury, which also included whimsy and humor, as in the pianist’s playful ornamentation of passages in its galloping third movement.

After intermission, Langrée and the orchestra returned, for a spirited and multifaceted performance of Johannes Brahms’s Symphony No. 3 in F major. There are a lot of notes in Langrée’s Brahms, too, and the sound is no less transparent than it is in his Mozart—but, with a much larger orchestra for this late-nineteenth-century work, he unfolds the wide variety of the composer’s sound world, emotional range, and experience. The impetuous ardor with which Langrée launched the symphony’s thrusting start soon gives way to lyrical passages in which he savored the ambling allure of quiet details—which, for all their breathtaking melody, are no less intricate and polyphonic, foreshadowing complex twentieth-century modernism. Brahms is also the primordial master of classical rock and roll, with his jagged and rhythmically obsessive power chords, and Langrée had the string section slash its way through such passages with strokes of an appropriate near-violence.

The popular Brahms of the Hungarian dances was evident throughout, too, in sections that lilted and juked with grace and power—the waltz-like opening of the third movement nearly lifted me from my seat, but it was followed by a passage, where cellos and winds passed a delicate melody back and forth, of a breathtaking beauty. The filigreed serenades of the wind section were in the foreground throughout—the growl of the contrabassoon was delightfully prominent—and the timpani rolled with a primal thunder. The climactic ecstasies of the final movement had the sense of a cosmic event, as if Brahms were unleashing a compact version of a Wagnerian apocalypse. In catching the symphony’s kaleidoscopic inventiveness—thrashing, delicate, complex, pastoral, titanic, dancelike, joyful—Langrée, with a vast imaginative sympathy, delivered the composer’s essence.

Zelensky Has Not Recently Requested Talks With Putin, Kremlin Says