Home Culture A Search for My Grandmother’s Lost Chicken Paprikash | 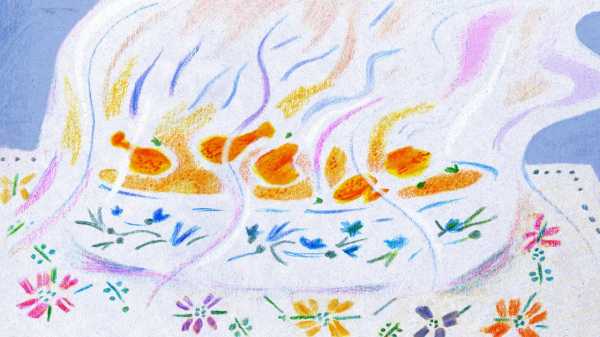 Eastern European soul food, for me, begins in Bangkok. Where else would one expect to find an expert on chicken paprikash? My family’s last surviving one lives there, with a street cat called Mango and her half-Thai, quarter-Indian, quarter-Hungarian-Jewish, entirely American grandson. She’s seventy-six, with a bad hip, but I needed a taste of the rich, paprika-red oil of my childhood. What else could I do? I begged her to visit.

From Edinburgh to Chicago and from Long Island to Mexico, my forty-odd cousins and I are united by a common yearning for the food cooked by our grandmothers, eight long-dead Hungarian sisters. Well, Hungarian-ish. My maternal grandparents, who settled in London, were a familiar mystery: Jewish, emphatically foreign, faintly garlicky, glamorous, formal, funny, heartbroken. They protected us from the horrors of the past, and we knew not to ask. They wrote in Hungarian and spoke Hungarian together but refused to go to Hungary. Indeed, they claimed to be Czech.

Poor, confused oldsters, I thought. And, gingerly, before it was too late, I began to probe. My grandparents, I discovered, were born under the Austro-Hungarian Empire, as citizens of extinct Ruthenia, and raised in neighboring Czechoslovakian towns in Transcarpathia, which is now in Ukraine. They learned to read in Russian, went to university in Prague, considered themselves hybrid Hungarian-Czechs and, eventually, proud Londoners, lifelong Labour voters yet devoted to “the Kveen.” But they never stopped cooking Hungarian food; in fact, they made us addicts.

We, the British contingent, were passionately greedy about the meals cooked by my octogenarian grandmother and her surviving sisters, usually in tiny London kitchens after a six-day work week: roast goose for Christmas, cold sour-cherry soup and sweet cabbage dumplings, jellied pike, ox tongue and schnitzel, cakes made of walnuts and poppy seeds, pancakes with lemon and curd cheese, stuffed peppers, buttered noodles, marzipan galore. The smell of home was garlic; caraway and paprika were how food should taste.

But the role of grandchildren is to move forward and forget, to become far too busy for the laborious, frugal food that fortified our childhoods. I don’t have a mincer for the meatloaf I yearn for; stuffed cabbage would lift my heart, but who has time for blanching each leaf? My cousins and I are clueless, untethered; like them, I barely bothered to ask my grandmother for recipes, and when I did she wasn’t helpful. “Vinegar? Such much.”

Now she is gone, and I hunger for the meals of my childhood more than ever. No, I don’t want the Internet’s folksy, sanitized versions; I want her. Luckily, the culinary gene has lived on in Thailand, in Judit, the first-born daughter of the second generation, whose flat is alternately scented with Hungarian, Thai, and Indian cookery. Once, by e-mail, I consulted her about my grandmother’s chicken paprikash: her ur-dish, a Hungarian standard. As a gluttonous child I would secretly gorge on it, smearing off the cold scarlet fat with a guilty finger, poking deep for the clean segment of white meat along the breastbone. Judit’s answer was distressingly vague, so I never tried to replicate it; as all heirs of the displaced know, incorrect soul food will break your heart.

But I was in no position to criticize. This past September, she came to London—a genuine Hungarian-Ruthenian-Czech-American in my kitchen, bearing chicken pieces and paprika in a cloth bag. Genealogically, this was the closest I’d ever get to the correct paprikash. Alas, the version Judit made, with bacon and mushrooms and sour cream, was extraordinarily delicious, but nothing like my grandmother’s; at least, not as I recall it from thirty years ago. Who can say? It’s lost.

Still, with Judit there, I did what any hypervigilant Gen X-er would do. I collected instructions, plus photographs and a video. Behold, Judit’s freckly arms, softer than I’d remembered; the small amount of tomato used in the sauce; the tiny dumplings for nokedli (Hungarian spaetzle), extruded into boiling water. If I could ingest every moment of the evening, feed my soul with what we have all lost, I would. Instead, I have only a nokedli pan, a gift from Judit to her pitifully sentimental cousin, and my father’s words, as he arrived and took a sniff—“Mmm, I smell foreign food . . . and foreign people”—and we smiled at each other. Foreign food: the scent of home.

Oprah will campaign with Stacey Abrams in Georgia