Home Culture A Search for Superior Rugelach, and the Harlem Baker Who’s Making the... 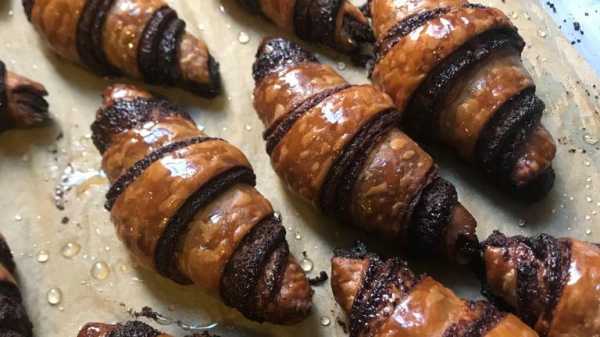 In an early chapter of “American Pastoral,” by Philip Roth (whose food writing I’ve celebrated before), Nathan Zuckerman, the novel’s narrator, describes the rugelach a former classmate has brought to their fortieth high-school reunion, “each a snail of sugar-dusted pastry dough, the cinnamon-lined chambers microscopically studded with midget raisins and chopped walnuts.” He continues: “By rapidly devouring mouthful after mouthful of these crumbs whose floury richness—blended of butter and sour cream and vanilla and cream cheese and egg yolk and sugar—I’d loved since childhood, perhaps I’d find vanishing from Nathan what, according to Proust, vanished from Marcel the instant he recognized ‘the savour of the little madeleine’: the apprehensiveness of death.”

It’s a lovely, tempting passage. It’s also somewhat perplexing: Of all the delicious Ashkenazi Jewish foods out there—schmaltz-laced matzo balls, crispy latkes—Zuckerman was so greedily nostalgic for rugelach? When I picture rugelach, I see only sad little lumps of dough, often more turtle- than snail-like, somehow both dry and soft and filled with insipid jam or chocolate. (“Jewish clay,” my colleague Richard Brody, who is wise on matters both cinematic and culinary, says.) They are put out with coffee—at synagogue after Saturday morning services, at Yom Kippur break fasts, at every shiva ever—not because they are particularly tasty but because they are something: something sweet, something traditional, something to have. Maybe that’s why Zuckerman’s Proustian moment doesn’t come to much; in the end, Roth writes, he has “nothing like Marcel’s luck.” Or maybe rugelach only used to be good?

One notable present-day rendition can be found at Breads Bakery, the American arm of an Israeli chain, which has three locations in Manhattan. But Breads’s rugelach are very different from the kind most American Jews are used to. The bakery made a name for itself with its babka, an exceptionally rich and buttery loaf, ribboned with not just chocolate but thick swirls of Nutella. Breads makes rugelach, too, from a similar dough, and the results are akin to small chocolate croissants: crescent-shaped pastries with a thin, crisp yet puffy dough, its surface bubbled and glossy with butter.

I’d figured this was a savvy Parisian spin on an obligatory Jewish dessert. But when I talked recently to a co-owner of Breads, Gadi Peleg, I learned that it is a time-honored Israeli preparation. “I’m of Ashkenazi roots, and Eastern European roots,” he said. “The rugelach we sell at Breads Bakery are the rugelach of my childhood.” Like croissants, the rugelach is yeast-leavened and the dough is laminated, meaning layered with sheets of cold butter in a labor-intensive, finicky process. Peleg has grown to appreciate American rugelach—he’s partial to the ones at Russ & Daughters—“It’s just a different thing,” he said. (His only real gripe has to do with pronunciation: “I grew up with it being rug-eh-lach,” he told me. “And somehow I think arugula, the vegetable, came into the picture. And now everyone at the bakery says roog-eh-lach.”)

How did two such different pastries come to share a name? According to “The World of Jewish Cooking,” by the cookbook author and historian Gil Marks, croissants and rugelach (a Yiddish word meaning something like “little twists”) have a common ancestor, an Austro-Hungarian, crescent-shaped style of pastry first made at the end of the eighteenth century. In his “Encyclopedia of Jewish Food,” Marks cites a recipe, from a 1941 book, for “crescents or rugelach,” which calls for a yeasted dough made with sour cream and eggs. This seems to be a first step toward the rugelach that would become standard in America: “Here is a raised dough recipe minus the bogey of countless hours of rising and endless kneading,” Marks writes. At some point, the yeast fell out of fashion altogether: “Jewish grandmothers and mothers-in-law commonly baked batch after batch of unleavened rugelach . . . and then taught their techniques to future generations.”

America at large was introduced to rugelach not long after, when Mildred O. Knopf (the wife of Alfred, of publishing fame) put a friend’s recipe in her 1950 book “The Perfect Hostess.” Her version was unleavened, with cream cheese, as was a recipe published, in 1977, by another of Knopf’s friends, the cookbook author Maida Heatter. This recipe, Heatter’s grandmother’s, is what is believed to have catapulted rugelach to national fame, so that by the nineteen-nineties, as Marks mentions, Julia Child was making rugelach on TV.

“Most people didn’t know it was originally a Jewish dessert,” Joan Nathan, the reigning queen of Jewish cookbooks, told me the other day. Both Peleg and Nathan, who has published recipes for rugelach in many of her books, suspect that the widespread availability of Philadelphia cream cheese contributed to the popularity of the unleavened recipe. Nathan blames American rugelach’s decline in quality on Costco, which began to mass produce them, and on versions that are pareve, made with oil or margarine instead of butter and cream cheese, for reasons of kosher observance. “It shouldn’t be lumpy, it should be crisp in a way,” she said. “You want it to be cooked enough so that there’s a little bit of a crispness, that it melts in your mouth.”

The rugelach at Russ & Daughters have a wonderful flavor (particularly the ones made with an excellent raspberry jam), but I find them a bit dense and dry. Zabar’s sells three varieties, including sacks of a yeasted kind—which are labelled “homestyle” and are squishy and bread-like instead of flaky and rich—and a respectable unleavened version made by a small Park Slope bakery, Erica’s, which are carried by a number of other shops around the city as well. I’ve very much enjoyed the rugelach at my favorite Jewish bakery, William Greenberg on the Upper East Side, which are made with puff pastry, and glazed with a thin sheen of egg, sugar, and cinnamon that flakes off in your mouth.

But the only transcendent unleavened rugelach I’ve found are made in Harlem by a baker named Alvin (Lee Lee) Smalls. One day over the summer, I took a trip to his shop, Lee Lee’s Baked Goods, a small storefront on West 118th Street marked by a candy-striped awning and a white picket fence. Smalls, a black man in his seventies, has close-cropped salt-and-pepper hair and glasses that sit toward the end of his nose. He was alone in the quiet space, working the counter and also the kitchen, behind a swinging door. “It’s the down season,” he told me. I agreed that summer isn’t really the time for rugelach. “No, they don’t want the other stuff,” he clarified. “They want rugelach all the time.” Alvin (Lee Lee) Smalls, the proprietor of Lee Lee’s Baked Goods in Harlem. The business’s tagline is “rugelach by a brother.”

Smalls, who is originally from South Carolina, started his culinary career in high school, as a short-order cook in Myrtle Beach, but he didn’t get into baking until he moved to New York in the nineteen-sixties and got a job in the kitchen at New York Hospital. At some point, he came upon a rugelach recipe in the newspaper. He’s not Jewish, and had never heard of rugelach, but he clipped out the recipe and hung onto it for years. One day, he finally gave it a try, using a filling made from raisins and honey left over from baking cinnamon buns. He tweaked the ingredients over time, experimenting with different fillings. In 1988, he opened his first bakery, on Amsterdam Avenue (called Marion Smalls, after his father), and started selling rugelach there. They became popular with customers of all backgrounds. A Hispanic couple once described his operation as “rugelach by a brother,” and it stuck; that’s now the bakery’s official tagline.

Today, Smalls’s recipe includes pound-cake crumbs in the filling (“It has a nice lemon flavor to it,” he told me, “and I sprinkle it on there heavy so it’s crunchy”), and almond extract. But neither is his secret ingredient. In the kitchen, he let me watch him as he tossed the crumb onto his rolled-out dough, tearing off strips and forming them into little packages before placing them on a cookie sheet. Then he requested that I leave the room for five minutes. I don’t know what he did to finish the rugelach off, but I know that the end result was remarkable: rich, buttery, and exceptionally crisp, snapping and crumbling satisfyingly in the mouth. The chocolate variety was especially wonderful, its bittersweet creaminess enhanced by a nice dose of salt.

When I pressed Smalls on what possessed him to pursue rugelach perfection, he couldn’t really say. “They’re small and not too sweet, something good to have around the house, I guess,” he said. “It’s my blessing they come out this way. To me, it’s just a cookie.” It’s not just a cookie to the people who have Lee Lee’s rugelach shipped around the world, to Germany, to France—even, once, to Casablanca. When I asked him if Jewish customers tell him that his rugelach were just like the ones their grandmothers used to make, he laughed. “If I had a dollar for everyone who said that, I wouldn’t have to work no more.”