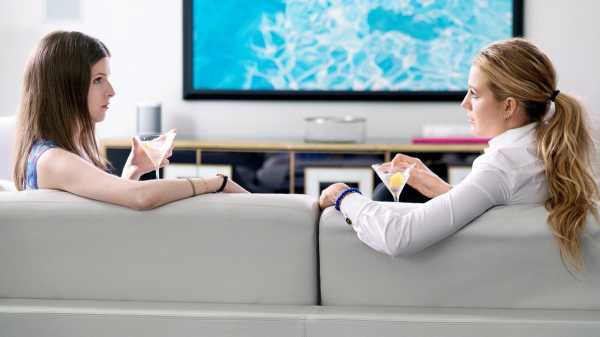 The performances by Anna Kendrick and Blake Lively in the mystery-comedy “A Simple Favor” are so invigorating, so generous with pointed inflections and snappy gestures, that they fill the movie’s good-humored, amply plotted emptiness. They’re two of the most creative performers of their generation; Kendrick twirls lines of dialogue with a lilt and a spin that keeps them up in the air for an instant before they land; Lively carries an element of melodramatic mystery that says with a glance what others strain to say with a tirade. The movie’s brisk and intricate action, anchored in a comfortable Connecticut suburb, allows them to hit a gaudy, giddy variety of notes, which hang on the movie’s busy framework like baubles on a Christmas tree, disguising the fact that it’s made of plastic.

Kendrick plays Stephanie Smothers, the widowed mother of a first-grader named Miles (Joshua Satine); she’s a stay-at-home parent of extraordinary energy and blithe enthusiasm, who volunteers copiously for community and classroom activities and works vigorously on her vlog for mothers, centered on cooking, crafts, and homilies. When Miles and one of his classmates, Nicky (Ian Ho) demand a playdate, Stephanie is thrust into the overwhelming company of Nicky’s mother, Emily Nelson (Lively), a flamboyantly chic public-relations executive for a New York fashion firm who lives in a high-styled house with her husband, Sean Townsend (Henry Golding), who published a best-selling novel a decade ago but hasn’t written much since and is teaching at a local college. The two women become fast friends, sharing martinis and confidences. Emily asks Stephanie for the “simple favor” of picking up Nicky after school so frequently that other parents think Stephanie’s being used as a nanny surrogate. Then Emily disappears, and—though the police are on the case—Stephanie decides to investigate on her own.

The movie, with a script by Jessica Sharzer, based on a novel by Darcey Bell, and directed by Paul Feig, sets up the characters of Emily and Stephanie with a fragmentary, exaggerated backstory that Lively and Kendrick manage to put over as integral and unified. Stephanie, a lifelong suburbanite, is volubly unsophisticated and self-deprecatingly uncool and filled with wonder and admiration for Emily, who breezily calls her a “nerd.” Emily flaunts her own life on the wild side, using R-rated language in front of the children, listening to French pop by Serge Gainsbourg, keeping a nude painting of herself in the family living room, drinking with connoisseurship, divulging intimacies profligately.

Both women, as it turns out, have secrets. (Secrets, Stephanie says in one of her vlog entries, are “like margarine: easy to spread, bad for the heart.”) It’s no surprise that the ones borne and withheld by Emily, who has a violent resistance to being photographed by Stephanie (“I’ll slap an injunction on your yearbook”), are of greater dramatic and legal moment. Stephanie’s investigation takes her on distant travels, requires her to play elaborately crafted roles, and reaches deep into Emily’s mysterious past. It’s no spoiler to say that, true to its murder-mystery format, clues are carefully planted to call into doubt the official hypothesis regarding Emily’s disappearance. Stephanie’s quest is motivated all the more by the shadow of suspicion cast on her by the police, in the person of the town’s Detective Summerville (played with wry humor by Bashir Salahuddin), as a result of her friendship with Emily’s husband.

“A Simple Favor” is a sort of collage, featuring thematic snippets from “L’Avventura,” “Vertigo,” and “Double Indemnity,” set in the updated turf of Douglas Sirk, in an archetypal suburb that’s decorated in the catchy bright colors of the Hollywood sixties. The movie’s other locations, in Manhattan and more distant venues, as well as the characters who inhabit them, are—with the exception of one formidable character, played by Jean Smart—mere stereotypes. (There’s also one comedy bit, by Sugenja Sri, as a receptionist, that must have been difficult for her to perform without cracking up.) But, for all the pinging, zippy dialogue and the resonant situations, Feig doesn’t manage to extract much substance from the teeming, incident-packed story.

The drama is heavily backloaded, with a late-breaking information dump (reinforced with flashbacks) that fills in more of the characters’ backstories; to delve into it would be spoiler-y, but suffice it to say that neither the woman of flashily mysterious glamour nor the one of folksy homespun cheer has had an altogether easy or simple life. Neither one entirely fits into the normative texture of the suburb (a virtual Greek chorus of their fellow-parents, played by Kelly McCormack, Andrew Rannells, and Aparna Nancherla, makes fun of both), but that very texture remains as unrealized as the two women it foregrounds. The neighborhood, though conspicuously diverse, remains utterly undefined; politics, religion, local issues, philosophical affinities are effaced in the interest of a tightly interlocking story that somehow runs three minutes shy of two hours despite lacking any of the sorely missing digressions of community life.

“A Simple Favor” ’s hollow collection of stylistic elements has an aspirational swing, emphasized by the Franco-pop soundtrack and the alluringly tinted imagery of the end credits (by David Clayton), which sends a viewer home with a sense of what Feig had hoped to achieveby way of his own directing. The wonder of it all is that Kendrick and Lively have the ability to paper over all that’s missing from the film and offer it—at least, for the duration of the viewing—a satisfying illusion of fullness.

A migrant child was returned to his mother covered in lice,...