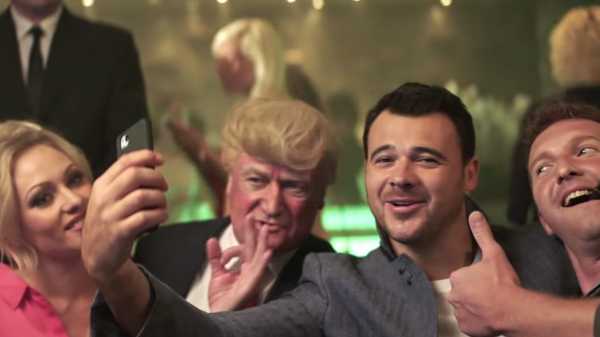 On Tuesday, Emin Agalarov, the aspiring international-pop-star son of an Azerbaijani-Russian billionaire, released a music video that is, for now, the most perfect art piece of the age of Trump. It is a commentary on the anger and confusion that dominates our political environment but is, also, an active participant in that confusion. It might be, I would guess, the first-ever music video that could be used as evidence in an impeachment trial—though it’s difficult to say whether it could be used to prove Trump’s guilt, or his innocence, or our inability to ever know anything about the man. It is also, at its core, a tacky and desperate attempt for public attention; and that fact, too, makes it feel like an essential reflection of our current era.

The video, for a song called “Got Me Good,” begins with a man sitting in front of a wall of computer monitors—a hacker in Russia, it seems—and on those monitors we see real footage of the singer, Emin Agalarov, talking to the real Donald Trump. After all, they really are friends—in 2013, Agalarov and his father, Aras Agalarov, partnered with Trump to bring the Miss Universe contest to Moscow. (At that time, Trump made a previous, willing cameo in the music video for Agalarov’s song “In Another Life.”) Then the video shifts to a scene in which Emin walks through a hotel hallway with a Trump impersonator. They exchange a briefcase implied to be full of cash, as Emin sings to the Trump actor, “I wish you at least could be honest. I wish that you told me the truth.” Soon, they are frolicking in a bed with several women.

What makes this more than a silly spoof is that Emin Agalarov is one of the only people in the world who might have firsthand knowledge of what Trump did or didn’t do during his brief trip to Moscow in 2013. He was Trump’s primary companion during that trip, which included Trump’s stay in the Moscow Ritz-Carlton, the scene of the famous pee-pee tape allegation in the Steele dossier. It was Emin who asked his publicist at the time, Rob Goldstone, to set up the meeting in Trump Tower between Donald Trump, Jr., Jared Kushner, Paul Manafort, and a group of people close to the Kremlin and the Russian spy services. At first, Agalarov’s new video seems to be almost a confession: here is a man at the center of this scandal, reënacting it, and telling (or singing to) Trump that he is a dishonest man.

As the video continues, though, things get more confusing. Actors playing Ivanka Trump and Jared Kushner appear, also taking briefcases from Agalarov. Then, actors playing Hillary Clinton and Mark Zuckerberg join in, drinking with the Trumps and Agalarov and taking what appears to be money, too. Finally, for some reason, there’s a Stormy Daniels look-alike taking something mysterious but clearly valuable out of a garbage can. Is this testimony? Or is it nonsense?

I met Emin Agalarov a year ago, in May, 2017, a few months before his role setting up the Trump Tower meeting became public. He was at Lincoln Center, preparing for a concert, part of his biggest-ever U.S. tour—Hartford, Chicago, L.A., Miami, New York. Emin told me he’d realized that he would never be a huge star. “I’m thirty-seven years old,” he said. “There hasn’t been any thirty-seven year old superstar.” He had been a singer in the U.S. in his twenties, living in Tenafly, New Jersey, then went back home to Moscow and spent a few years performing, often in venues owned by his father, who is the shopping-mall king of the Moscow area and a developer of choice for Vladimir Putin’s favored projects. Emin told me he is as much a businessman as a musician, working closely with his father. “There is a way to turn music into a business,” he said. “To monetize it.” He explained that Russia is a tough market for a musician. There is such widespread piracy that it’s hard to make money from selling downloads of songs, and concerts aren’t as lucrative as they can be in the U.S. But, he learned, having songs that do well with streaming services internationally can mean real money. He was trying to cultivate an audience in America—some Russian, some not—who would stream his songs.

I thought of that conversation when I watched this new video. “Got Me Good” is not a particularly good song. If not for the video, it’s unlikely I’d have ever heard it. Agalarov is a fine-enough singer, but the music is generic, soft jazzy; the lyrics aren’t catchy. I’ve watched the video four times today and can’t remember any of them. But the video will be shared and tweeted and talked about, and the song, presumably, will be streamed, as people hunt for clues that might solve the greatest political mystery of our time. It’s a safe bet, though, that the video contains no such clues. It’s more likely that it is simply a silly effort by a narcissistic overgrown boy using his dad’s money to put himself in the center of things, make a buck, get a bit of fame, and have some fun laughing as the rest of the world tries to figure out what, if anything, he is telling us. Like I said, it is the perfect video for this age.