Home Culture A Story About Fred Trump and Woody Guthrie for the Midterm Elections... 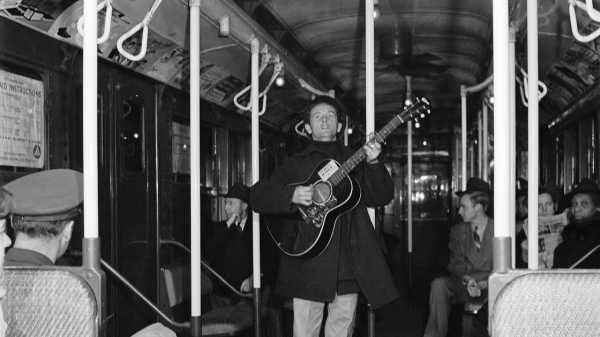 In 1950, Woody Guthrie moved into an apartment at Beach Haven, a cluster of buildings in Brooklyn. His landlord was Donald Trump’s father.

In 1950, Woody Guthrie moved into an apartment at Beach Haven, a cluster of sixteen residential buildings in Gravesend, Brooklyn, just a few minutes from the creaky boardwalk and frankfurter stands at Coney Island Beach. The complex was owned and operated by Fred Trump, which means that, for the two years Guthrie lived and wrote there, Trump was his landlord. It remains unsettling to accept that their signatures co-exist on the same lease agreement.

In the nineteen-seventies, Fred Trump was accused by the Civil Rights Division of the U.S. Justice Department of creating a “substantial impediment to the full enjoyment of equal opportunity” at Beach Haven; it appeared that he didn’t like to rent apartments to black people. (The case was eventually settled.) The complex’s reputation hasn’t improved much in the intervening decades. In 2016, Beach Haven, which is now operated by Beach Haven Apartments Associates, was fined for dumping two hundred thousand gallons of untreated sewage into Coney Island Creek each day. It remains the largest fine that the New York State Department of Environmental Conservation has ever levied against an apartment building for the mishandling of human waste.

Guthrie didn’t much like the place—he took to calling it “Bitch Havens” in his correspondence—and, in 1954, he wrote a delightfully scornful song about Trump’s discriminatory rental policies. Several handwritten drafts of the lyrics—sometimes titled “Beach Haven Race Hate,” “Beach Haven Ain’t My Home,” and “Old Man Trump”—are presently on display at the Woody Guthrie Center, in Tulsa, Oklahoma. Will Kaufman, a professor of American literature and culture at the University of Central Lancashire, in Britain, was the first researcher to discover the lyrics in Guthrie’s considerable archive. (Guthrie never recorded or published the song.) Earlier this week, I went to see them in person. The first verse is explicit in its indictments:

In his best songs, Guthrie is equally seized by feelings of outrage and hope. Listening to his records is still my favorite way to remember that those feelings can productively and even beneficially co-exist—that the latter doesn’t necessarily have to eradicate the former. Guthrie clung to an optimistic belief in the generosity and decency of all human beings. In the end, he believed, we would surely do right by one another. In 2013, Jay Farrar, Jim James, Will Johnson, and Anders Parker recorded a version of an unfinished Guthrie song called “Hoping Machine,” for a tribute record called “New Multitudes”:

Whatever you do, wherever you go
Don’t lose your grip on life and that means
Don’t let any earthy calamity knock your dreamer and your hoping machine
Out of order

Guthrie’s idealism feels especially remarkable, given his family’s troubling history. Both Guthrie and Donald Trump had fathers who can reasonably be accused of repugnant (and illegal) behavior. It seems likely that Charles Guthrie was involved in the Ku Klux Klan, and played some role in the horrifying lynching, in 1911, of Laura and L. D. Nelson, seven miles southwest of Okemah, Oklahoma, Guthrie’s home town. In 2000, photographs of the lynching were displayed at a gallery in New York City, as part of an exhibition titled “Witness: Photographs of Lynchings from the Collection of James Allen.” In one, a scrum of onlookers crowds a railroad bridge, while the Nelsons’ bodies swing, lifeless, over the North Canadian River. It is a ghastly image. Was Charles on the bridge? Had he been part of the gnashing mob of robed men who dragged the Nelsons from their jail cells? (Fred Trump, too, could have been affiliated with the K.K.K.: in 1927, the New York Times reported that he was arrested at a Klan rally in Jamaica, Queens, though the precise circumstances of that arrest remain unclear; the President, for his part, has said that the arrest never happened.)

Guthrie worked vehemently to spread and express deep empathy for his neighbors. Now Guthrie’s trajectory feels like an antidote to Donald Trump’s: sometimes, within a single generation, everything can and does change. “We’ll show these fascists what a couple of hillbillies can do,” Guthrie announced on a 1944 radio broadcast, before launching into “All You Fascists,” a ninety-second song about bending the arc of history:

Guthrie sounds giddy singing it—as if he were certain that the benevolence of humankind would inevitably prevail. Gazing at his lyrics, in Tulsa, the morning before Election Day, I felt a brief and welcome punch of faith.

Scott Kelly’s genes and NASA’s twin study on him, explained

One last throw of the dice for Andy Murray in injury-ridden...