Home Culture A Tribute to Edie Falco as Carmela Soprano | 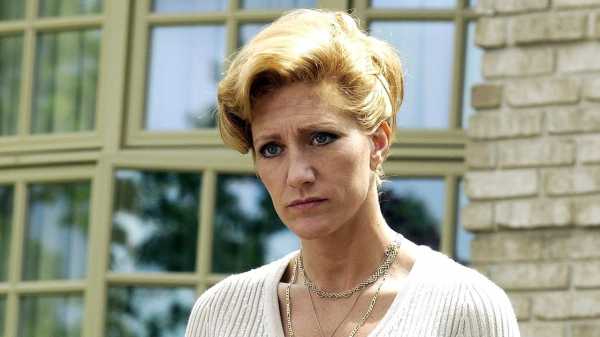 When Edie Falco discusses her relationship with James Gandolfini, with whom she created one of the most complex and moving portraits of marriage ever shown on television, she sometimes admits that the two didn’t know each other very well. She recently told the “Today” show that, during the eight years of “The Sopranos,” they never got close. “I really did not know much about his personal life,” she said, “just what the rest of the world knew.” On one level, this distance is surprising, but, on another, it makes a kind of emotional sense. Falco’s performance as Carmela Soprano, the sharp, bejewelled wife of the mobster Tony Soprano, had a wholeness and an independence to it; it was never defined by Gandolfini and her other scene partners, however excellent they were. Especially when crying, Falco was virtuosic. I recently rewatched “The Sopranos”—as many fans were inspired to do as the show marked its twentieth anniversary, this January—and I was struck again by Falco’s ability to make herself, through fleeting expressions of sentimental piety or grief, the linchpin of the show’s explorations of moral frailty.

Carmela is also just such a great character. Some of her best moments come when she is expressing bemusement: a wide-eyed face of surprise that she makes when life just doesn’t turn out her way—when her crush Furio doesn’t come in for coffee, or when she hears on the phone that Adriana has suddenly left Christopher, Carmela’s cousin, shortly before they were to be married. (In fact, Tony has had Adriana whacked, for being an F.B.I. informant; Carmela suspects this and dreams about Adriana throughout the rest of the show.) Carmela could be both tactful and tacky, and her insights about other people—such as a flirty priest who chases the “whiff of sexuality” through overinvolved emotional relationships with parish housewives, Carmela included—coexist with severe blind spots about morality and judgement.

Carmela’s daily encounters with marital and parental frustration are made sharper by the painful knowledge that, no matter what, she is trapped in a state of moral compromise. She is committed to her family, but her discomfort with her situation, habitually repressed, emerges at inopportune times. When her daughter, Meadow, calls to say she’s getting married, we see Carmela’s face twist into a sudden, convoluted expression of dismay and self-pity. “Are you crying?” Meadow asks, mistaking the bitter tears for tears of happiness. In another scene, the camera catches her in medias res, after she’s unburdened herself to a therapist. She looks at the doctor with damp raccoon eyes, her brows arched in an expression that’s at once downcast and defensive. “Everybody’s marriage has problems,” she says, deflecting his advice that she should leave her husband. Chin trembling, Carmela, a sanctimonious Catholic, pivots to a weird comment about the doctor’s religion.

But Falco gave even Carmela’s hypocritical piety an affecting, robust texture. In Season 3, Carmela and Meadow go to see an exhibit at the Brooklyn Museum. Trailing through a field of Rodin sculptures, Carmela stops, awed, in front of Jusepe de Ribera’s “The Mystical Marriage of Saint Catherine.” The camera focusses on her upturned face as she examines the painting, and her eyes well up with tears. Carmela employs her Catholicism selectively, extracting forgiveness for her misdeeds when she needs it, but here we see another thing that her faith has given her: the ability to gaze with a maudlin but sincere affection at a piece of religious art. “Look at her, so at peace, the baby’s hand against her cheek,” she murmurs to Meadow, riveted by the saint. Falco plays the moment completely straight, and Carmela’s genuine connection to the painting is one that we can’t quite bring ourselves to deny her.

Both Carmela’s and Tony’s commitment to their marriage could be read as rotten or self-interested, but Carmela’s could also just seem romantic. After Tony is shot by his uncle Junior and goes into a near-fatal coma, he spends several episodes in a dreamscape, where he is a businessman who has misplaced his wallet and can’t get home. Back in the world of the living, Carmela provides the plotline’s emotional heft, grieving while surrounded alternately by her bratty children or by inept mobsters who are not so privately wondering how long she’ll keep her throne. Carmela paces Tony’s hospital room, playing him CDs from her car and kissing his bald head, with the sound of his breathing machine going in the background. These episodes in the hospital contain the show’s most loving scenes, but Gandolfini doesn’t even have any lines. Perhaps that’s why the scenes are so tender: we see Tony as only Carmela can, as a kind of fantasy husband, devoid of brutishness, whose image is founded on her teen-age memories. “Your friends all love you. Your kids love you,” she tells him.

At one point, a doctor informs Carmela that Tony won’t make it. As he strides away, the camera lingers on her face, and we watch Carmela weep, for nearly a minute, alone in the hallway. It’s a different kind of crying from what we see during her famous argument with Tony in the episode “Whitecaps,” in which they decide to (temporarily) split. Here, her tears are pure and not at all self-recriminating. In this moment, it’s impossible not to empathize deeply with her. Her silent convulsions convey as much as a monologue: we see death’s immediacy occur to her in waves as she shudders, flaps her hands, hugs herself helplessly. We understand that her failure to leave Tony is something more than a symptom of denial. It’s clear that she also really loves him.

“The Sopranos” posed many queasy questions to its viewers. One was whether an evil person can be lovable. Another was about what happens when flawed people, armed with clear insight and an ability to reflect on their lives, still lack a meaningful capacity to do right. And it explored how insight, when ignored, perverts one’s ability to be happy, in specific and maddening ways. In the show’s last episode, Carmela makes that bemused face again, this time when she hears the jaw-dropping figure that Meadow will be pulling in at her new job, at a law firm. Carmela is at once happy and filled with spite—she can’t believe her daughter got away from the Mob life. Carmela’s guilt, culpability, introspection, and beautifully architected denial made her the most toxic character on the show and the sharpest articulator of what happens when people choose ill-begotten comfort against their better instincts. Though perversely appealing, Tony had few better instincts and almost no remorse. Gandolfini was good at showing how a person like Tony Soprano might simply combust when confronted with his own shortcomings—his dark eyes would flash, and he’d lash out. Gandolfini’s Tony was by no means a simple character, but, as Carmela, Falco gave a much knottier performance. Her ability to wordlessly convey the inner workings of someone in a virtually constant state of deeply felt but incomplete internal reckoning is what made “The Sopranos” a show not just about crime but about the complexity of morality.

The Saturday after the twentieth anniversary of the show’s première, I went on a long-operating bus tour of New Jersey sites that were featured in the filming of the show. I expected the tour, which was four hours long, to be tiring, but it was delightfully nerdy, and I found myself completely caught up in the sights, craning my neck to catch a glimpse of the various driveways where Tony had parked his car. During the tour, Falco came up only twice. When the guide directed my gaze to yet another low, beige building where one beatdown or another was filmed, I thought about how segregated Tony’s crime family was from his actual family: almost none of the locations on the tour would have been visited, let alone seen, by Carmela. And yet the gray sidewalks and underpasses where Tony committed unspeakable crimes all made me recall her. I almost expected to see Carmela walking down the street, at once knowing what kinds of things had happened there and firmly believing that she did not know.

About 400 People Arrested in Hong Kong During Protest – Police