Home Culture A Word of Thanks for My Compression Socks | 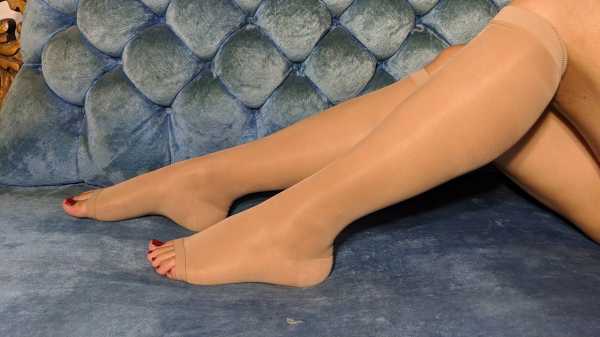 Modern compression socks were invented by Conrad Jobst, a dashing German engineer who lived in Toledo, Ohio, and suffered from varicose veins. He also developed precision gun sights for the U.S. during the First World War and patented the car sunroof, but compression socks, which he invented around 1950, were his flagship achievement. On paper, there’s not much to them: they’re very tight socks. Tightest near the ankle, but still pretty tight up top. They work by countering hydrostatic pressure in the wearer’s legs—that is, the bulging of the veins and tissues caused by fluid that’s been pulled down to the extremities and can’t get up.

It’s a phenomenon that I first encountered on a trip to India with my mother, to visit relatives, several years ago. I’d been making this journey all my life, with no physical consequences. Now, getting off the plane, I noticed that my feet had become distinctly puffy. The slope of my instep was as smooth and soft as a freshly fluffed pillow. The bone structure of my ankle had been swallowed in flesh. The swelling was still there the next morning, and the morning after that. My mother was having the same problem. I looked at my grandmother, sitting in a wheelchair, her feet permanently inflated like two dainty balloons: a vision of my genetic destiny.

Still, I thought little of the problem until a couple of years later, when I was planning what to wear to a friend’s wedding in South Africa. I hoped to wear a pair of shiny red heels, but then I pictured my feet as I knew they would be after the flight—as round and peg-like as a baby elephant’s. I turned to Google, which insisted that the way to prevent one’s feet from swelling on long-haul flights is to wear compression socks on the plane. I’d heard of compression socks as a remedy for deep-vein thrombosis, a condition that seemed as abstract and distant to me as amnesia or face blindness. But it appeared that, if I wanted to wear the heels, I would first have to wear this serious-sounding medical device, usually indicated for the bedridden, the elderly, the pregnant.

Compression socks are often marketed as “travel socks” and disguised to look like normal socks. You can find any number of designs online: argyle compression socks, or polka-dot compression socks, or patriotic compression socks. You could go silky and sleek or vaguely sporty. But I wasn’t going to have some novelty-hosiery company compressing me. Instead, I took careful measurements of the circumference of my feet, my ankles, my calves, according to instructions I found online (buy the socks too big and there’s no point, too small and they cut off circulation) and then headed to a medical-supply store on the Upper East Side as though I were shopping for a bespoke suit.

Amid the walkers and shower stools and adult diapers, the compression socks had half an aisle to themselves. There were dozens of pairs to choose from, of different heights and pressure ratings, but they were almost all solid black or nude. Some came in clear plastic bags without branding; others, from Jobst, the company started by Conrad, were packaged in flat little boxes with pictures of beautiful young models on coffee dates and at business meetings. I selected a classic style—just like the ones they use in hospitals—with a low pressure rating.

They are knee-high and flesh-colored, like pantyhose but thicker and without the sheen, so that they give my legs a corpselike pallor. The top couple of inches have a ribbed pattern, which leaves a deep imprint in the fat deposit between my knee and my calf muscle. The other end has no toes, almost like the tip has been cut off, but with another little ring of material, so you know it’s on purpose.

The toelessness is the ugliest feature of the socks (which have no attractive features) and the most likely to give them away as an assistive garment. But the pleasantness of having your toes free and accessible, to wiggle or splay or examine or scratch, is a revelation, particularly considering how difficult it is to get the socks on or off. They actually come with instructions, and there are plenty of tutorials on YouTube, mostly featuring attractive young women with long, lithe legs who exhibit no sign of venous insufficiency. There are also a number of devices that can help: the Jobst Stocking Donner, the Sigvaris Doff n’ Donner, the Juzo Slippie Gator. But there’s really no dignified way to go about it. There will be contortions and tuggings and bulges of flesh.

The method I’ve landed on is to scrunch the fabric up into a ring, put your toes in first, then unfurl the sock slowly, until your heel slips into place, and then on up the length of your shin. It’s a lot like putting on pantyhose, if your pantyhose were staging an active rebellion. You don’t want to pull too hard, because they will come up too high and the elastic is uncomfortable if it hits the crease of your knee. If you don’t pull hard enough, there will be bunching and creasing, making the sock too tight in the wrinkled areas. The aim, as you put them on, is to surrender to the tension of the fabric, to encase your leg in it like a caterpillar building its chrysalis. The only way to take them off is to peel them from the top, turning them inside out, like a wetsuit, gradually revealing the good work they have performed.

When I landed in Cape Town and unwrapped my calves, I found them untouched by the ravages of cabin pressure. I wore the heels to the wedding; my ankles looked great. But the socks also seemed to have an all-over salutary effect that I hadn’t anticipated. Benjamin Franklin, writing in 1780, argued that walking was the ideal form of exercise partly because it “occasions a great pressure on the vessels of the foot,” causing the soles of the feet to behave like piston pumps, activating movement throughout your physiology, with the result that “the fluids are shaken, the humors attenuated, the secretions facilitated, and all goes well.” I doubt modern science would fully support Franklin’s theory, but it resonates with my compression-sock experience: there’s something about starting at the bottom of your feet and squeezing all your excess up, as though you were a tube of toothpaste. Your body feels lighter, your head feels clearer, your limbs feel freer, and all goes well.

Or perhaps I’m succumbing to the spiritual effect that the socks have had on me as they’ve become a ritual part of my travel routine. The first time I wore them, I found them deeply embarrassing. I hid in the bathroom to put them on and made sure that they were always covered with real socks. These days, I put them on in the boarding area, for God and everyone to see. I feel a kind of pride in my proactiveness, my adaptiveness, my ability to admit my needs and then meet them. Wearing compression socks has become an act of self-assertion, an acknowledgement that my body is subject to the forces of the universe and a reassurance that, when necessary, I can exert forces of my own.

In “Gary: A Sequel to Titus Andronicus,” Taylor Mac Takes on...