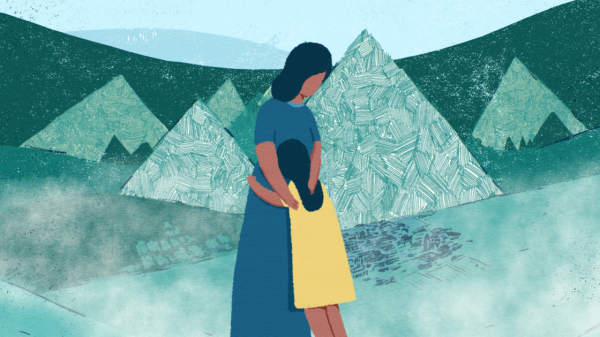 E.L. was twelve years old when a smuggler who was helping her family cross the border suggested that it would be easier if they separated.

Like another recent film featured on our site, “Best of Luck with the Wall,” the title of “A Line Birds Cannot See,” a nine-minute animated short directed and produced by Amy Bench, refers to the U.S.-Mexico border, and its contents provoke reflections about immigration and geography. Both films allow ample room for the viewer to imagine what we don’t see and hear. “Best of Luck” shows us aerial images of the border itself; “A Line Birds Cannot See” takes a nearly opposite tack—zooming in on one very personal story about crossing the border. In the film, we hear a woman recounting the perilous journey to the U.S., from Guatemala, that she took as a child. As she speaks, an animation, like a slow-moving series of paintings, shows mountains, sun, desert, a girl. The speaker, E.L., grew up in a rainy mountaintop village in Guatemala, in a violent household; eventually, she and her mother and siblings fled her father’s abuse and headed north. “We all left with nothing,” E.L. says.

Bench, who lives in Austin, Texas, is a cinematographer whose work has screened at festivals including Berlin, SXSW, Sundance, and the New York Film Festival. Before film school, she was a mechanical engineer. “Film is almost the polar opposite” of her former career, she said, and it raises very different challenges: in film, in order to sensitively portray your subjects, “You have to be open and vulnerable yourself.” Bench began working with refugees via a cinematography job—a project commissioned by Teen Vogue, about Syrian immigrants in Austin. “Listening to their stories made me want to do more work with the refugee and immigrant community,” she said. She contacted a number of local organizations that helped connect her to immigrants, and then spent several months interviewing people about their stories of coming to the United States. “I wanted to tell an immigration story from a female perspective,” she said. “I’m trying to get more female stories out there.” As a society, and in film, she added, “We’ve barely scratched the surface of exploring the richness and complexity in women’s lives. Even talking about what it means to be a woman has been so buried.”

Audio had advantages over video for the story-gathering process. “I thought that people would be more willing to share their story on audio, because there would be no risk of their identity being known,” Bench said. It also gave her more flexibility. “I didn’t need to hire a crew—it was just me in the room with a microphone, and it made it much more conversational.” But she knew that she ultimately wanted to make a film. E.L., a DACA recipient, had been in the U.S. for thirteen years, and she spoke English, which allowed her and Bench to communicate without a translator and establish a more immediate rapport. And her story resonated with Bench immediately—especially the parts about E.L.’s childhood and her relationship with her mother. Before they did their interviews, E.L. hadn’t talked much about her past. “She said it was like going to a therapist,” Bench said.

That sense of unburdening, and the emotion that accompanies it, comes through in the film. After E.L. and her mother and siblings fled, a smuggler who was helping them suggested that it would be easier if they separated, and E.L., who was twelve, found herself on her own. She managed to cross the U.S. border, and then met some other travellers. They asked a woman they encountered for food; the woman called Border Patrol. E.L. was taken to Ciudad Juárez, where she was kidnapped and assaulted; the kidnappers forced her to work on both sides of the border. As E.L. recalls all of this, her voice quavers with emotion. She seems to be crying. Then she continues her story: one day, in Texas, she knocked on the door of a house and, in Spanish, asked the woman who answered for help. The woman didn’t understand E.L., but she could see her: a child, tired, dehydrated, and thin. The woman didn’t call Border Control—she gave her clothes and shoes and fed her. “It was the first time I ever tasted lasagna,” E.L. says. There, you can actually hear her smiling.

Before she knew what the film would look like, Bench knew that she wanted to choose a form “that would appeal to people beyond the world of documentary,” she said. “Animation ultimately lent itself very well to that.” The imagery—featuring animation by Steve West and Thomas Kilburn—is at once rich and simple, like a well-executed children’s book. It enhances the experience of listening to E.L.’s story without distracting us or calling attention to itself. “I wanted the imagery to feel rich and painterly, more like an illustration and less like cartoon animation,” Bench said. The pace is gentle, with images proceeding slowly and changing bit by bit. “E.L.’s story is so verbal, it’s almost like a podcast,” Bench said, adding that the gradual changing of the animation “allows you to focus on her words and emotionally respond.”

Bench hopes to make three to five animated shorts about refugees. Her next subject is a South Sudanese man living in Colorado who’s applying for asylum in the U.S.; she plans to work with West and the same producer, Carolyn Merriman. Meanwhile, E.L.’s story is playing the festival circuit—SXSW earlier this year, DOC NYC this month. Though E.L. and Bench agreed that she should remain anonymous, E.L. wanted her story to be heard, Bench said. “I think it was when she started realizing that she was living a new life, completely different from where she came from—she didn’t want to lose that,” Bench said. “She thought it was important to speak out. She thought that sharing her story could help other people.”

How Rigid Alliances Have Locked Us Into Unwanted Conflicts

Expert: We Have Developed Implants for Growing New Bones